The second RPG session I ran during the Geomatics Carnival 2018 at UiTM Arau was DwD Studios’ BareBones Fantasy. This session had even less prep time than the Star Wars session I ran earlier in the day.

However, it turned out to be one of the most hilarious sessions I have ever had he pleasure of gamemastering in recent years.

The Day the World Burned

The day began like another day for the two adventurers the elven thief Mus and human warrior Kazuma (both at Rank 1) and their hireling Aqua, an archer, who were travelling through the wilderness on horses. Upon Kazuma’s shoulder was his faithful hawk.

The Blood in the Standing Stones

The light woodlands ended and a wall of dark twisted trees and dense thickets blocked their path. They were considering what to do when they heard a scream from beyond the wall growing before them.

Kazuma exclaimed, “We should go and investigate! Aqua, you’re with me!”

Mus yawned and said, “Good luck. I’m going this way.” He grinned and rode north away from the thick foliage. Kazuma muttered, “Forget him, Aqua. Follow me!” 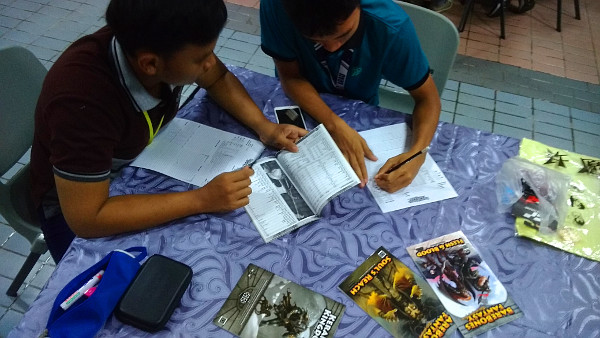 BareBones Fantasy allows for a quick character generation, I noted.

After Kazuma let loose his hawk into the air, he and Aqua dismounted from their horses to cut a path through the foliage.

They soon burst into a clearing. A circle of stones surrounded an irregularly-shaped slab on rock on the ground. Two men were on the slab. One appeared to be some sort of robed cultist. The other was lying on the ground. The cultist was chanting in an unknown language and he held a black dagger high and was about to stab the second man.

“Shoot him!” Kazuma ordered as he drew his longsword and charged. They had one chance lest an innocent would be murdered. Aqua nocked an arrow and loosed it. He missed. The cultist stabbed his victim’s chest, killing him immediately.

“No!” Kazuma fought the cultist, who dodged his swordplay. Aqua now had the time to calm himself, aim and fire another arrow. His bow twanged and the arrow missed its quarry. Again.

Finally, Kazuma slashed down across the cultist’s chest, killing him.

“Uh, Master,” Aqua called out, pointing at the rock slab beneath them. The murdered man’s blood had flowed into channels carved into the stone, which formed an elaborate pattern.

Suddenly a swirling black portal appeared before them. From the pitch black hole in the air, something leapt out: it was a canine, as large as a mastiff, but with glowing red eyes. The air shimmered around it as if extremely hot. It opened its mouth and glowing embers flickered out from it as it emitted a deep unearthly growl.

They fought the hellhound for a bit, and ultimately won. 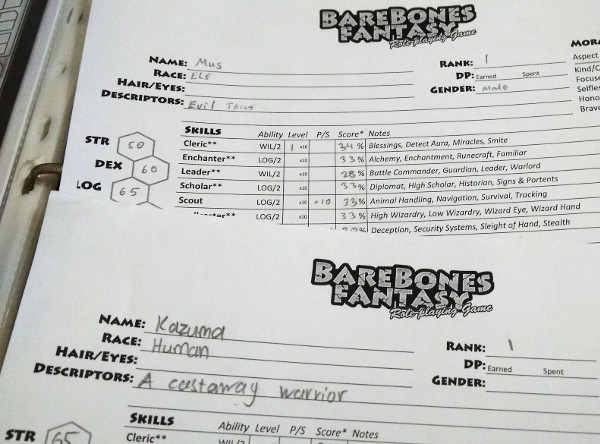 They never actually did name the horses and the hawk.

The Attack at the Camp

Some miles away, Mus had already set up camp and started dinner. It was no bother if his partner did not survive. There would be more food for him tonight.

That was when a portal yawned open before him, disgorging another hellhound. The dog attacked him causing him to draw his deadliest weapon: a dagger, causing him to regret not buying something bigger.

He slashed but was bitten several times when Aqua burst into the scene loosing his arrow which promptly missed the hellhound. This of course allowed the hellhound to bite him once again.

Then Kazuma swooped in out of the blue and skewered the hellhound and killing it.

Kazuma looked around at the camp which was on fire where the hellhound had breathed close to it.

Mus grinned his elvish grin and gestured to the dinner he had prepared, which looked like some sort of bird.

“Well,” Mus began to explain, but another portal began to iris out before them.

With weapons at ready, the trio looked at each other and then jumped into the portal.

The Realm of Fire

They found themselves in a hot, searing rocky land with dark clouds illuminated red and orange by lava from erupting volcanoes. The air tasted of ash.

Kazuma that there was an island of blue light a mile or so away on the red desert. A large rift in the ground filled with a river of lava separated the adventurers from the blue light.

Before they could proceed, a pack of hellhounds began to stalk and then attack them. The hellhounds caused a lot of injury before they were slain.

Aqua thought that this unplanned excursion into an extradimensional infernal realm was a stupid idea and told them he was retreating and returning back to their own world. Kazuma tried to persuade him to stay but he was not having any of that.

A hundred yards away, a pack of hellhounds ambushed Aqua from behind some boulders and mauled him to death. Mus and Kazuma balked and ran for the lava river.

The lava river was quite wide and the rift it was flowing in was deep. But Kazuma decided that the width would not be a hindrance to adventurers such as themselves. The human warrior steeled himself, ran and jumped. He missed and fell down the other side of the rift. He managed to grab on to a rocky outcropping, but he was too close to the searing heat of the lava.

He burned up, fell and died, in that order.

I think I will retroactively name the Minotaur “Bud”.

The Guardian of the Crystal

The only survivor, Mus decided to go for broke and jumped. He made it, and then hustled toward the blue light across the scorching land.

He huffed and he puffed until he reached his destination: a tall blue crystal the size of a full-grown redwood tree floating ten feet from a flat granite slab in a field of azure light. A 15-foot tall minotaur loomed into view, hefting an impossibly large iron club.

Mus noticed that every time the crystal flashed, different portals opened many dozen yards away.

“I see I have to stop this crystal!” Mus declared, pointing his dagger at the minotaur.

The minotaur flexed his inhuman muscles, furrowed his animal-like brows and snorted. He looked into Mus’s eyes, prepared for a battle, and then started to speak, “Listen, human. I have been waiting for crystal to mature for centuries. Centuries before that I have been in hundreds of battles. I need to tell you something. I am very, very tired. If you’d like I could pretend to fight you, and you could just walk up to the crystal to destroy it.”

Mus then blinked a couple of times, considered his options, and then yelled, “DIE, MINOTAUR!” and lunged at the gigantic creature with his little dagger. He was earnest in his struggle to kill the magical being.

The minotaur rolled his eyes and said, “Stupid adventurer. I’ve had enough of you and your world. All I wanted was to retire in some nice, pleasant dimension somewhere.” And then he smashed his club into Mus (depleting his Body Points to zero, btw) sending his broken corpse flying into the floating crystal.

Lightning bolts raged throughout the surface of the blue crystal, causing the minotaur to take several steps back. He sighed, “Here we go.”

All across the crimson land, portals were opening up by the dozens, hundreds. Thousands!

The world burned as it went about its way circling its sun.

Buka puasa at PFI2 on campus with my former studen

VAMPIRE THE REQUIEM: The Slaughterhouse Five and F