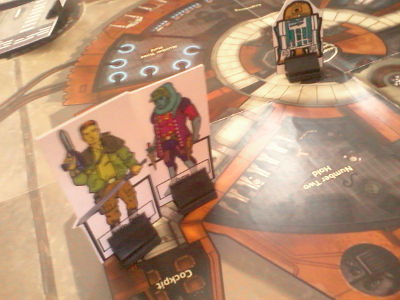 Upon the Lava Jaeger

The Star Wars RPG adventure continues from the previous session with Act 2 of The Long Arm of the Hutt free downloadable adventure (PDF download, low res version, 2.4MB). The story arc concludes with “Return to Mos Shuuta”, but the module has been extensively modified to account for a lot of changes that took place in the course of several sessions.

Irfan rolls the Force Dice and gets 3 Dark Side Points.

As Teemo the Hutt‘s agent Zasvid the Brizzit was being taken away from Archduke Poggle the Irredeemable‘s audience chamber in Kaliklak Hive on Geonosis, Hondo Pash the captain of Lava Jaeger, the Twi’lek Numa of the Nabat Militia and the astromech droid R2-8B8 considered their next move. For his transgressions against Teemo’s less-than-savoury enterprise on Ryloth and Geonosis, the Hutt planned to abduct Yuzy Pash, Hondo’s sister at Mos Espa on Tatooine.

Because of his badly injured arm (Critical injury: Crippled Arm) Hondo spent the night in a bacta tank courtesy of Archduke Poggle. The next morning, after Hondo was decanted from the tank, Numa and he geared up for the mission to Tatooine.

Archduke Poggle gave permission for R2-8B8 to join their company and bade him farewell. Lava Jaeger took off and Hondo made a success jump to Tatooine. (Astrogation 1 success)

En route, Artoo asked Hondo for a game of dejarik. (Intellect vs. Intellect, Hondo gets 1 failure and 1 advantage) Artoo enjoyed himself, wiping the dejarik board with Hondo. But before Artoo won, the YT-1300 light freighter reverted from hyperspace off Tatooine. Numa called, “Get in here. We’ve arrived!” Hondo rushed to cockpit saying, “Sorry! Duty calls.” Artoo beeped, Hey! Come back here and lose!

“Yuzy is at Baron Deathsplitter’s Orphanage For Little Girls in the city of Mos Espa. Teemo is probably in his palace in the smaller settlement of Mos Shuuta. We get down there and get Yuzy before Teemo arrives.”

They landed at Landing Bay 32 in Mos Espa. As Numa dealt with the port authority droid, Artoo and Hondo resumed their dejarik game. Just before the end, the tide turned and Hondo won. (An sudden Intellect Success!) Hondo fled the dejarik table as Artoo chirped, HEY! NO FAIR! at him.

Hondo wished to hunt for better weapons, but only found an Ortolan named Uncle Kwombat who only sold run of the mill blasters and vibroknives. (Streetwise roll Failure.) A large explosion rocked the city. Smoke billowed from the orphanage. They dashed toward the building, spotting a Bantha II cargo skiff flying off from the column of smoke.

Little girls were staggering out of the orphanage in shock. Baron Deathsplitter, a manumitted LOM protocol droid wearing a cape, was guiding the last of the children out. There was one badly wounded little girl with a bleeding midsection. Hondo and Numa rushed to perform first aid on her admirably.

The Baron thanked them for their assistance. Hondo identified himself as Yuzy’s brother. The Baron informed them that Gamorreans had attacked the orphanage during classes, grabbed Yuzy and escaped on a cargo skiff from a second story window.

Another girl came forward, saying she found a palm holoprojector. The droid baron activated it and a ghostly Teemo coalesced. “I’m sure you’re not far behind, Hondo Pash. You have interfered with my business for the last time. You will pay for your interference. Your sister will be in the gladiator cells in my palace at Mos Shuuta. Feel free to rescue her. Either you will die or she will. We will be waiting.”

Hondo told Numa that when he escaped the city before, he had discovered a secret entrance: a concealed cave at the base of the mesa. They headed for Mos Shuuta and set down two hundred kilcks from it to wait for second sunset. Under the concealment of darkness, they flew low toward the settlement which was set atop a series of tall mesas rising up from the flat desert floor.

Artoo waited in the ship while Hondo and Numa searched and found the secret door. The RA-7 who thought Hondo was his former master was still there and greeted them. He produced a knapsack and told Hondo that he had left it there the last time he was there. Hondo accepted it. There were two thermal detonators within it. Numa said, “I like this droid’s real master,” slinging the knapsack over her shoulder. Then they climbed the endless spiral staircase up to the city. (Both rolled Brawn success so no Strain was lost.)

They emerged in an abandoned shop, its shelves thick with dust. Hondo discovered that their path toward Teemo’s Palace would take them past Vorn’s Junk Shop and he noticed R5-K2 the green astromech droid that helped him before sleeping outside the junk shop. Rousing him, Hondo convinced the droid to help them rescue Yuzy. (Successful roll.) Arfive beeped in droidspeak, Sure I’ll help you. Vorn is an ass. Let’s go on an adventure!

There were a pair of Gamorreans bearing cudgels standing guard at the palace entrance. Clearly Teemo was expecting Hondo. They snuck past the Gamorreans and skirted the perimeter of the palace. They inched on a ledge facing a hundred-metre drop at the edge of the mesa until they came to an empty landing pad. It was connected by a gangway to a hangar bay within the palace .

The hangar bay held a pair of RGC-16 speeders. One had no engines attached and was being worked on by a human and a Duros. There was also a Bantha II cargo skiff parked between the infiltrators and the technicians. It might be the one used to kidnap Yuzy. A Trianii was manning a small office at the far corner of the bay. A burly Gamorrean stood guard at the door that led into the palace.

Hondo devised a plan, which failed when he kicked some loose tools on the floor alerting the outlaw techs (failing a Stealth roll). R5 rolled in to save the day, beeping that he was sent by the palace administration to check on the cargo skiff. The human was not convinced (a failed Deceit roll) and forced the droid to wait at the hangar bay office while he went to talk to administration.

With the comlink, Hondo told Arfive to take advantage of being near a computer console. He stealthily plugged into a port and (with not just Success, but Triumph in Computers) activated a priority biohazard alert in the bay. Everyone panicked and fled in fear! The human yelled to the Trianii as they scampered off, “Leave the droid. He doesn’t need to breathe!”

Numa stowed her Model 434 heavy blaster pistol and joined the others before creeping out of the hangar bay into the empty palace’s corridor. Arfive told Hondo, I’ve seen the floor plans in the computer. The cells are in this direction, and he turned left. Numa said, “We have to go right.” Arfive chirped wildly, But that’s not where prisoners are kept. We have to go left.

Numa said, “Hondo. I’ve saved your life and you have saved mine. We have been through a lot since Nabat. Please trust me this one time.”

Hondo turned to Arfive and told the droid, “We follow Numa.”

The corridor curved and deposited them in a dark storage room. Numa switched on the lights and revealed that it was a trophy room. Teemo had been collecting stormtrooper and clone trooper helmets and displaying them in transparisteel cases. Numa went to a Clone Wars era ARF trooper helmet. It had desert camo livery, but what surprised Hondo was a cartoon drawing of the head of a blue-skinned Twi’lek girl. Numa explained, “This belonged to a warrior. And a good friend. Teemo has no right to keep it.”

Hondo nodded, and she put the helmet into her shoulder-slung knapsack. 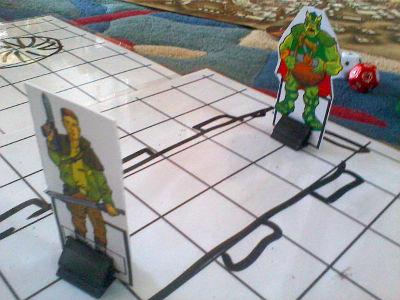 Arfive led them to the door that led to the gladiator cells without bumping into anyone else. The red-lighted corridor was empty save a single Gamorrean with a cudgel. There were three cell doors on either side of the hallway and an equipment cabinet on the far wall. Hondo said, “Here’s the plan!” And then he rushed in swinging his vibrosword. Caught unprepared, the sword struck the guard whose thick flesh absorbed the blow and only slighly injuring his arm. A cudgel counterstrike cause Hondo to fly back with a bad bruise.

“This is taking too long,” said Numa who then slipped into the hallway with Arfive who promptly shut the blast doors. A single shot felled the guard.

“Quick! Check the cells!” barked Hondo, sheathing his vibrosword. They opened the cell doors on the left side of the hallway. All were empty except for the last one. In the dark cell, illuminated by red lights, there was an ominously robed figure wrapped in strips of cloth and wore a beat-up face-concealing helmet with a t-shaped visor. The figure was chained and hanging from the wall. He looked up and growled with a electronically enhanced voice, “Tho, are you going to thtand around, or are you going to releathe me?”

Numa asked, “Can we trust him?” Hondo looked at Numa and muttered, “I’ll trust him.” He hit a button on the wall and the chains released the figure. He walked out to the equipment cabinet, opened it and began taking out weaponry: a BlasTech EE-3, a vibroblade and a large-barrelled hand cannon of unknown make. After gearing up, he turned to Hondo and told him, “You have my gratitude. My name ith Giin Lawquane, a thimple hired gun.”

After Hondo introduced his party and explained his mission, they unlocked more cells to discover Yuzy resting in one of them. She was glad to see Hondo. “You took your time. What were you doing? Swimming in a bacta tank?”

Hondo, Yuzy, Numa, Arfive and Giin crept out of the cells back toward the hangar bay. However, there was a complication. Teemo the Hutt himself and four guards had come to investigate the biohazard alert. He was perched on the skiff, flanked by two armed Quarrens and two armed Rodians. The Hutt gangster spotted Hondo and bellowed, “There you are, just as I have expected. I see you’ve brought friends. Now prepare to die.” 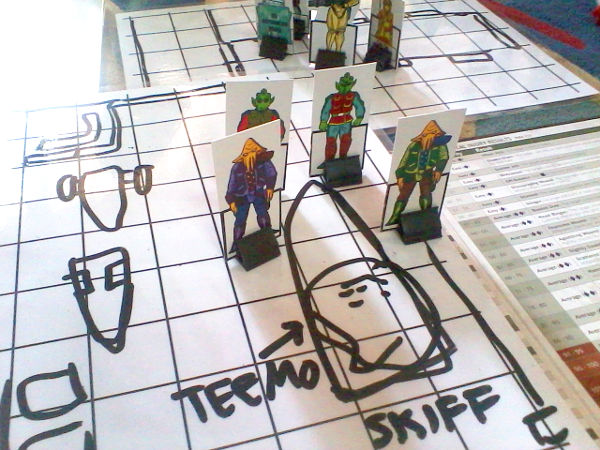 When given, one of the explosives disappeared into the folds of Giin’s robes. The other was flung out and exploded right beside the skiff. The baradium blast pulverised all four guards immediately. However, the Hutt despite being fairly wounded by the explosion, still survived. He remotely activated an Intruder Alert alarm. Hondo ran into the hangar bay, drew his DL-17 blaster and shot the Hutt dead. (He only had 3 HP left.) He would not be able to threaten Yuzy again.

Arfive tweeted everyone to get aboard the RGC-16 speeders and they all flew away as latecomer guards stormed the devastated hangar bay in a futile effort to stop them. 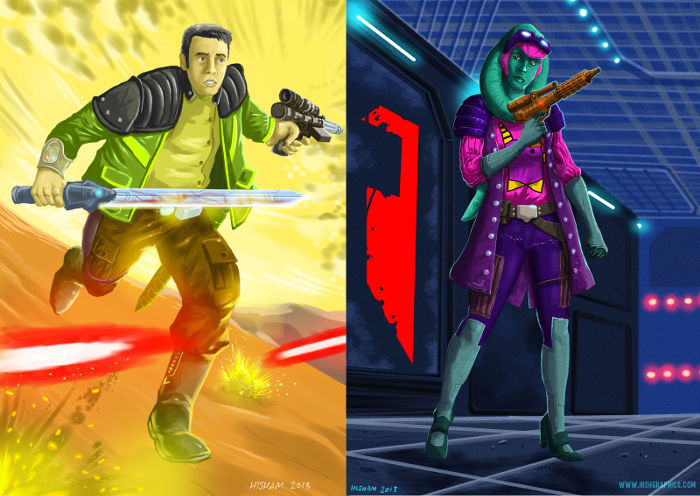 Soon the five of them were at the entry ramp of the Lava Jaeger on the desert floor. The Mos Shuuta mesa loomed like a giant shadow over them. Giin agreed to be the ship’s security officer in return for a place to stay. Hondo introduced Artoo to Arfive. They were both pleased to meet each other.

However, Numa said her goodbye to Hondo. She said, “I’m sorry to have deceived you. But I got what I came here for. Now I have to return to Nabat. I have responsibilities there.”

Hondo said, “I hope we meet again.” Alone, the Twi’lek flew the stolen speeder toward Mos Espa to search for a ship back to Ryloth.

They raised ship, and the Lava Jaeger soared into space looking for fortune and further adventures.