So out of watching four episodes of Heroes in a single night , a game between Ain and Emma was born. 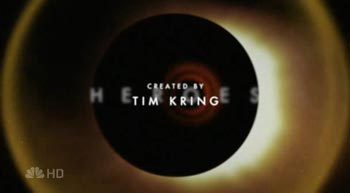 The first to yell out “TIM KRING!” whenever his name came out onscreen wins. That’s eight times in three hours. Once during the short intro and the other when the Executive Producer name appears during the story after the intro… each episode.

Not as easy as you might think. You get caught up in the teaser, someone’s bound to forget to yell immediately when the name appears.