Last night, Doug came over to run a game for Irfan and I before he had to move, and it would be more difficult to meet up at nights regularly.

We played Golden Sky Stories for the first time. Set in rural Japanese township (not unlike a films like Tonari No Totoro) Golden Sky Stories is a tabletop roleplaying game where players take the role of magical animals called henge who are able to change into human form.

It’s a great game to be played with children because there’s not a single iota of violence, or situations that put the player characters in dire peril. It’s all to do with making friends with other henge or little children in a small township in a rural Japanese countryside.

In fact, if you can grasp the situations in Tonari no Totoro where characters experience wonder and express their likes and dislike in childlike ways. The characters are never in any physical danger and there are no villains. 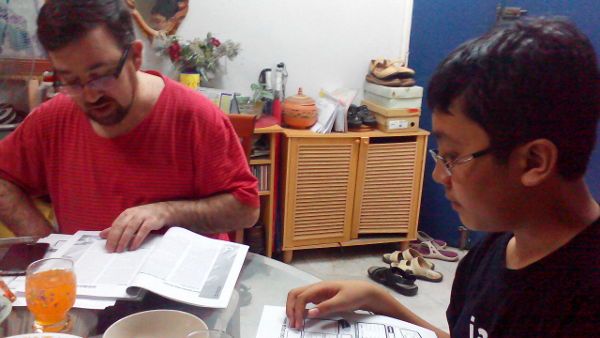 Doug and Irfan and shoes!

Task resolution is not achieved by rolling dice, but with points that you use to activate your powers, or increase your characteristics to beat a target number or your opponent’s characteristics. It’s like GUMSHOE’s resource management system without rolling any d6s.

Whatever you need to do can be defined by four characteristics: Henge, Animal, Adult and Child. You also have points in Dreams, Wonder, and Feelings. Dreams allow you to create and strengthen connections with other characters. You also spend Dreams to transform into your human form or partial human form. Wonder allows you to activate your magical powers. Feelings are the points you need to increase your characteristics to beat high target numbers.

We generated characters quickly. Irfan was Kamineko the grey sleepy cat who lazes all over the town of Hitotsuna. I played Kuro, the black rabbit who lives in the town school, who thinks he’s a dog.

Kuro was digging up (or trying to dig up bones) in a field outside of town when he came across Kamineko who was trying to sleep on top of an old abandoned shrine. Kuro invited Kamineko to help him dig for bones, but the cat henge refused to help the manic, identity-challenged rabbit henge.

Suddenly Kuro discovered that there was another henge in the shrine. It was a fox who identified herself as Suzune. The shrine was hers!

After a conversation that led to Suzune to bash her head on the side of her shrine because of Kuro’s insistance that he was a dog, it began to get dark. Kuro and Kamineko thought it was time to get back home and transformed into their half-human forms (by spending Dreams.) Then it started to rain!

Kuro transformed back into his rabbit form and hid in the shrine. But Suzune convinced them all to huddle together under a big tree. 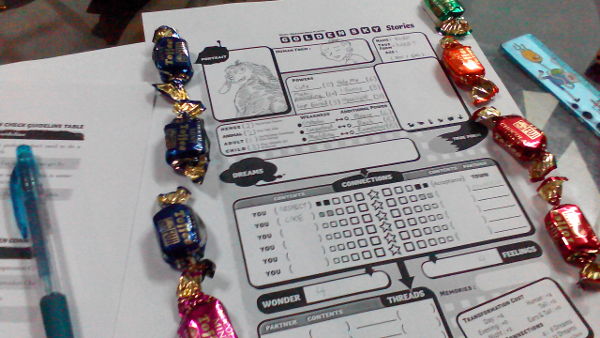 Kuro noticed something strange. There were no clouds in the sky and the full moon was bright. Kuro used her Please power to act cute, rub against Suzune’s legs to get her to submit to his cuteness. Suzune began to weep. She said she was lonely and no one had come to her shrine for many, many years. Kuro promise that he and Kamineko would come every day to visit her so she wont be lonely.

Immediately the rain stopped. Suzune was happy, bade her new friends farewell, then waited for the next time Kamineko and Kuro would visit. 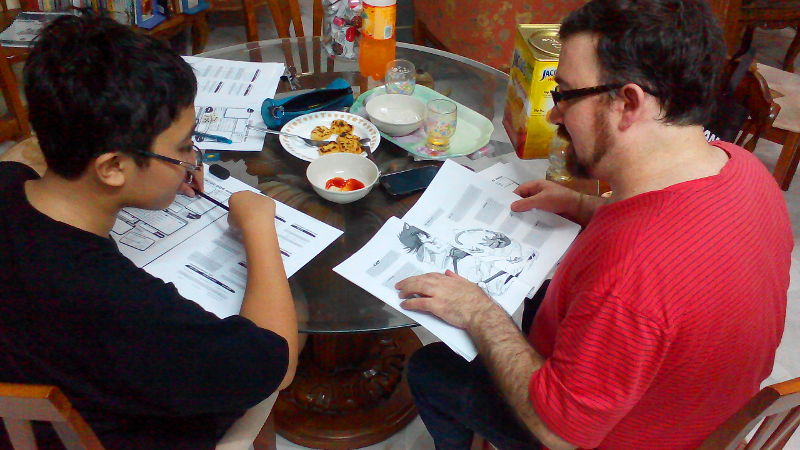 Henge of the Dinner Table

After that, we created new Connections and Irfan spent Dreams to strengthen the non-player character Suzune’s connection with him.

Irfan had some trouble adapting to the whimsical and childlike aspects of the game, probably because he was more used to firing blasters in Star Wars and using an axe in BareBones Fantasy, but in later talks he appeared to be able to grasp the concepts better. Perhaps he would be able to game better should we play it again.

Many thanks to Doug for running Golden Sky Stories for us!