Earlier this week, Irfan gamemastered his first RPG session with his friend at his friend’s house.

He had took my printed out copy of BareBones Fantasy, created his own pregenerated characters (asking me a few questions along the way), drew a simple terrain map and filled it with opponents.

His friend Fikree, I was told, named his pregenned human spellcaster William Jester. Irfan’s own GMPC is a dwarf named Hector Zorin, a warrior with a greataxe, a battleaxe, and a warhammer.

Because I was not present to witness the game being played, I interviewed Irfan for details of what went down in the session.

William and Hector were scouting the woods near the town where they lived because travellers had been disappearing there.

Near a rocky hill surrounded by thick trees they spotted a cave entrance that was guarded by a lizardman. 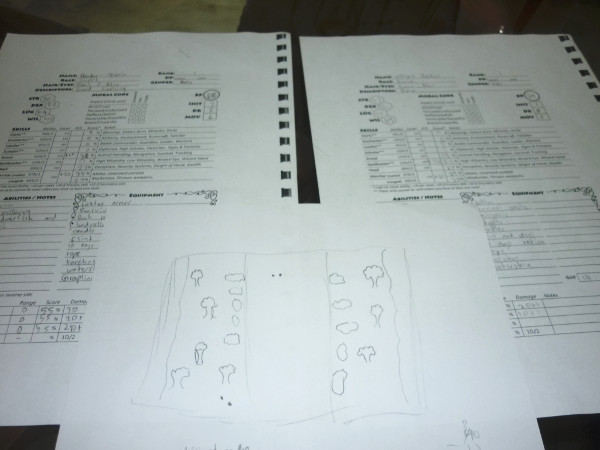 Photo of the artefacts used in the event!

The lizardman lunged once again, but his spear failed to stab Hector once more. Hector’s greataxe sliced the lizardman in two (with 10 Damage) ending the battle.

They decided to explore the cave passage and discovered a crossroad that continued forward and also branched left and right. The passage ahead had a large cache of gold, which was freshly mined, apparently by the lizardmen. There were no lizardmen seen except for two guards waiting at the left and right passages.

Hector and William attempted to sneak past them. (They rolled Scout skill for stealth, but they both failed.) Lizardmen noticed their approach, readied their spears and attacked. (Initiative order: Hector, William, then the two lizardmen.)

Hector had his battleaxe ready but failed to strike a blow on the attacking lizardman. William’s fireball blasted second lizardman into fiery bits (with 12 damage, 2 more than needed to kill him).

The first lizardman then succeeded in piercing Hector’s body (inflicting 11 Damage, leaving 18 BP left; Hector was a tank – I saw Irfan roll Strength 60, then augmented it by 10 because of his dwarf characteristics). Hector retaliated with his greataxe, but missed. William’s fireball attack also missed!

The lizardman thought he would finally be able to kill Hector, but fortunately the dwarf deftly dodged the spear thrust. Then Hector used his warhammer to strike the lizardman’s head and slaying him (for 18 damage).

William Jester said, “Can we claim the gold now?”

I asked Irfan what his plans were for the game. He said, after the lizardmen disappeared, travellers were still going missing, so William and Hector will have to investigate further. He hopes to continue the adventure in the future.

I was pleasantly surprised that he was able manage a game session with a solo player. I remember he was very reluctant when I asked him once. Obviously, he needs to work on his worldbuilding skills so I’ll be trying to teach him how to do that. (Why are the lizardmen there? Are they really evil? Why hasn’t anyone else discovered the cave and the gold within?)