It was back in early October after Raya Haji vacation when I began to fall ill with fever, coughs and sniffles. I blew my nose at work and sprayed the toilet at the office with a bowl full of blood. That never happened before. I thought that such amount of blood should not be outside of any human body.

The pain was strong and constant. It speared up into the right eye and down into the right side of the mouth. The smell of blood from my nose and mouth was incessant. (My review of Andy Weir’s novel The Martian might have been written when I was right in the middle of it as evident from the last paragraph.)

One quick visit to a clinic near home, and a doctor diagnosed just a nosebleed perhaps because of my vigorous nose blowing over the days. A second visit later in the week, and I was referred to the ENT Specialist Clinic at Hospital Tuanku Fauziah.

Endoscopy turned up one nasal polyps. A scheduled CT scan a week later discovered a second polyps. This was escalation. But by this time, I had expectorated a mass of blood and mucus (see end of entry) which had suddenly neutralised whatever that triggered the pain. A steroid spray was bestowed unto me to keep the polyps from flaring up again.

The removal of the polyps one way or another was then scheduled for early March.

It was now early March, and after 43 years of avoiding it, I finally had to be hospitalised for a major surgery.

I was to undergo a functional endoscopic sinus surgery, followed by a septoplasty – apparently I have a deviated septum and no one noticed over the years. 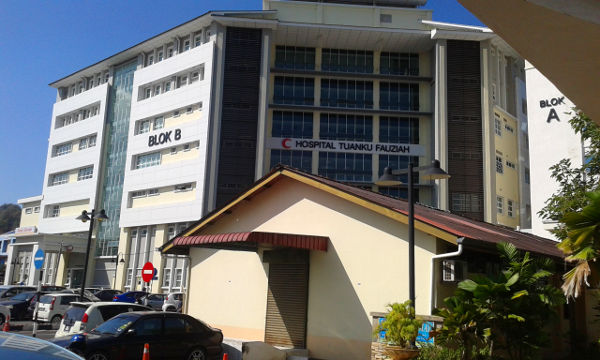 Atok and Opah visited from Sitiawan to ensure Irfan would be okay at home and ready for school while Ain took care of me overnight in the hospital ward. So on the first day, I registered and I was assigned to a bed. It was a nice bed, but it had no inlaid diagnostic scanners, no automatic expert systems to inject me the right drugs at the right time, no wireless connection so I could access and read whatever medical data it has on me.

Apparently I was expected to just lie on the bed. 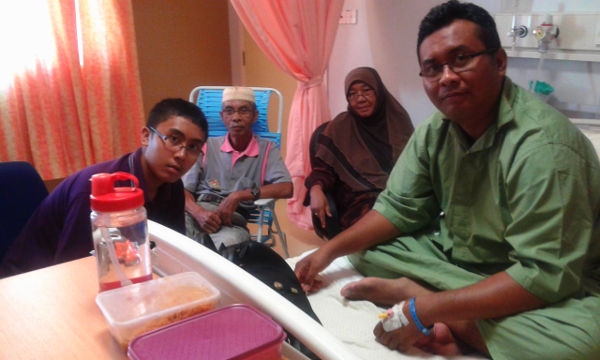 I had neighbours in nearby beds and later than afternoon Irfan visited me after school along with Ain, Opah and Atok. In the meantime, I spent my time reading the last half of Abbadon’s Gate. That evening, after Atok, Opah and Irfan had returned home, it was just Ain and I. 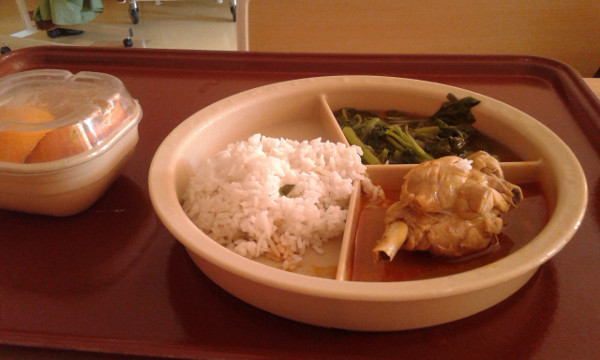 Hospital food here was not too bad. I would say I found it somewhat tasty. Who said hospital food was unpalatable? I hope that they had minimised exposure to the Phoebe protomolecules in the food, or my next x-ray scan will be quite mutagenically interesting. 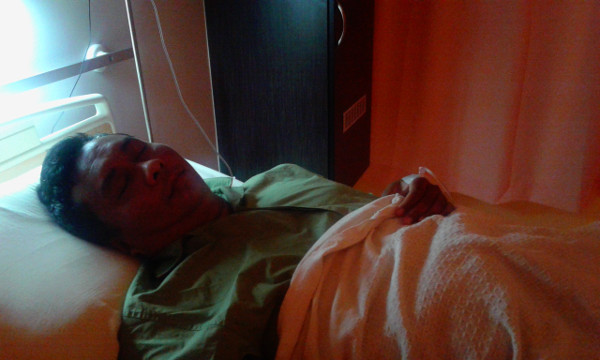 Ain took a photo of me asleep late at night when she woke up while I was on the intravenous drip, awaiting the surgery the next morning. The nurse kept waking us up to check my blood pressure and adjust the crash webbing, but I realised that there was no crash webbing. A midpoint flip-and-burn would be catastrophic for me. 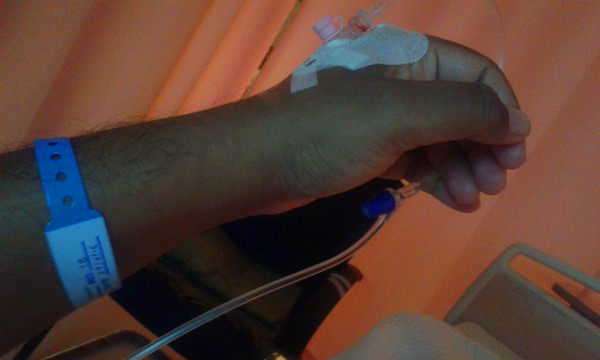 This is my first experience with a cannula

The needle in the back of my hand stung, by the way. I wondered if they stuck it in wrong. I wondered if the juice pumped into my body is enough to keep me conscious, my circulatory system from collapsing and prevent a stroke during a high-g burn from here to Oberon.

I wondered if I have been reading James S.A. Corey too much. 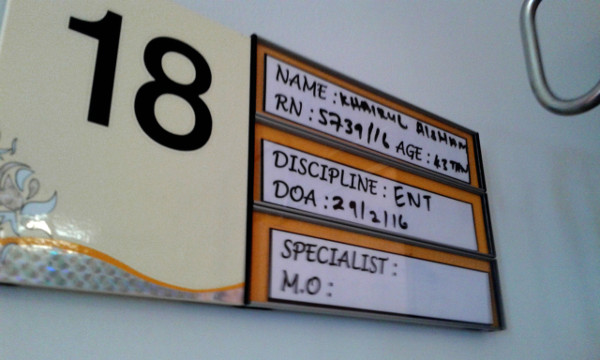 They even wrote my name and everything on the wall near by bed. I was so pleased. Just in case, you know, someone changed my name without me knowing and erased my memory.

During the morning of the surgery, they wheeled me off and prepped me for surgery. I was on my back looking at the ceiling lights pass by just like in the movies. However upon testing, my blood pressure was spiking at the operating theatre.

Strange. I did not feel anxiety about the operation.They sedated me just in case it was the case of the jitters, but even under sedation the high blood pressure reading remained. And remained so during a period of observation. Cold, cold and back-of-hand-stinging observation.

So the surgery was off and they carted me back to the ward along with my still-deviated septum, which is apparently different from a deviated sputum, but that is besides the point.

I was referred to Medical, and a new series of doctors came to check up on me to ensure I had no medical complications like high blood pressure and symptoms of diabetes. They monitored me for over 24 hours. Apparently I had none. All my readings were nominal. I tried with confirming the bed, but I forgot it was not a normal smartbed.

Then suddenly, POW! I was fully in control of my senses and fully cognizant of my surroundings. But for some reason I was still unable to pull up data overlays in my retinal HUD. Sigh. 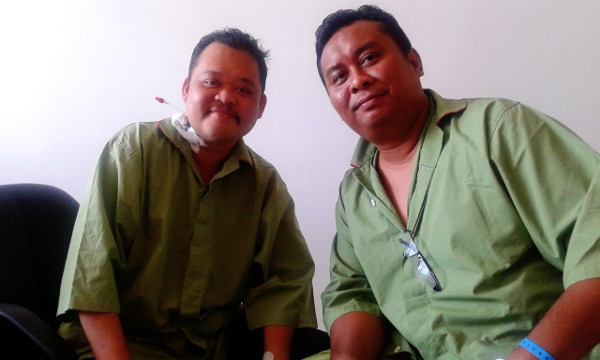 I made friends with everyone in the ward. Including this English teacher named Shafril who still needed another 15 more days of antibiotics. He was a fun guy. I hope I meet him again. We shared comm access between our hand terminals. 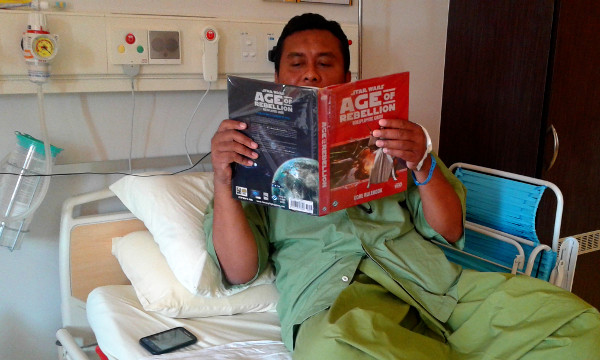 It was also Read an RPG Book In Public Week, so I thought I’d read something other than Cibola’s Burn in the ward. It felt weird how different the Epstein drive was in this roleplaying game rules. 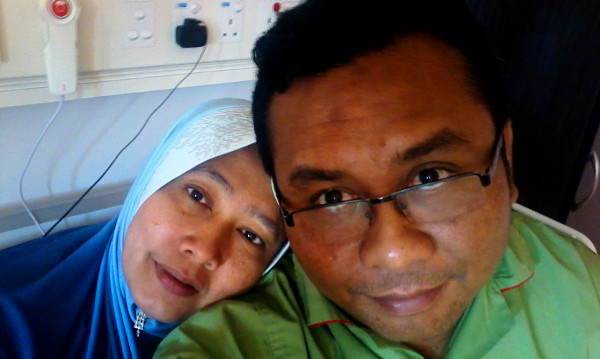 It was then time to leave. I would miss my talking wireless biobed. I took some photos with Ain before Atok and Irfan came to pick us up. We said goodbye to the good English teacher before we left. I met with the ENT specialists again who rescheduled me for another back-of-hand-stinging surgery in August.

In any case, I am going to miss my smart biobed with the crash webbing.

Back in October, I failed to take any photographic evidence of my illness except for that one last expectoration which sent the following putrescent mass flying to the bathroom floor of the old house, like a shoggoth’s last hurrah. 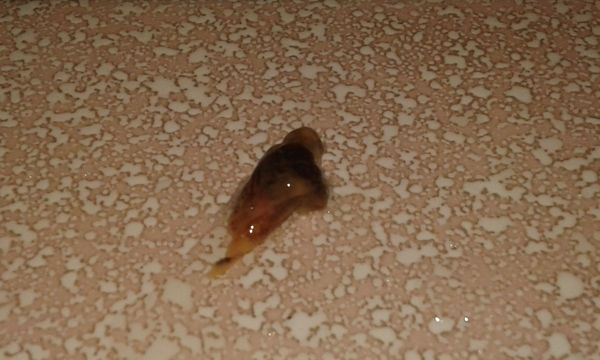 It was incredibly foul-smelling and had an unpleasant texture of pus and blood. But once this protomolecule processing node left my nasal cavity, the pain went away. Whatever this was, I hope it would not return before August.