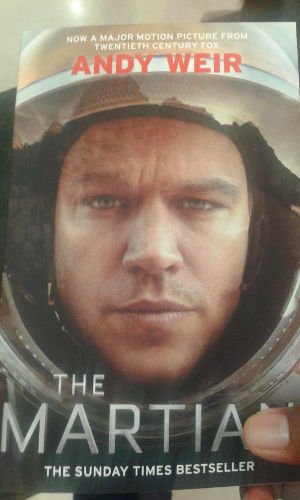 The Martian is a book written by Andy Weir

It is also my graduation present from Ain, in lieu of flowers. A book, I thought, would not wilt after a couple of days. I spent the same number of days for flowers to wilt reading the whole book. It was very engaging.

Also, the book did not wilt. Yay.

The premise is simple, astronaut Mark Watney, a botanist – who looks like the guy who Tom Hanks had to rescue back in World War 2 – gets left behind on Mars in a freak accident while his fellow astronauts had to leave immediately because of a dust storm. What should have been a fatalistic “that’s it no one knows I’m still alive and doesn’t matter not enough food I’m dead anyway good bye everyone” 3- day short story becomes a full length novel for survival that extends for months and years as Watney uses his engineering and botanical skills to keep himself alive using material at hand, like spanners, nuts, bolts, potatoes, hydrogen gas, an RTG buried in the ground some kilometres away and the Mars Pathfinder probe a couple of hundred kilometres away.

Mark Watney is an interesting character. He is a man of the internet. Although he speaks English, he speaks it in the manner of a man who probably knows what 4chan is and are aware of ALL THE MEMES. This is a realistic build of an internet-wired 21st century character. I don’t believe there has ever been such a character. No, not even Keanu Reeves in that mind-blowing, sensational cyberpunk movie that everyone knows him for… Johnny Mnemonic.

NASA is interesting. As a red tape bound organisation, there are quite the many problem solvers that put their career on the line to save Mark Watney. And more importantly, they are a multi-ethnic bunch of heroes that attempt to reflect the reality of a multi-ethnic nation and planet. I’m sure they’ll find someone race-appropriate to play someone named “Kapoor” and “Park” in the movie.

Wait, the movie’s out?

Anyway. Watney’s life on Mars is like my life in Kuala Lumpur: One thing after another, where “thing” is usually some form of shit hitting some fan somewhere. He weathers all the problems well though, if you can count being blown up by a hydrogen explosion “well”. He survives, probably because he looks like that guy from Elysium, and I’m not talking about Wikus.

Anyway. Anyway… this pain up my nasal cavity is bad and it’s pushing into by jaw and eyeballs. And I don’t think the meds are helping. So go read the book to see how Watney kills the Pathfinder probe. What did the probe ever do to you, huh? Damned amperage. How do they work?