Peter Schweighofer, who was a writer and editor at West End Games back in the ’90s and the editor-in-chief of their Star Wars Adventure Journal periodical, sent a couple of rare gaming memorabilia to me which I received earlier this month.

The first was the Mos Eisley Shoot-Out miniature game. 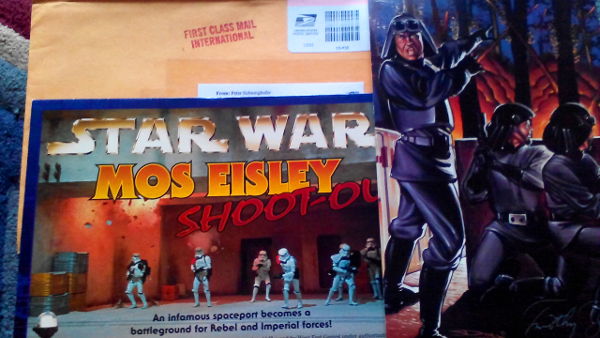 The game is a simple boardgame that came with a paper foldout grid map of the streets of Mos Eisley and cutout miniatures of characters you could play in the environment. The rules were a simplified version of West End Games’ Star Wars The Roleplaying Game combat rules. It was also marketing material that cleverly generates excitement for the RPG itself. 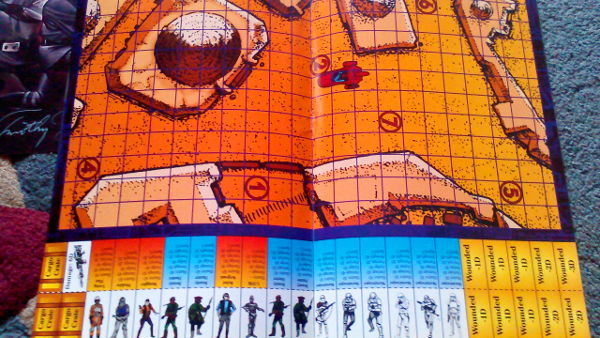 I don’t think I’ll be clipping out the paper figures out of the document. And not just because I have other paper minis that I could use for the purpose. I’m uncertain, but the map looks to be a segment of Jennell Jaquays’ amazing full-colour foldout map that came with the Tatooine Manhunt module, which I once ran early during the Strikeforce Enteague Star Wars D6 campaign. 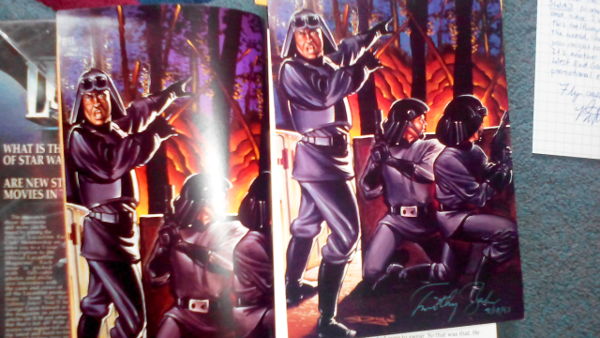 Finally, Peter also included a promo card of the splash page artwork illustrated by Doug Shuler that accompanied the short story Mist Encounter written by Timothy Zahn in Star Wars Adventure Journal #6. The photograph above places the card alongside its printed page counterpart in the book!

Peter is currently a freelance writer who produces excellent gaming sourcebooks like Pulp Egypt for the Any-System Key. Thanks for letting me have a piece of Star Wars RPG history, Peter!