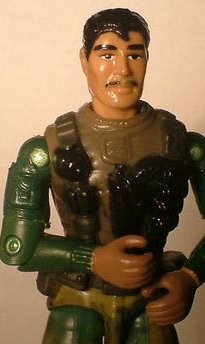 I’d like to add to Monsoon’s background: He’s carried a lot of emotional baggage on his shoulders, ever since May 1999 where he faked sick leave to catch the première of Star Wars Episode 1 The Phantom Menace in the theatres. During the screening, his squad was called for a simple milk run, a reconnaissance mission to the jungles of Papua New Guinea to investigate the reports of a new Cobra bioweapons lab. There was an ambush and everyone was killed in action, except Monsoon who was watching Star Wars. Now a member of the Last Chance Squad (broken link) of the G.I. Joes, Monsoon has a strangely adverse psychological reaction whenever Star Wars is mentioned.

Click on the link (broken link) to check out Monsoon at Joe Dios. On the figure itself I only have one thing to comment: “Damn! I am hella thin.”