It was show and tell time at school, so little Ayumu Kasuga brought her pet that she found washed ashore along Osaka bay. She could not really recall how she came to have it, or how she brought it home… or even how she got it to school for show and tell, but there it was like a shadow upon a shadow deep from a lingering nightmare. When it was her turn she began to speak. She was somewhat aware that she spoke in a tongue both beautiful and ugly to hear but she thought nothing of it. Some of the sounds she made did not seem possible to have vocalised by a human but she also thought nothing of this.

But her voice carried, and everyone who heard it came – even ones who were too far away to listen. Soon her class was filled with students from other classes, other teachers, random folk that had decided to visit the school for one reason or another. Even the headmaster arrived as she began her closing speech. Her pet stirred lazily as she finished. A standing ovation roared from the classroom, growing louder.

The longer they clapped elatedly, the more blood flowed from their ears, their nostrils, their eyes. Her pet reached out with its arms and embraced everybody as it turned dark outside at noon. A single thunderclap crashed, preceded by a sickly green lightning. Everyone raised their head and sang as their mouths bubbled with blood!

The next day, Ayumu Kasuga was transferred to Tokyo for no reason at all where she lived happily ever after.

Happy new year and such! 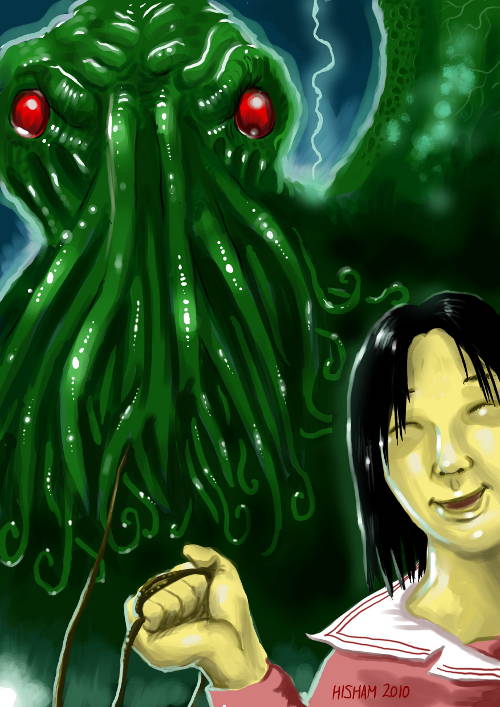