I would very much like to say that these are some of the oldest illustrations I have drawn to be used for Star Wars RPG (to be precise the Strikeforce Enteague campaign), but they are not. These were drawn in the mid-90s when I was running the “second season” of the campaign, so to speak, after I returned from my studies.

Regarding these illustrations: it occurred to me that I could fold a single A4 piece of paper into 8 sections and draw characters, scenes and computer displays that I have planned to appear in the session. Note that not all of these were ultimately used in a session.

Click on each thumbnail to view the full image. 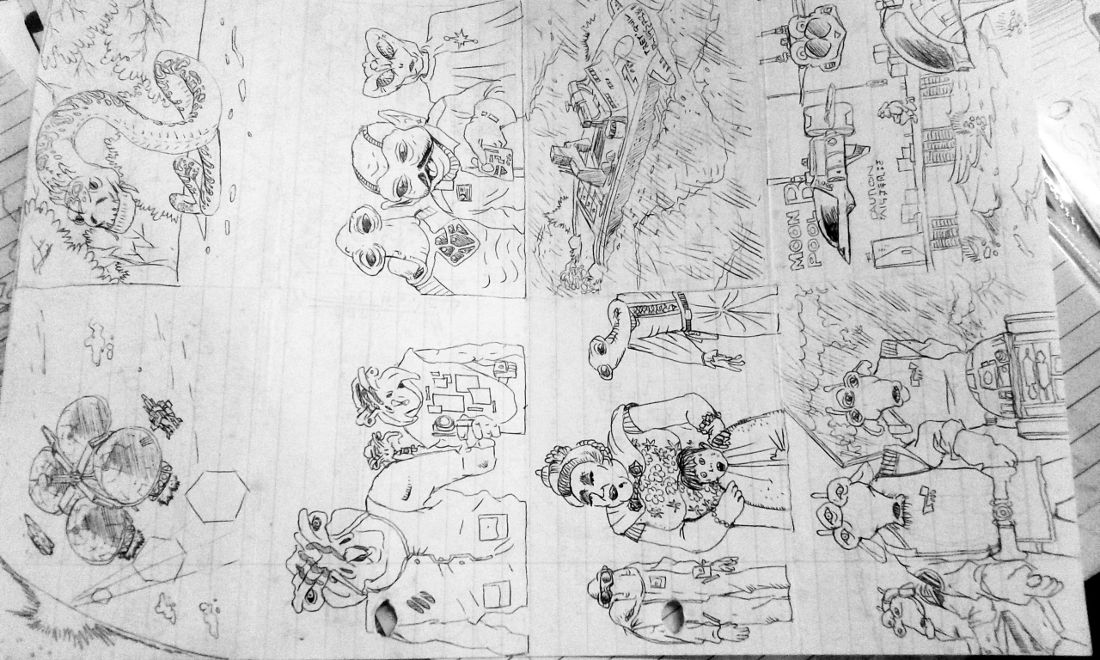 This was the first session I ran upon coming home. I was lounging around at home when a bunch of youngsters – still in lower secondary school – accosted me at my door asking me to run the Star Wars RPG for them.

Ithorian and Sullustan scouts tell the player characters – a New Republic commando team – an Imperial Star Galleon in New Republic space. The Star Galleon lands at Elzethu Island in the Kinyen System. The group has to capture the crew, but the Imperial fugitives have taken an entire school hostage. Unbeknownst to the group, Captain Braxen possesses the powerful Staff of Qell Barakhbur.

I put the brakes on this group and storyline because the players were playing chaotic evil for some reason (Well, the reason was that they were young and have been playing D&D too long) and they held up a New Republic armory on Coruscant before the mission, then returned to Coruscant like a hundred New Republic Security Force would not be waiting for them to throw them into jail. 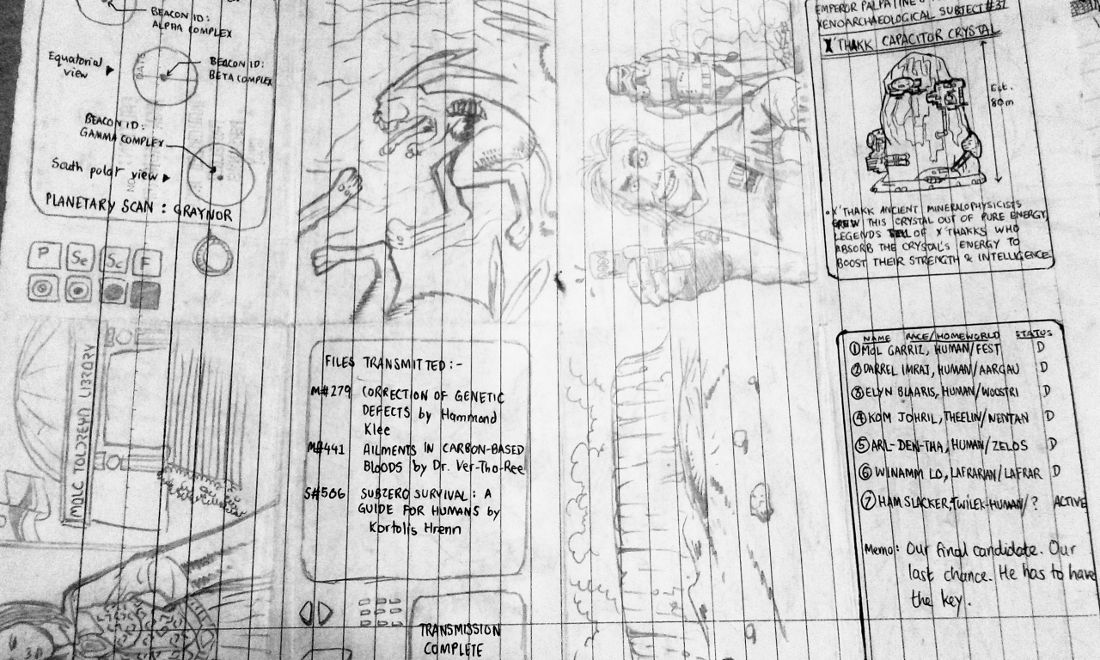 The Hunt for Ham Slacker

An Imperial Admiral was out for blood. Literally, a Ham Slacker’s blood was required to activate Old Dead Palpatine’s old exotic tech cache, something known as a X’thakk Capacitor Crystal. They are greeted by the Admiral graciously at his base on the prison planet Graynor. 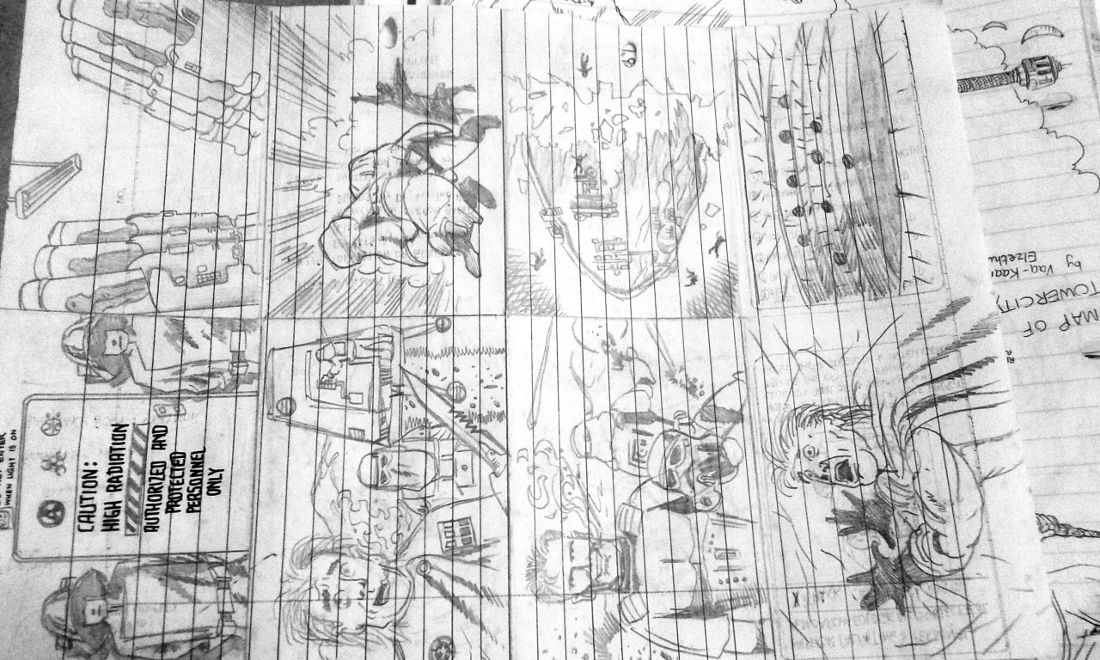 The Hunt for Ham Slacker

Of course it’s a trap. The team discovers a number of exsanguinated corpses and a list with Ham’s name the only one not stricken. They have to rescue Ham on the frozen world of Kendell back in the Enteague Sector. The Admiral succeeds in raising the colossal crystal from beneath the ice. But there is a snag. The crystal only work on the extinct X’thakks. 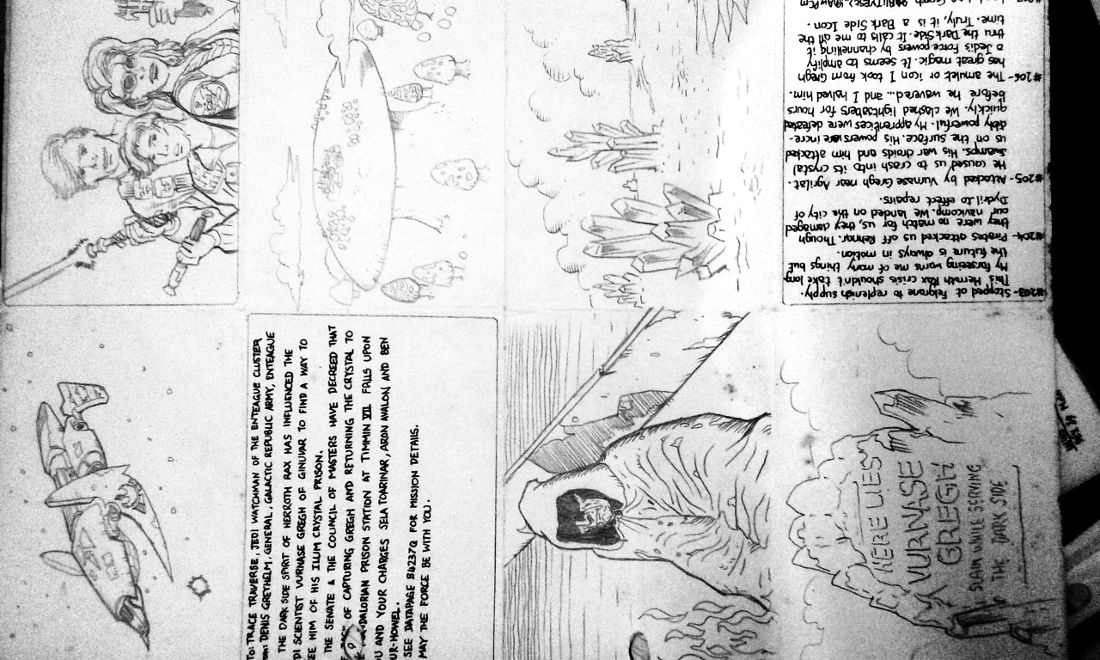 The first generation of player characters return to discover that their grandparents had fought Vurnase Gregh, a marauding Dark Side disciple. 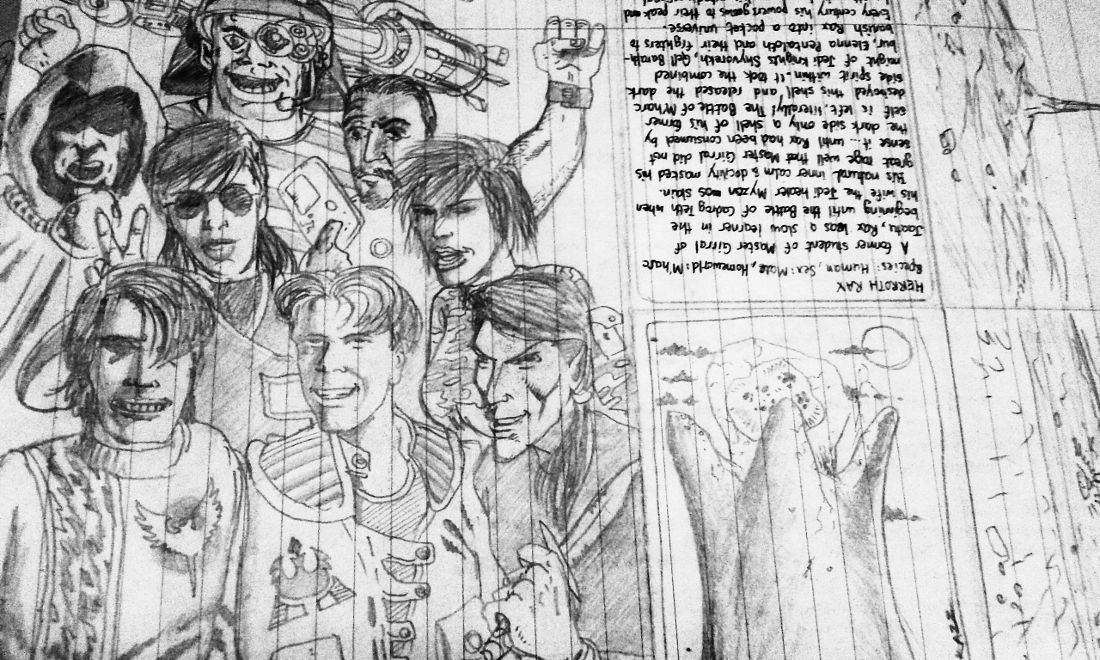 It turns out that Vurnase Gregh was about to unleash the powerful Dark Side spirit Herroth Rax and their grandparents died to stop him. Meanwhile, Herroth Rax was about to be released from his pocket universe that he was banished to and the team now had to find a way into that universe to kill him while he was still depowered. 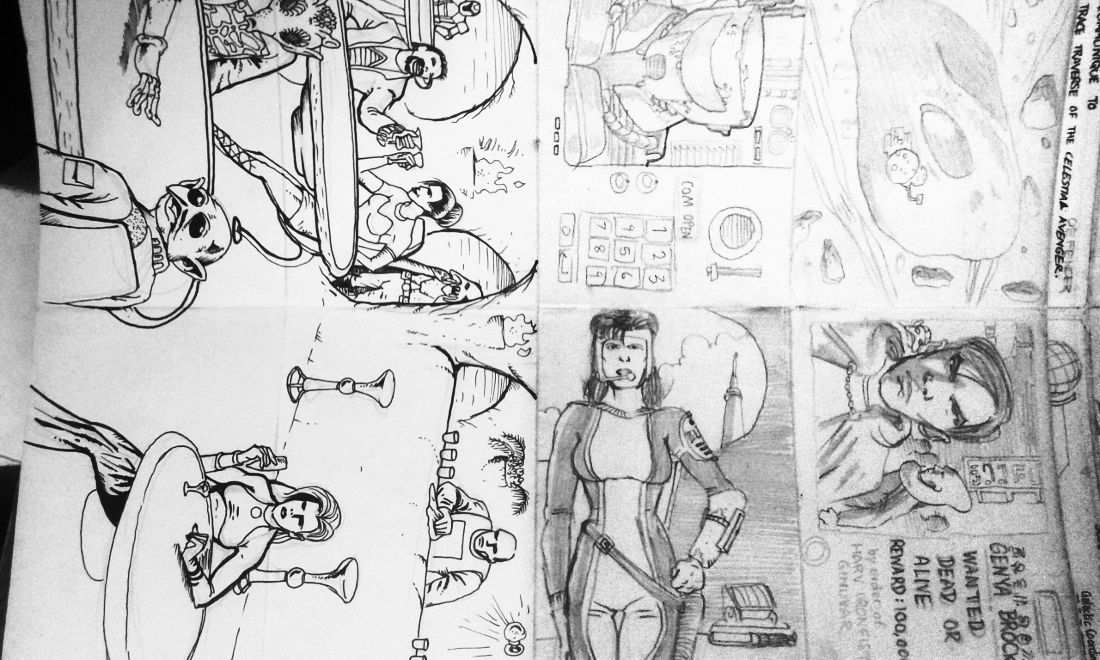 The Return of Genya Brock

Genya Brock, an Outlaw, is listed as Wanted: Dead by a criminal organization that ruled an entire planet. Also trying to capture him is Cragus 12 the bounty hunter from Star Wars Adventure Journal 01. They travel to the Oseon system to investigate. 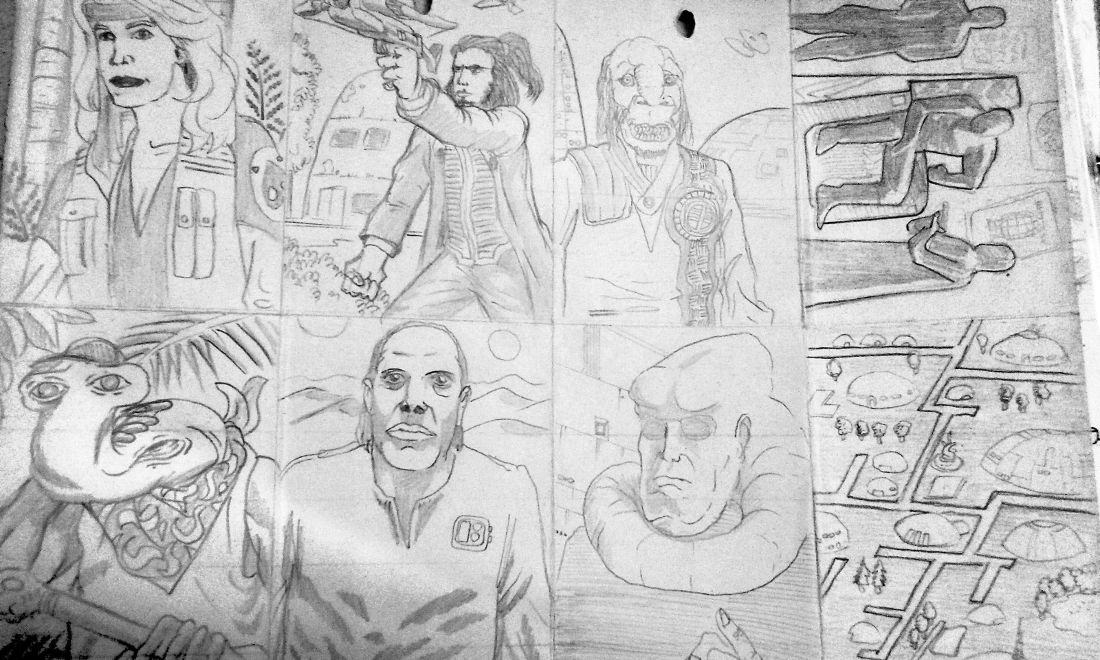 The Return of Genya Brock

While the crime lord and his lieutenants scheme in the shadows, the team meets Platt Okeefe and Tru’ebb Cholakk of the Black Curs commando team. Boddu Bocck from Star Wars Adventure Journal 02 drops by to bag Genya. Of course he fails. 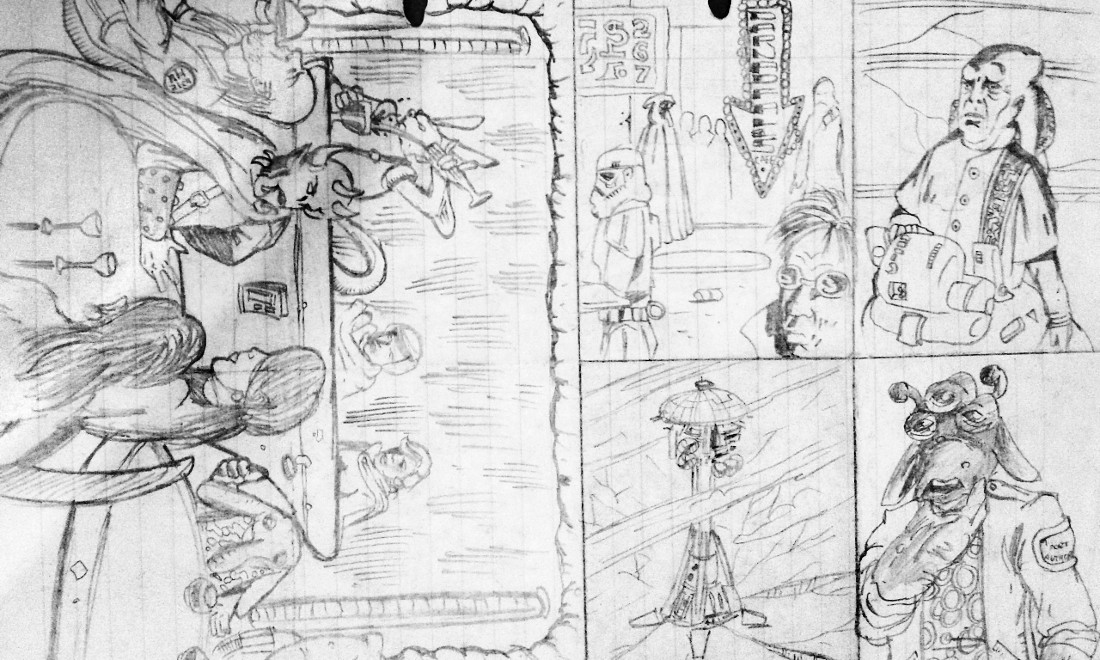 I have no recollection of when and for what I drew the above.