Here is a second set of paper minis created from Ryan “Asok Yeesrim” Rhodes’s illustrations used with his permission. Check out larger versions of the artwork at his gallery linked from his name. The first batch of Ryan-drawn minis can be found here. 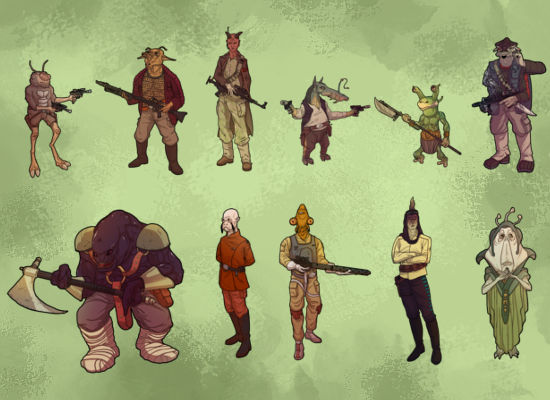 When the Vulptereen grows up he wants to be the Yuzzum

Here’s our first non-canonical alien species created by Ryan, named the Trog – which I thought looks a lot like the yet-unnamed stalk-eyed species created and drawn by Mike Vilardi for West End Games or perhaps a Zilkin which appeared in Star Wars: The Clone Wars.

Also, our first extra wide paper mini by way of the humongous Herglic, which takes twice the width.