A Bad Example of a logo

About six months ago, I ran the third Star Wars D6 game with the GOKL crew, which continued from Episode 2. But I was a bad GM then and did not take notes (mentally and on paper) of what occurred. Here is a run-down of the lost Episode 3 of Star Wars: A Bad Example in the Spacelanes.

Details such as combat and NPC names were lost. New NPC names are fabricated for the purpose of continuity in the adventure and will be considered official for upcoming games.

The crew of the Bad Example, Hunter Maelstrom the freighter captain, Nek’Koh’Moo’Su’May a.k.a Annie the Trianii, Ssssawar the Trandoshan chef and the clone Aden uneasily enjoyed the dinner set out for them by The Five Skulls Brigands. Weapon X, the HK-57 droid, just sat and made small talk. The pirate leader Lord Irontooth had earlier revealed himself as Slaughter Maelstrom, Hunter’s brother. Sitting beside him were his two lieutenants: the suave, young Starson O’Kreem who smiled graciously at the newcomers, and the bald, older Yoat Jumpo who appeared to regard them with distrust.

After dinner, Slaughter excused himself and promised to have a long talk with the crew of the Bad Example the next morning. Yoat Jumpo stormed off quickly after Slaughter left. Starson O’Kreem asked the Master-at-arms, a Verpine by the name of Check Thott to escort the crew to their quarters. They all entered their rooms. Shortly, Annie and Ssssawar met up with Hunter at his room for a meeting.

As they waited for Aden and Weapon X, the room was stormed by a pair of Z-X3 droid troopers armed with blaster pistols. The droids forcefully asked the trio to come with them. At first they complied and were led out to the hallway outside their quarters where two other Z-X3s were standing guard with Check Thott. The droids released the safeties of their guns. Hunter drew his blaster and began the firefight. Annie just started bashing in droid heads. Less than a minute later, Check Thott and the droids were either lying incapacitated or lying in pieces on the deckplates. 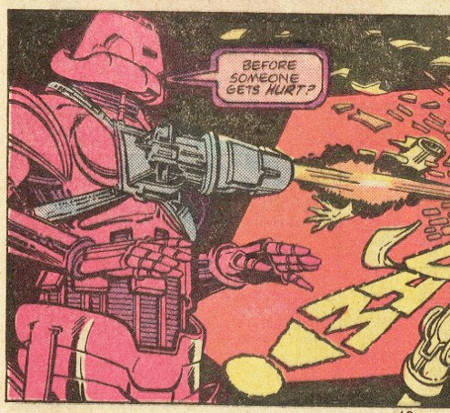 Alerted by the blaster fire, members of the Five Skulls Brigands swarmed into the hallway with blasters trained on the trio. Hunter explained that Check Thott and the droids were about to execute them. Starson O’Kreem and Yoat Jumpo pushed past their men. O’Kreem ordered his men to stand down and find out why Check Thott wanted to kill the Bad Example crew. Yoat Jumpo opened Aden’s and Weapon X’s doors. The former clone trooper and the HK-78 droid were missing from their room.

Hunter was furious and showed his rage while his teammates glowered at the pirates. He demanded they return their missing crewmates. Yoat Jumpo called the trio into a private meeting. He revealed that he was an agent of the Rebel Alliance, attempting to foil the Five Skulls’ attacks on Alliance targets. He proposed that the Bad Example crew helped him in his secret struggle while he used his resources to find out what happened to Aden and Weapon X.

Hunter refused, ignoring Jumpo’s pleas and appeal to their decency. They insisted they find their friends themselves and left Jumpo behind at the guest quarters.

First thing on their itinerary: their ship Raspberry Beret berthed at Docking Bay B-3 with the astromech droid R4-P61 and surgeon droid 2-1B-ER aboard.

They took the elevator which travelled downward to the lower level docking bays. The doors opened and a young boy entered with a box. Ssssawar and Annie forced him to reveal the contents of the box. Intimidated by the lizard man and the cat girl, he showed them the potatoes he was carrying. The boy nervously got off the lift at a level that revealed a spacious chamber with a dozen cooking stations with broth bubbling in pots and meat being sauteed in pans. It was the kitchen level. Ssssawar – ever the chef – almost followed the boy out, but Hunter and Annie reminded them they had a task to complete.

They arrived at B-3. But they were ambushed by a group of armed pirates of various species. Hunter’s rocket pack deposited him atop the Raspberry Beret while Annie and Ssssawar fought below. Hunter got into the Corellian YT-1760 freighter from the top hatch and slew a pirate waiting at the inner door. Strapping himself into the gunwell, he blew apart the mass of pirates outside giving Annie and Ssssawar grief.

He opened the ship’s ramp to allow the Trianni and the Trandoshan to enter. But he suddenly faced a barrel of a blaster rifle. Holding it was Starson O’Kreem who was already aboard the ship. O’Kreem told him that Hunter’s blood ties to Slaughter were unacceptable. Hunter had to die, and he would eventually have captured the rest of the Bad Example crew and took them off station – or have them killed. 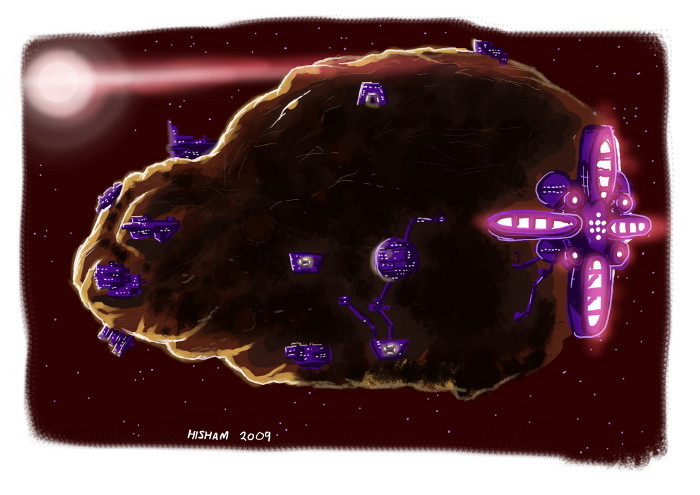 A heartbeat later, Sssawar and Annie sneaked upon O’Kreem from the ramp and set off a brief one-sided altercation. Before long Ssssawar was storing O’Kreem body in his human meat larder aboard the Beret. He hissed, “It’s not cannibalism if it’s not of your species.”

More armed pirates were coming into the bay. Hunter took off with Annie co-piloting and Ssssawar manning the guns. They heard over the comlink that the Five Skulls was about to all-out attack the Raspberry Beret. Squadrons of Zebra fighters and modified light freighters were launched with orders to destroy them. Hunter retorted that a cadre of pirates, under the command of O’Kreem had provoked and attacked them, and they might have even abducted Aden and Weapon X!

There was a long pause. Suddenly Slaughter was on the comlink. He reported that Yoat Jumpo has sliced into O’Kreem’s personal datapad and discovered that he had a group of loyal mutineers that was planning to take over Irontooth Station. Ssssawar, Annie and Hunter had turned most of O’Kreem’s loyalists into mush and/or scrap. The remainder had been detained or killed. He thanked them for flushing out the traitor and persuaded them to return to Docking Bay B-3.

Jumpo cautiously came up to them as they disembarked with weapons ready . He gave them a datapad that showed them O’Kreem’s messages. One message read that he’d sold Weapon X to an unknown party who will meet his agent at the Rodian warehouse sector on Coruscant.

Slaughter asked them to join the Five Skulls once more, however Hunter said he would keep it under consideration. Before that he would have to rescue their abducted comrades first. Ultimately, Slaughter had to agree to halt the raids on civilian settlements as long as possible until they return.

Even though the pirate lord asked for O’Kreem’s body, Ssssawar refused and wanted to keep it for experimental culinary purposes.

Slaughter grudgingly relented, allowing them safe passage off Irontooth Station. Sssawar, Annie and Hunter closed the ramp. Finally, as they took off, their last glimpse of the pirates was only of Yoat Jumpo saluting them good luck.

Less than ten minutes later, the Raspberry Beret had jumped to hyperspace toward Coruscant to rescue Weapon X.