Who watched and caught a glimpse of the Easter egg in the trailer for Zak Snyder’s new film 300? It’s been all over the internet now so if you’re online most of the time you’d probably have seen a screen capture of it in the last couple of days.

Twenty years ago, plus change, Alan Moore wrote a 12 issue mini-series for DC Comics called Watchmen. It was one of the books (along with books such as Art Spiegelman’s Maus and Neil Gaiman’s Sandman) that elevated the generally considered lightweight storytelling medium of comic books into serious literature. 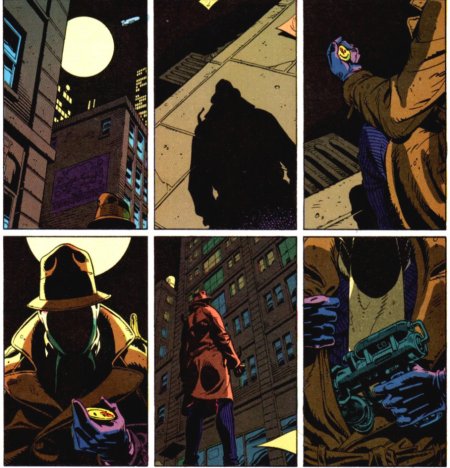 Last week, it was discovered that this image was slipped into the 300 trailer at 1:52 on the time stamp:

Zak Snyder who directed 300 is now slated to direct Watchmen for release in 2008. The image was from a test shot of the Rorschach mask, which looks great from where I’m sitting. This film could ultimately be the best comic book-adapted film ever made, or because of the complexity of Watchmen and fans’ high expectation, it could fail spectacularly. I’m hoping for the former to occur, but… there I go putting my expectations high again.

In the meantime I’m going to try to catch 300, an adaptation of Frank Miller’s 5-issue miniseries from Dark Horse Comics, which apparently did well opening here last week.