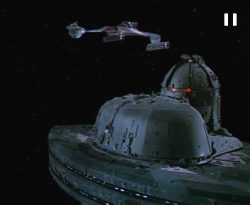 My first foray into the world of Star Trek consisted of a single page ad on a comic (might have been a Gold Key comic) for Star Trek The Motion Picture, back in 1980. It had a picture of the new refitted Enterprise (no bloody A, B, C, or D) with a photo line-up of the characters along the bottom. My first thought was (probably) how great it was to be part of this team, exploring the unknown in the 23rd century (it said 23rd century right there on the movie ad) in such a sleek starship. I don’t remember when I learned that the movie was based on the TV show, or if I learnt it before or after I saw the movie ad.

Anyway some months later, I bought the novelisation of the movie, which I believe might be my first ever movie novelisation bought. Tok & Opah Irfan bought it for me at a bookstore in Taiping (named Mubarak’s, IIRC – might be mistaken) along with the comic adaptation of The Empire Strikes Back in digest format.

Anyway I found the novel (written by Alan Dean Foster) to be quite gripping to my 10 year old mind. It was fantastic visualising myself on the bridge of the Enterprise with Kirk, Spock, McCoy, Sulu, Chekov, Scotty, Chapel and Rand. The threat of “Vejur” (as it was spelt in the novel, no doubt to ensure it doesn’t hint to what Vejur actually is – which the more widely used spelling “V’ger” does)… 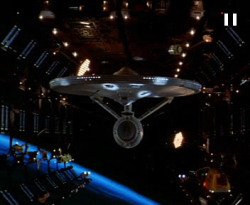 But I’ve never actually seen the movie until well into my mid-teens when TV3 aired it. I remember being very, very underwhelmed by it after visualising the narrative from the novel. Recently I saw STTMP again, the old theatrical version and Pan and Scan to boot, not the more recent Director’s Cut DVD.

Although it’s clear what the script was trying to aim for, it falls flat because apart from Kirk, Spock, McCoy and Decker, no one else is fully fleshed out. Who are they and why should we care for them, one would ask if one hasn’t seen the 79 episodes of Star Trek between 1966-1968. The main plot of Vejur seems to be adapted from the episode “The Changeling” though research will yield the fact that it was really adapted from an episode of the aborted Star Trek Phase II TV series.

In terms of how the story unfolded, it seemed like the crew of the Enterprise was just being shown the plot piecemeal and all they do is react to it. Only Spock was shown as the only proactive crewmember as he went out for a spacewalk to do some honest-to-goodness legwork. (Why he hijacked the spacesuit instead of just asking for it for the good of the mission was beyond me though… maybe he was too proactive there.) 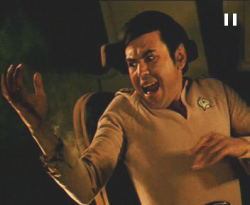 In terms of how the story flows visually on screen there were a some clunkers, especially during tense moments. Commander Sonak’s death wasn’t as effective as it was in the novel. He appeared to just grimace in the transporter beam and simply winked out. Chekov’s hand getting seared by the plasma also seemed a bit off. It was too quick and there were two beauty shots of him grimacing in pain in two different positions which threw off the pacing. The asteroid in the wormhole scene and Ilia’s absorption by Vejur scene both also had some kind of pacing problem at least. Both scenes also ended abruptly, after some hard-to-follow frenetic visuals on screen.

And the Decker’s fate also conveniently ended the captaincy issue of the Enterprise – well, what can you say? If this was a TV show, Decker was definitely a guest star. And if Will Decker was the son of Commodore Matt Decker (of the episode “The Doomsday Machine”) as mentioned in the novelisation, that’s two Deckers out of the game indirectly because of Kirk. Heh! 😉 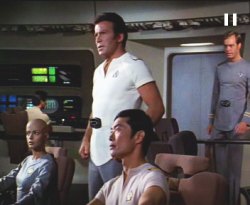 And now the good:

The score is fantastic all the way. This movie introduced the theme that eventually became the famous opening credits theme for Star Trek The Next Generation. Ilia’s theme is melodic and beautiful. The music stresses the fact that the Enterprise‘s voyage is wondrous and majestic. A fun fact is that most of the scenes with the pacing problems which I mentioned above weren’t scored. Perhaps even Jerry Goldsmith didn’t know how to track the music along with the visuals.

Again with the good are the visuals effects. The shots of the K’t’inga cruisers in the beginning (including the Station Epsilon 9 parts), Enterprise within (and leaving) the drydock and the voyage into the depths of Vejur conveyed, like the music, a sense of wonder and majesty. I liked the beauty passes of the Enterprise with her navigational deflector and nacelles aglow, its hull mostly lighted by the ship model’s lights. Every panel of the ship glints differently in the light which gives the illusion of it being hundreds of metres long. 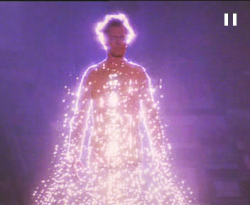 The conclusion is: the movie was a great effects movie, but the script could have been handled much, much better. Robert Wise isn’t an inexperienced director and the technology they had at the time was on par with Star Wars (with Richard Dykstra aboard). But they didn’t seem to find a balance between a regular Star Trek episode, the trappings of 2001: A Space Odyssey (which was the most successful cerebral sci-fi movie then) and a properly paced 2-hour movie.

I haven’t seen the Director’s Cut, which I hear is edited better with unneeded fat trimmed away and some VFX upgraded. So I should take a look at that some time in the near future, I guess. It would give me some insight to the making of this movie.