Kuala Lumpur 2099 was a colossal city-state, among hundred of other city-states which still existed on this dying Earth.

Half of the population of the planet were safely nestled in these cities subject to amazing technology, while also under the watchful eye of the tyrannical megacorporations.  The other half of the population are either rich enough to buy their way onto space habitats across the solar system or are dead, killed by a vengeful mother nature outside the walls of the city-states.

Today I ran a short Savage Worlds cyberpunk scenario for the first time for my son where he played an “information retrieval specialist” with a “switchblade katana” (Yes. I’ll allow that! Same damage stats as a normal katana!) in Kuala Lumpur 2099.

His yet-unnamed retrieval specialist had been paid to break into and steal a file named “deathbringer.odxz” from a terminal in an off-site office of Gajah Terbang Sdn. Bhd., a cybersecurity contractor for the Petronas Corp at the New Kuala Lumpur City Centre (KLCC) Twin Towers arcology.

He left his small workspace at the Pandan Indah arcology and rode the KLRT train to the KLCC arcology beside it. His switchblade katana was folded up and hidden in a forearm sheath.

By sundown, he had arrived at the secondary corporate levels of the structure. Not many people could be seen at the hallway where his target was located.

As he walked by the locked doors of the Gajah Terbang office, he noticed a flying guard drone hovering above it. Using his cybernetic wireless link and a custom application installed in his link, he hacked the drone’s simple brain (rolling his Computer skills +2, thanks to his cybernetics).

The drone immediately believed that its batteries needed recharging. With a puff of quadrotor wash, it abandoned its position above the door and headed to its designated recharge point.

Then the specialist noticed that a satay vendor robot across the hallway from Gajah Terbang had a surveillance device on top of his head which, after hacking into, was connected to the darknet, hinting at a criminal organisation watching the company. He approached the vendor robot who did not seem to notice that he had an extra set of eyes installed. As he bought a pack of six chicken satay for 12 pitis, he hacked into and shut down the connection of the covert eyes.

Then, he walked over to the office doors and used his cyberlockpick to easily unlock the main doors.

The office interior was small and spartan. The outer wall revealed the multicoloured neon lights of the tall buildings and vehicles of Kuala Lumpur. 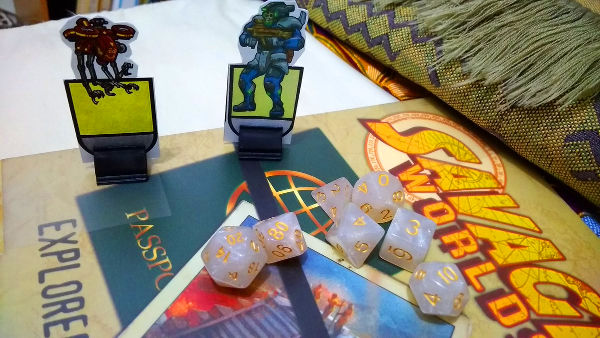 At the data terminal, the specialist noticed that a cyborg ninja with cybereyes and fingerblades was also about to steal data. With a flick of his wrist, his katana shot out to his hand and sprang into its full length.

They fought (with the specialist winning the playing cards initiative), switchblade katana against fingerblades, and although the specialist was hit (with a Shaken status – easily removed the next round with a Vigor roll), he managed to stab the ninja through the shoulder (inflicting 2 Wounds). After that he hacked the ninja’s eyes blinding him.

The specialist searched and downloaded “deathbringer.odxz” from the terminal. Being a pacifist, he refused to kill the ninja who implored him to. He told the ninja to leave and flee, but upon the specialist restoring his sight, the man attacked again. With his injuries (a -2 penalty to his attack rolls) he failed. The specialist punched his lights out.

He was hauling the unconscious ninja out into the hallway when the security klaxon blared. The satay vendor robot asked if it was the satay that caused the man to be knocked out. The specialist (rolling his Streetwise) found a camouflaged maintenance hatch on a grimy wall that led to an unused service corridor…

… just in time, because as the hatch slid close the KLCC Security Battalion arrived with their armoured bodies, smart weapons and drone support.