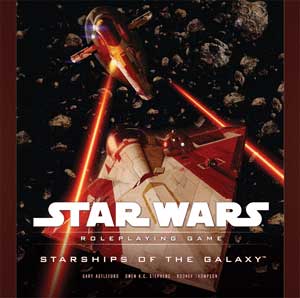 Starships of the Galaxy Saga Edition

Another one of Irfan’s Uncle Gary’s writing project has been officially been announced by Wizards of the Coast, which is Starships of the Galaxy for Star Wars Roleplaying Game – Saga Edition Core Rulebook the third edition of the d20 gaming rules.

The book was a collaborative effort between Gary, Owen Stephens and Rodney Thompson.

I’ve seen the Saga Edition Core Rulebook on display at Kinokuniya the other day, but I haven’t bought it yet. I’ve heard good reviews about it and maybe someday I’ll get a crew together to sit down and play it. Heck, I’ve only played the d20 revised core rule book version via a Play-By-E-Mail game that didn’t really finish.

Maybe I’ll start a new crew beginning with this little guy beside me not really quietly playing with the N-1 fighter I got 8 years ago free with a Happy Meal.

But the real question about the book is: does it have the stats and a write-up for the super awesomely fast Millennium Hawk in there?

You can’t have a starship book without the Millennium Hawk for sure.

Meanwhile, Gary’s brought me to the attention of the planet Irfan at the Star Wars Wiki, which is the planet he named for our Irfan back in 2004 in the article in the now-defunct Polyhedron magazine. Here’s an old Hishgraphics blog article mentioning it. I’ve actually tried once looking for the entry for Irfan at the Star Wars Wiki, but it was more than a year ago so the article might not have existed then.