A long time ago, in a galaxy far, far away, the crew of the YT-1300 light freighter Pretty Enemy was tasked with retrieving a Carbanti H-50 targeting processor from the derelict husk of a crashed Imperial Star Destroyer on the planet Jakku. Six months earlier, there was a battle there where many Star Destroyers  had crashed onto the planet’s desert surface. Although the star system was remote and unremarkable, it had become the very site where the military might of the Galactic Empire was finally extinguished by the New Republic…

Last time on Scavenging The Fallen…

At the end of the trailer…

The team had decided to press deeper into the Star Destroyer Obdurate, leaving the trashed cargo compartment through which they had entered.

Now it was time to look for the H-50 targeting processor.

They had to travel up the next corridor at an angle because the Obdurate had crashed on Jakku and listed at an angle on the orange sands. There was a pair of closed blast doors at the end of the corridor.

The military-grade thick sliding doors were tough as nails. The team discovered this as Hamilton, Lubird, Susan and Zam opened fire at it with their blasters. There was a storm of red blaster bolts, flashes of small explosions and a flurry of sparks. When the smoke cleared, the doors still stood although with several dozens of carbon scoring.

After that, Susan started munching on popcorn she had in her jacket pocket. Sam wished he could use his lightsaber, but his sword did not work yet; not without an actuating crystal.

Donetto strode forth, raised both his arm and yelled at the door, “ZAM ZAM ALAKAZAM!” But the door did not open. 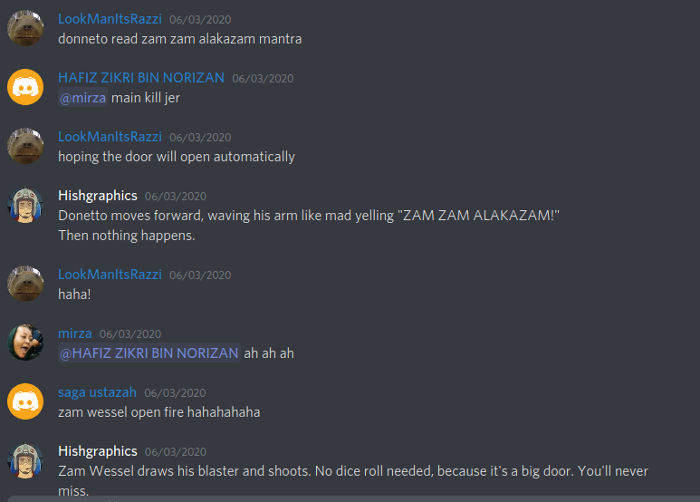 Zam tried to hotwire the door keypad. He crossed the wrong wire and the entire keypad flowered like fireworks.  (Najmi rolled 3D+2 for Zam with a difficulty number of 10, but got a 7.)

Donetto decided to pass his grenade along to Hamilton, who will set an explosion that would punch a hole in the door. (However, the smuggler’s Demolition skill was only 2D+2 and he needed to hit a 15 DN. So he gave the grenade to Hamilton who had a Demolition skill of 4D.)

Everyone took cover, then the grenade exploded.  When the smoke cleared, the doors were still standing. Donetto yelled, “Plot twist!”

However, the concussion had blown open a wall panel. There was an opening that led into the maintenance space between the walls. And from the looks of it, they could bypass the blast doors through it!

Lubird entered first, his darkvision eyes allowing him to see machine parts, cables, wires and pipes in the maintenance space. Everyone else followed suit and Susan was the last as she munched on her kuaci seeds she had in her flight suit sleeve pocket.

(Having rolled a 3D Perception result of 14 over a 7 DN,) Lubird heard voices ahead and signalled the team to be silent.  A voice in the corridor behind the wall said, “I think the explosion came from here.” There was a pause, then another voice spoke out, “Who else can be here? Only we know that the things are here.”

There was a discussion whether they should sneak out and surprise the newcomers, but Donetto suggested they keep moving silently. He joked about having a cloak of invisibility, then confidently walked his head into a low-hanging pipe with a loud BOING! (Donetto’s player Lukman failed his 4D Sneak roll with a 4 result — all ones. Everyone else rolled well, though.)

They heard the voice again, but further away. It said, “What did you hear?”

The other person muttered, “I’m not sure.” Because most of the team succeeded in being very stealthy, the voice through the wall then said, “It’s probably nothing. Let’s go.” And the voices disappeared into the distance.

At this point there was complaint from Lubird that Donetto – behind him – was poking his rear. When Sam Aiman shone his glow rod, Lubird noticed that it was only his blaster.

The team stretched their head out of a hatch in the wall. They had come out of the wall 20 meters away from the blast doors.

A minute later, they entered some sort of laboratory. There were three cabinets here, and another door at the far end of the room. All the lab equipment here had been utterly destroyed by the crash 6 months ago.

Sam opened the second cabinet and found a silver container in it. The container was tightly locked. Susan took it from him and said she could pry it open with her long, well-manicured fingernails. (She needed to roll her 3D Strength vs 7 DN —  12 DN, if she did not use her nails — and got a result of 12!) The container popped open and within are three tiny crystals: a blue, a green and a red.

Sam wanted to test if these were lightsabre actuating crystals but they needed to find a workshop so he could install a crystal.

Sleep Now In The Fire

Meanwhile, Donetto searched for something useful in the lab, but (with a miserable result of a Search roll) he found a old, expired can of sardines instead. Frustrated by the find he popped the can open and ate a sardine.

It took less then a minute for the mouldy sardines to work. The smuggler felt his stomach churning and a strong need to projectile vomit. He fell onto the deck, writhing in agony. (Lukman rolled his 3D Stamina, 12 DN, but got an 8!) 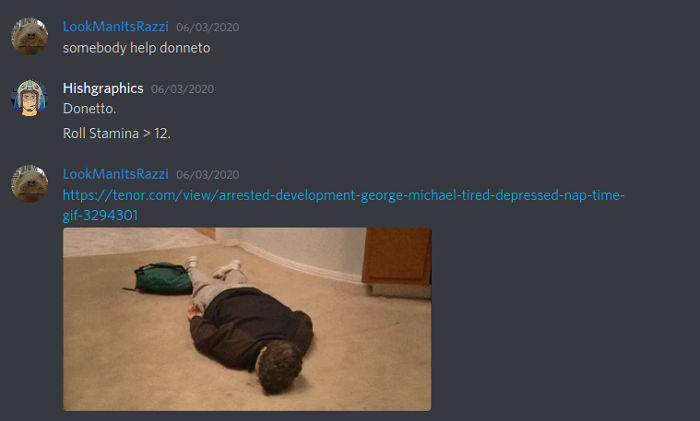 Hamilton was the one most trained in field medicine, so he grabbed the medpac from Donetto’s belt and opened it up. He quickly diagnosed the ailment and got the medpac to synthesise a medication. He slipped the drug into the hypospray, placed its nozzle on Donetto’s thigh and pressed on the trigger. The medicine worked fast and soon Donetto was able to stand up and walk. (Hamilton’s player Syahiran rolled his 4D First Aid, 10 DN, with a result of 12!)

At this point, another door opened up and Susan walked out of the fresher. She had gone to refresh herself and no one had noticed.

The discussed if they should return to their YT-1300 light freighter Pretty Enemy so Sam could fix his lightsaber and Donetto could rest for a while. However, they decided to press on. They had yet to retrieve an H-50 targeting processor from one of the turbolasers, which would earn them 10,000 credits.

The team then sneaked out of the laboratory, and soon they were navigating the tilted corridors of the Obdurate again. That was when someone’s comlink beeped loudly.

The comlink crackled, “SUSAN! I KNOW YOU’RE HERE ON JAKKU. I’M HERE TO GET YOU! DON’T RUN!”

Everyone stopped abruptly. Susan looked at the others and shook her head. She did not know who was calling her at this time! The transmission continued, “YOU THINK YOU’RE SUSAN SUNBREAKER! BUT YOU’RE NOT. YOU HAVE NO IDEA WHO YOU ARE. WE WILL COME FOR YOU. WE WILL ALL COME FOR YOU!”

Then it ended. Everyone was bewildered. Who could have know how to contact Susan here on Jakku? What did the speaker meant when they said that she was NOT Susan Sunbreaker? Who was coming for Susan?

As the team turned a corner still puzzled by the call, they came face to face with three Imperial Stormtroopers who each had their blaster pistol pointed at them.