I have been GMing some very simple scenarios with Irfan. Mostly it’s been dungeon crawls through caves with traps and obstacles, trying to find his way out. Today I read this article from Geekdad written by Daniel Donaho, which has some ideas in how to make things more interesting when playing with children.

Is four-years-old too young to play an RPG? Not if you have a couple of older children (say 6 or 7) play with. Of course, if you want children to abide by all the rules exactly and have a detailed knowledge of movement and encumbrance rates and initiative then you are setting yourself and the kids up for failure and a pretty uninspiring time.

The focus at this age should be on the “role-playing”, rather than “roll-playing”. 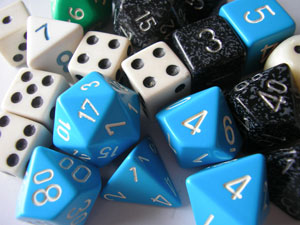 Gary’s dice and then some

You need a game that will take anywhere from 20 – 60 min. It should have a clear and simple narrative. Young children really grasp the idea of a linear story and strong characters. So, rescuing someone or something, or climbing to the top of a mountain. These things make sense and are interesting goals for young children (as long as you throw a few encounters along the way). This age group also responds well to using miniatures. They find it easier to role-play characters they can see. Though, they can do it with paper and pencils around a table, but they prefer to have a representation of their character.

For this reason, sometimes it is good to get them to draw their character. Also, no matter what the game as them to choose three words to describe their character and explain they have to act like their character. Sometimes you get words like “red”, but to see a child role-play “red” can be a very comical experience.

Like I said, be flexible around the rules. That said, it is amazing how quickly children this age picked up on the idea that rolling the dice was crucial to an outcome. So they’d say, “I attack him, where are the dice?” without drawing breath. Only in the beginning will they need to be reminded to roll. They pick it up quickly. Now, surely developing an appreciation for the dice is a fine achievement and a valuable lesson for any future role-players.

With regards to the final line of the quote above, my rules with Irfan are pretty simple. Roll 2d6 to beat the target number. An easy task is 4, moderate 5 and difficult 6. He enjoys it enough to draw out the maps of the cave in advance, then call me in to GM him. I can’t wait for him to start playing Star Wars or GURPS or investigating the latest shenanigans of Nyarlathotep.