Cinema 6 is a new D6-based role-playing game produced by Wicked North Games, which uses the OpenD6 initiative released by West End Games. The D6 system, of course, is a long standing tabletop RPG engine which had its origins in the Ghostbusters RPG and developed further with the Star Wars RPG.

The first setting book for Cinema 6 to be released will be the sourcebook for the fantasy setting named Azamar. Here’s an excerpt from the chapter “Understanding Azamar”.

The co-founders of Wicked North Games have given me the task of coming up with some black-and-white illustrations for Azamar. The first artwork I was assigned with was the exterior view of the Immyr city of Guradiin Ithural.

Here’s a brief description of the city:

The surface capital of the Immyr, Guradiin Ithural is a work of stone crafting mastery. The entrance to the city, inlaid deep within the southern mountains of Evercrow, is a magnificent sight. The city gates sit at the top of several shelves of walls, which cross back and forth in approach to prevent direct assaults. Tactically, Guradiin Ithural is impenetrable, located at the back end of a trench cut into the mountainside, which funnels any approaching army considerably enough to cut them down effortlessly. 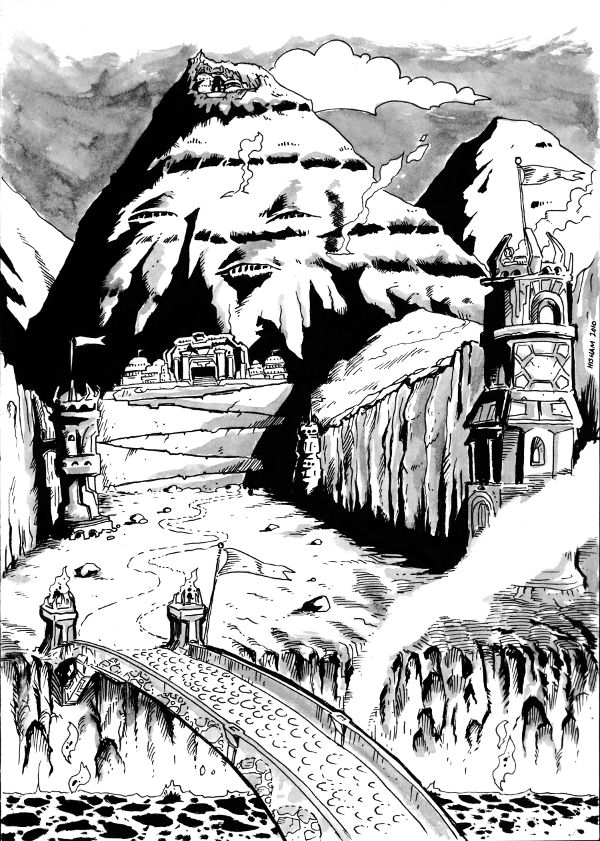 The surface city of the Immyr