After tangling with what appeared to be OPA infiltrators, saboteurs wearing state-of-the-art tech and a figure in the old tunnels enshrouded by glowing blue fireflies, Kazuo Khan woke up in a hospital. He also gained a new cat named Aki.

On his way home from the hospital, he stumbled across two rival criminal organisations in an alley. They captured Kazuo when he revealed himself as a police officer… 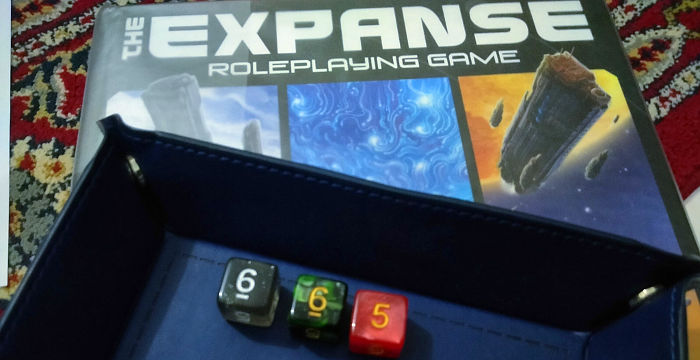 The Expanse with 3d6

On days like these, Kazuo Khan wished that he was back on Mars with his sister Jirou.

Armed with automatic weapons, the criminals herded Kazuo into an abandoned palmyra palm orchard. It was a large artificial cavern which was once owned by Archean Biotechnology, which funded most of the operations on the asteroid 643 Scheherezade, also known as “Zadi”. Kazuo recalled hearing on TV that Archean had been bought over by Mao-Kwikowski Mercantile, and would be selling the company piecemeal.

Though untended for months, the palmyra palm trees still thrived, only with thicker undershrub growing wild on the orchard floor. Kazuo saw a huge Archean “A” logo on the curving stone wall on the far end of the cavern. They travelled towards the stairs that led up to an enclosed control platform installed high on the near wall.

From the expansive windows of the control platform, Kazuo could see the entire orchard, including the overgrown pathways, maintenance sheds and a murky pool in the middle of the cavern. Clusters of sun lamps on the ceiling illuminated the entire space. 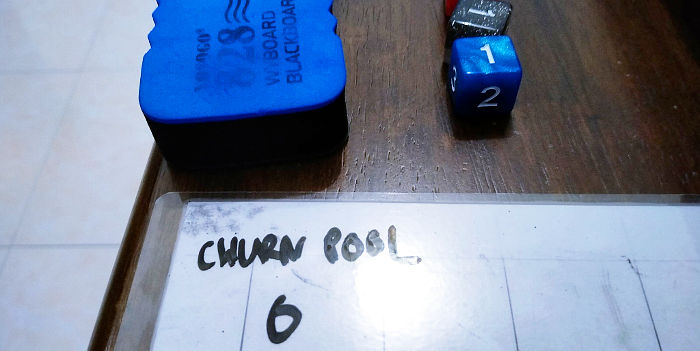 When they had comfortably settled on the deck of the control platform, the members of the two crime gangs introduced themselves. The cyborg gang, Babylon Brotherhood, was led by Verheiden Reza. The Brotherhood was based in the township of New Aberdeen. The more traditional gang, Corvid Dark, was led by Toru Wengthai who operated in the Gamelan Sakti settlement.

They all trained their weapons on Kazuo.

In his cold electronically modulated voice, Reza said to Kazuo, “Why were you spying on us? What do you know that we do not?”

The more human voice of Wengthai barked softly, “Did you have anything to do with the disappearance of Bright Blade syndicate?”

Aki, in his catbox by Kazuo’s feet, also joined the majority and meowed accusingly at him.

Bright Blade was the crime syndicate here in Gertak Lembu whose activities Kazuo had attempted to thwart at one time or another. They were gone?

“Listen, Toru,” said Reza turning his gun on his rival. “I claim this territory for my own. Go back to Gamelan Sakti.”

“No, Verheiden,” the meek-sounding man said his big gun levelled on the cyborg. “Gertak Lembu is where I wish to expand. Stand down now or we can all die together here!”

All the henchmen turned their pistols at their counterparts as well.

“WHOA! Hold on!” interjected Kazuo loudly. “Stand down! No need for bloodshed today!” 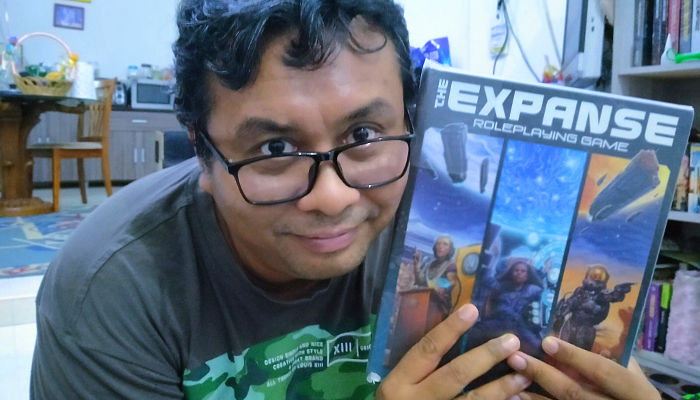 Everyone, had their weapons still raised, slowly looked at the police detective.

“Listen,” Kazuo said. “I just got out of the hospital after two weeks in a coma because of an explosion at the water tanks. I wake up and Archean has been bought over by Mao-Kwik. All I want to do is to bring my new cat home and take a long rest today!”

“Okay,” the exasperated Kazuo began. “Let me tell you what I know.” Then he told them his misadventure at the Gertak Lembu water tanks but stopped short of telling them about the figure surrounded by a cloud of glowing blue fireflies. His own colleagues had disbelieved him, chalking it up to concussion caused by the explosion. He also mentioned the infiltrators who had OPA tattoos.

“OPA?” both crime bosses said. They looked at each other and lowered their weapons.

Reza’s artificial eyes looked thoughtful. He explained, almost to himself, “The Outer Planets Alliance have been trying to become a legitimate government to Belters. They have even reached out to our groups here on Zadi. However they are too fragmented to be effective. Additionally different OPA groups possess different agendas.”

“Ya, beratna,” said Wengthai, signalling his men to stand down. “OPA bad for business, mi pensa.” 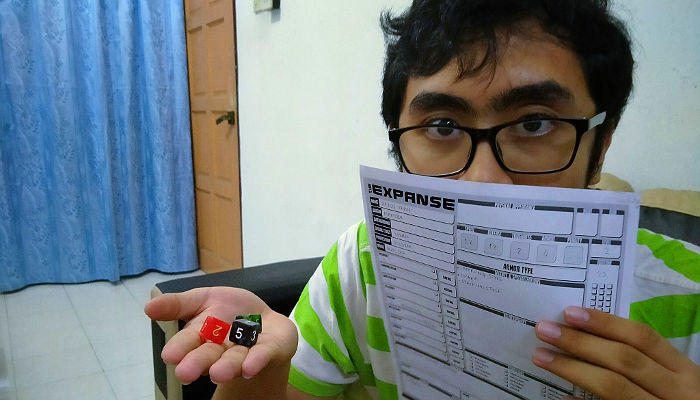 Fly in the Ointment

Everyone stood down, except for one of the Corvid Dark enforcers. The man stood in the back unwatched by anyone else except for Kazuo who faced him. Kazuo thought about to pointing this out, but this new development distracted him.

As everyone was discussing excitedly about the involvement of the OPA, the lone enforcer hit a button on his smartwatch and said, “Now!”

Everyone stopped talking and turned towards the enforcer. The man turned his automatic pistol at his fellow Corvid Dark enforcer and fired. The other fell, clutching his bleeding chest.

“What are you doing?” Wengthai stuttered, looking at his man.

That was when Kazuo noticed something travelling in the cavern above the abandoned palmyra palms. To be precise, there were three things: spherical combat drones, held aloft by thrusters. Two of them sported machine-guns  on their side, while the third carried a rocket launcher under it.

“Guys!” Kazuo yelled, pointing out through the glass. Kazuo also noticed that Reza and his enforcer mechs appear to be frozen. Somehow their servos were being remotely jammed! 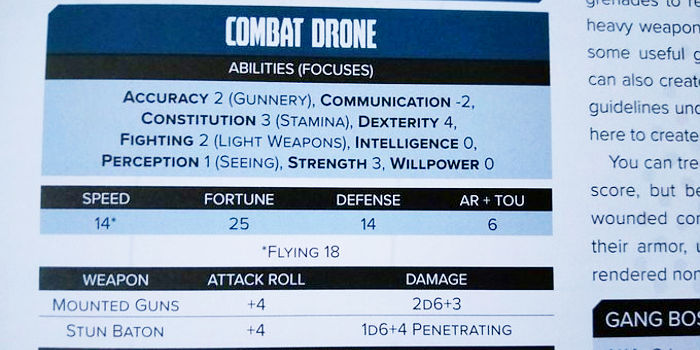 The rogue Corvid Dark enforcer fired his automatic pistol at both Wengthai and Kazuo. Kazuo dropped behind a waist-high monitoring console that was offline. Bullets pinged off the console and smashed into the glass behind him. Another bullet struck Wengthai’s thigh and he fell.

When the enforcer paused for a moment, Kazuo reached out to Wengthai and pulled him back behind the console as well. The enforcer tried to shoot at them but missed.

“Can I have my gun back?” Kazuo asked and he soon had his pistol in one hand.

“Also, can I borrow your gun?” And then, Kazuo held Wengthai’s gun in the other.

“Mi gonya need it back, pensa?” the Belter crime boss said with a smirk, handing his automatic pistol to Kazuo. Kazuo smiled, but only for a second. Then he popped up and back down while firing with both weapons. Only one bullet struck the enforcer on his right shoulder. Though injured, he still stood and returned fire only to miss. More glass shattered.

Through the broken window, he saw that one of the drones had peeled off from the others and was flying towards the control platform. Kazuo figured that in a 0.4g environment, he could jump out the window and survive the fall, to escape the fray.

“There is an EMP device in the crate behind the gunman,” a voice suddenly spoke inside his head.

It sounded like both a whisper and a scream, and both male and female. Now he was hearing voices? Maybe he was concussed badly after all.

“Set off that device or you’ll die! Now!” the voice was firm and frighteningly adamant.

Although dazed and bewildered, Kazuo broke cover, rushed forward and fired both guns again. He caught the enforcer off guard (with only one Fortune left) and put a bullet through his head. 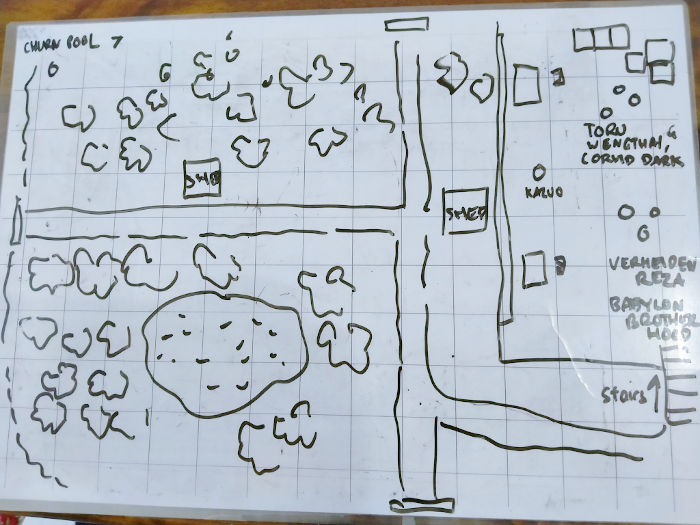 When Kazuo got to the crate, the combat drone had lowered its machine guns into firing position and was approaching, 15 metres away from the broken observation window.

He got the crate cover open and indeed there was an EMP device within. What was a military grade EMP device doing here in an abandoned orchard monitoring platform? And who talked to him in his mind?

Because of his technical training (and some Stunt Points), it took 10 seconds for him to figure out the machine and began charging it up. Furthermore, his engineering acumen allowed him to thoroughly understand the device’s systems and Kazuo believed that with the proper materials he could build another.

The lead combat drone hovered in through the window, its thruster wash blowing dust and light debris all over the control platform. As it aimed it machine guns at him, Kazuo slammed his palm down onto the ACTIVATE button.

There was a loud otherworldly sound that pulsed out from the device. There might have been a hum or a hiss or a crackle, Kazuo was uncertain.

The combat drone fell onto the deck of the platform, creating a visible dimple on the textured metal. Outside, as the orchard sun lamps went out, Kazuo spotted the other two drones falling into the trees below.

Also, Reza – whose body was mostly cybernetics – became limp and fell to the floor with a loud thunk.

In the platform, emergency illumination strips began to glow. Kazuo walked over to Wengthai, who sat up nursing his injury. He said, “Hand terminals dead.”

Wengthai looked at and nodded approvingly at the detective.

It took a minute for Kazuo and his technical skills to reactivate Reza’s cybernetic systems. After agreeing on working together in light of this unexpected infiltration by an unknown entity, Reza called both his and Wengthai’s people to the orchard, now enveloped in shadows in the cavern outside.

Soon, members of Corvid Dark and the Babylon Brotherhood swarmed into the orchard. There were medics, technicians and other enforcers. Kazuo could tell the thematic differences apparent between the two gangs by sight.

It was the first time Kazuo saw so many members of criminal organisations together. He thought for a moment about arresting them all, but the moment passed. He went to pick up Aki in his catbox, took his leave of Toru Wengthai and Verheiden Reza. They agreed to together investigate suspicious movements by external parties, such as the OPA or the United Nations or the Mars Congressional Republic. Or perhaps it was one of the huge corporations?

Kazuo climbed down the stairs from the platform to the orchard floor, now illuminated by new pylons constructed by Corvid Dark and the Babylon Brotherhood. Technicians were looking for the two fallen drones.

Kazuo turned to the exit where armed enforcers stood guard.

As they let him through, a voice bubbled up once again in his mind, “Very efficient at keeping the peace, Kazuo. Just like when you were a kid.”