The blog is thirteen years old this year.

It has gone on for far longer than I could have imagined back then, with now over a thousand entries. I selected the CMS formerly known as Pivot to build my blog back in 2005. Two years ago I replaced old, vapourware Pivot with PivotX, its successor. Little did I know that the PivotX was already also vapourware by that time. 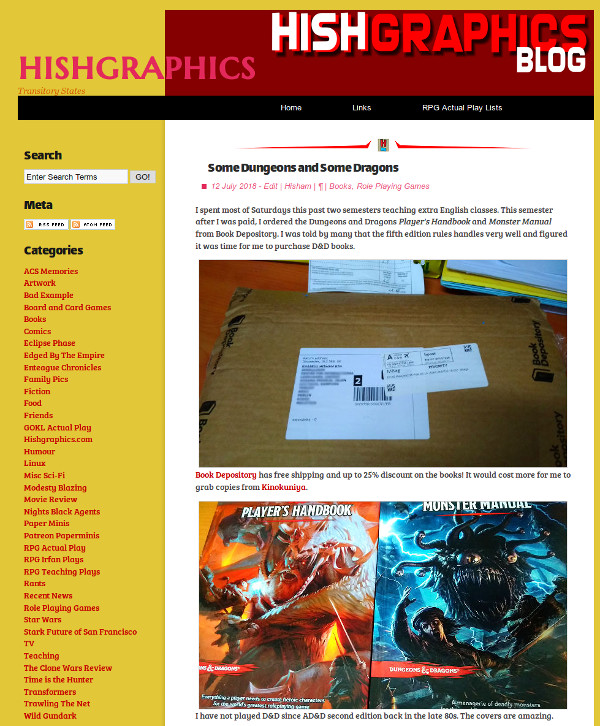 The Pivot blog has changed its look many times over the years. This was its final form before its retirement.

Welcome to the Hishgraphics WordPress Blog!

For the time being the old blog still exists at its original URL here, but I have decided to install WordPress into the root folder of the web server and eventually use WordPress for everything. I decided on WordPress because it is currently actively supported by developers.

Meanwhile PivotX will slowly continue to fail as old PHP functions are depreciated over time.

Over the previous weekend (and after two weeks of experimenting on a  test site), the entries from the old blog was imported into the new WordPress blog using WXR files exported from PivotX. However, although all the original posts, categories, tags, users and pages were successfully imported, I was unable to automatically port over images and blog comments. This is a problem to be solved in another day.

Also, I plan to eventually replace the ZenPhoto gallery with a WordPress one in due time.

In the meantime, I will have to upload the images manually and fix all the broken links from the old blog. Feel free to explore the mostly image-deprived site and check back to see the images being repopulated into the image folders.