I played for the first time in GOKL’s still-new Warbirds RPG campaign yesterday. 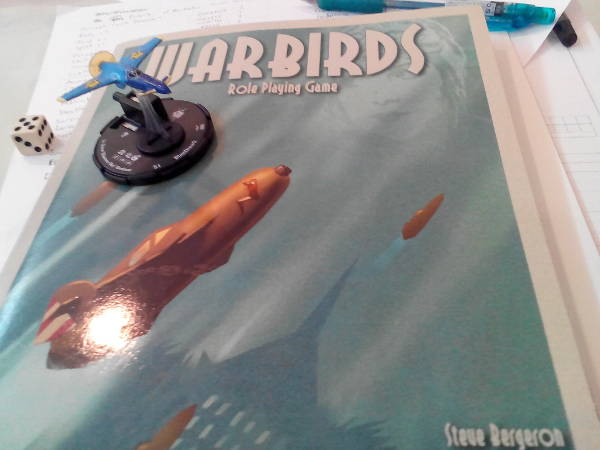 We fly the friendly skies

Warbirds is a dieselpunk role-playing game where players are mercenary pilots who fly alternate-universe versions of circa-1940 combat fighters among the Caribbean Islands. But this version of the Caribbean Islands – including the parts of the Yucatan and Florida – were enveloped by a strange devastating storm in 1807. When the storm abated, the islands found themselves floating in mid-air over a sea of murky clouds. At night, the stars are different than the ones the survivors are used to on Earth. The world was called Azure.

After more than a century, the islands have formed new nations and new alliances. Using local exotic material known as floatstones, hovering ships were created as vehicles to travel between the islands. A mercenary group known as the Esteemed Guild of Combat Aviators was formed to fight to gain fortune among the cut-throat politics of the nations of Azure.

Player characters are from various peoples and nations of Azure who joined the Guild to be their combat pilots. The system uses only a d6 which makes it quick and cinematic. Character generation too was quite simple and I created a character swiftly from reading a few pages in the rulebook.

I played a rookie pilot named John Piriki’ki, a Carib journalist from the floating island of Barbados who arrived on the island of West Grand with a bunch of other Rookies via a Guild Carrier commanded by Captain Martin. John had been recently assigned to the Grandstander Squadron by the Guild with mechanics. The arriving Rookies were greeted with pomp and circumstance by the daughter of West Grand Governor – who appeared to be a bit bloodthirsty against their enemy, the island of East Grand.

The squadron’s publicist Esteban Munoz met John who then introduced him to the rest of the squadron: Sous Chef, Pyro, Deadline and squadron commander Tequila. John also showed them his owl tattoo on his right deltoid. The publicist has arranged for Grandstander Squadron to have a press conference in the city.

Local journalist Alan Ashland of Bradley Printing Works arrived at the airbase to ask for the Grandstanders’ help.

He knew that the squadron would be called for a night reconnaissance mission over East Grand soon, and would like them to drop leaflets there calling for the enemy to lay down their arms because both islands had been one nation once and a lot of families were separated by the war. Ashland and his allies in the city wished for a bloodless end of the war. A war between East and West Grand would be a bloodbath for East Grand as they had minimal armed forces and combat equipment.

However the West Grand Governor wanted East Grand to be utterly defeated in war. So this would have to be an illicit mission.

Not only did the Grandstanders agree, Deadline and John offered some ideas to the leaflet (by rolling on their Craft: Journalism skill). 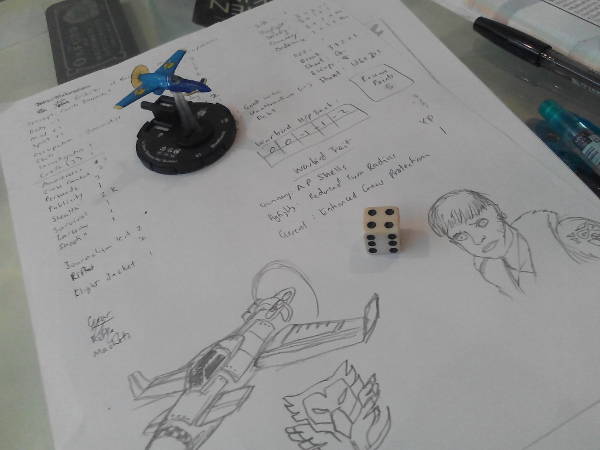 The aviators of Grandstander Squadron were sent to meet journalists and paparazzi at a hotel. They were ordered to be extra careful as killers hired had been targeting Guild pilots in West Grand. A lone pilot could easily be targeted for death by East Grand assassins.

As they got into town, the Grandstanders saw that Captain Martin was having his own press conference at the opulent hotel lobby near where his Guild Carrier was docked. The other Rookie pilots were lined up behind him as flashbulbs went off in a rapid staccato. There was a loud bang and Martin fell, shot in the chest in full view of the public. Panic ensued.

Sous Chef and John did some crowd control while Tequila, Pyro and Deadline sprung into action, looking for the shooter.

They spot masked men running in an alley and mounting horses to escape. Pyro and Deadline commandeered bicycles and pedalled hard to keep up with the assassins. Tequila overtook them with a horse. They managed to take down a fleeing horse. Pyro and Deadline confronted the fallen rider but were badly wounded in the process.

Tequila chased the other rider to the edge of the island where a floating skiff awaited. He intercepted the rider and subdied him before he reached his escape vehicle. The skiff’s engines roared and headed out over the Murk into the distance. Tequila called it in, alerting Sous Chef and John.

Piracy over the Murk

John pointed out that his plane was still in launch position in Martin’s Guild Carrier with the other Rookie planes. Sous Chef and him sprinted for the ship. Security guards forbade their boarding of the Guild Carrier but John informed him that Captain Martin had been shot, chaos was abound and only they could chase after the culprits. But they needed the planes.

Shortly, two planes were dropped from their bays. Sous Chef and John headed toward where Tequila last saw the fleeing skiff.

They quickly see the ship and drop behind it, staying above the Murk, trying to get the skiff to stop by intimidating the boatman with their guns.

Then, they saw a larger ship appearing out of a cloud: a pirate Drop Carrier – which then launched a flight of four planes which flew in toward them on an intercept course.

Sous Chef radioed West Grand to inform them of the newcomers. When the word reached Tequila as the local constabulary arrived to apprehend the assassins, he headed back toward the airbase for his plane.

John said, “Okay, Sous Chef. Show me how you prepare fish for dinner.”

Sous Chef led the charge against the attackers, firing into them. The squadron broke into a dogfighting cloud of chaos. (Because we almost consistently rolled high and the bad guys low) Grandstander Squadron – although outnumbered – tore into the attackers, taking them apart with their cannons in midair. This caused the Drop Carrier to launch the rest of its fighter complement, which Sous Chef and John also made short work of.

The lone survivor attempted to return to the Drop Carrier. The landing crew tried desperately to wave him off. Aflame and heavily damaged, the plane arced down into the Murk never to be seen again. In the meantime, the skiff had been picked up by the Drop Carrier and the large airship began to retreat.

The Grandstanders charged for the airship, dodging flak bursts around them. As the duo soared over the Drop Carrier, John released his only payload: a bomb. However (I rolled a 1) the explosive device missed the moving target. (I forgot to invoke my Good Luck Major Advantage for a second roll!)

Then West Grand air traffic control radioed them to pull back as they were getting out of range of the communication relay.

The Grandstanders stood down and returned to base, meeting up with Tequila’s plane on the way. 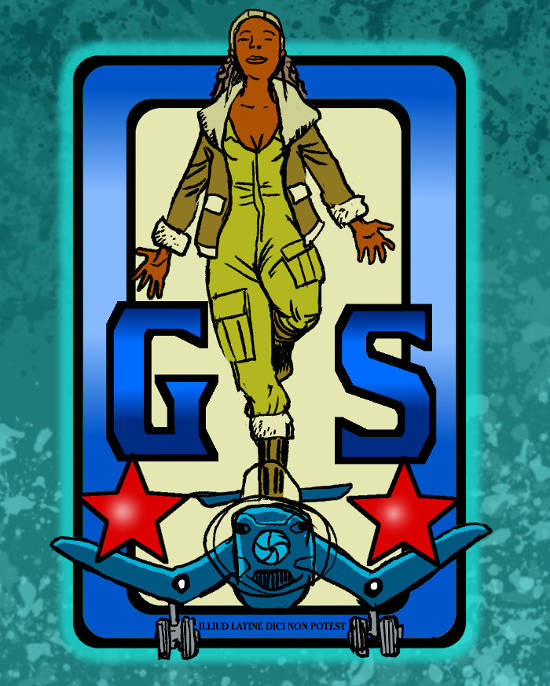 Deadline and Pyro were hospitalised with gunshot and abrasion wounds. As they were recuperating they were visited by two corporations wanting to sponsor them and plaster their logos on Deadline and Pyro’s planes.

The first was a lighter company, which would be perfect for Pyro.

The second was SJ Shipyards whose representative, Ms. Emilie, wanted them to star in a movie that would feature fighter planes, which was more lucrative and would increase their celebrity status.

They opt for the second.

Back at the base, the Grandstanders were preparing to go on a night reconnaissance mission over East Grand when the Governor’s daughter arrived in her car. She was furious, telling Tequila that she knew that they were about to drop the leaflet package that they suggested to Alan Ashland. And Ashland had printed Deadline and John’s names on the leaflets as writing credits.

As she was arguing with Tequila, she kissed him savagely. Then there was a burst from a flashbulb and a photographer retreated from view. She told him, “If you go on with this mission, the photograph will make news.” She smirked evilly as she retreated back to her car.

Tequila thought that John needed a callsign for the squadron. Everyone mulled over it for a moment and finally decided on one.

Soon, Tequila, Sous Chef, Deadline, Pyro and the Rookie Strix headed under the cover of darkness toward East Grand. They approached from the north, taking a long way round.

But as they flew over the East Grand capital, they beheld an unexpected sight: docked over the city were several carriers, frigates and one cruiser bristling with weapons apparently Santiago-manufactured.

It appears war would begin soon.