Yesterday, Irfan and I finally started playing the X-Wing Miniature Game that was given to us by Darren when we last visited Kuala Lumpur. What Darren gave us was astoundingly lots, so many thanks to him for letting us have this trove.

We started with the basic game. Irfan controlled an Incom T-65 X-Wing fighter and I controlled two Sienar Fleet Systems TIE/ln fighters. His Pilot Card is Luke Skywalker, and mine were “Mauler” Mithel (apparently the father of Reljii Mithel) and Academy Pilot (a strange name to give your son, Mrs. Pilot). We did not carry Upgrade Cards, like astromech droids and proton torpedos. 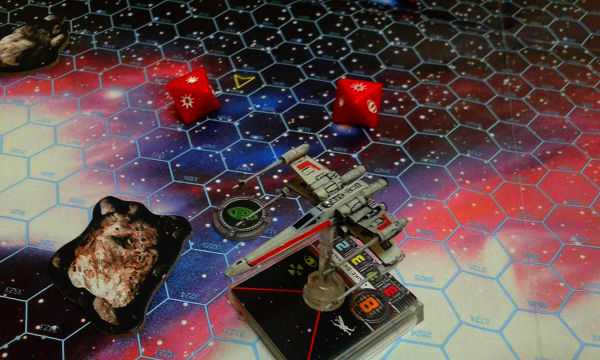 The sculpts for these minis are amazingly detailed. One might even want to collect them because they look very nice indeed. I have seen the Corellian Corvette mini in a box back in KL some time ago and it looks fantastic. And still too expensive for me to pick up. 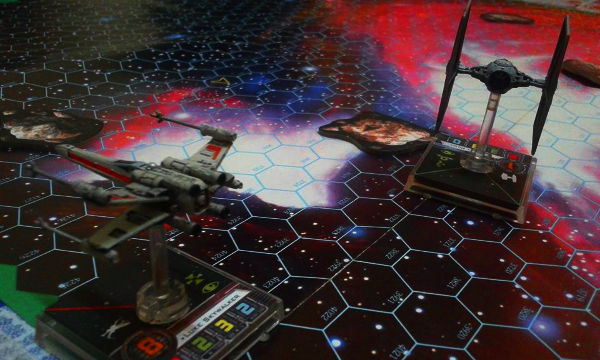 The game is at its core elegant in its simplicity. Initiative, attack, defense, weapon damage, et al are numbers assigned to you on your pilot card. You manoeuvre your ship, then you attack if you are able to. Deciding your move requires a Manoeuvre Dial that you would turn to your choice of move, but you would reveal them from the lowest initiative so the higher initiative players would know what your move is. Moving your ship requires a Manoeuvre Template which would help you move anywhere between 1 to 5 spaces in Straights, Turns or Banks.

Attacking requires the roll of a number of red eight sided dice where you might hit with normal damage, hit with critical damage or “Focus”. Defence requires the roll of a number of green eight-sided dice where you might evade or “Focus”. A Focus token is used when you declare that the pilot will be Focused after its manoeuvre, which allows the pilot to able to turn any red or green die with a “focus” result to either a hit or an evade respectively.

Hits and Evades cancel each other out. Remaining Hits is the damage dealt out to the fighter being shot at. The X-Wing has Shield Points that has to be depleted by attacks before you start to affect its Hull Points. Deplete a ship’s Hull Points and it gets destroyed. 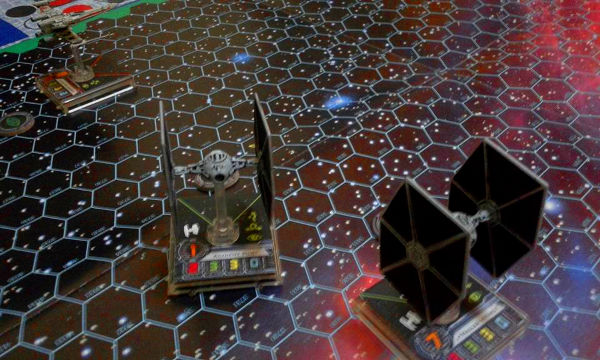 Sienar Fleet Systems made these

So we used the old West End Games’ Star Warriors battlemat, which looks kind of busy and distracting but it is less busy and distracting (and far less embarrassing) than our linoleum. Asteroid tokens were scattered all over board as obstacles. We just chased each other around the board for a bit. I attempted to outflank him with my two TIEs, but it was much more difficult that I thought it would be. 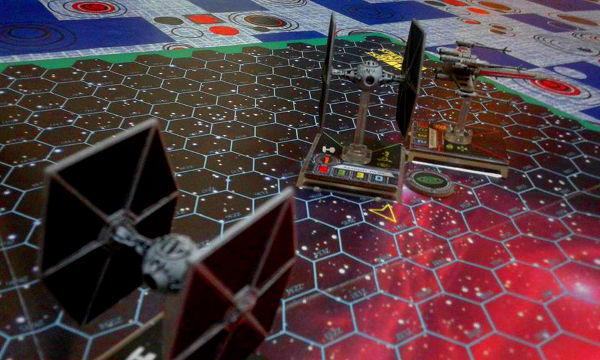 Irfan scored some hits with his Taim & Bak KX-9 wingtip cannons on Mithel’s TIE early on. One more point of damage inflicted, and Mithel would be all like, “LOOK OUT!” and smash into the Death Star trench wall asteroid. Above, both TIEs had finally gotten the upper hand and flanked Luke, but all my attack rolls were embarrassingly bad, like the linoleum. For some reason, although he had higher initiative, he was unable to put the TIEs into his field of fire. He was not able to shoot. 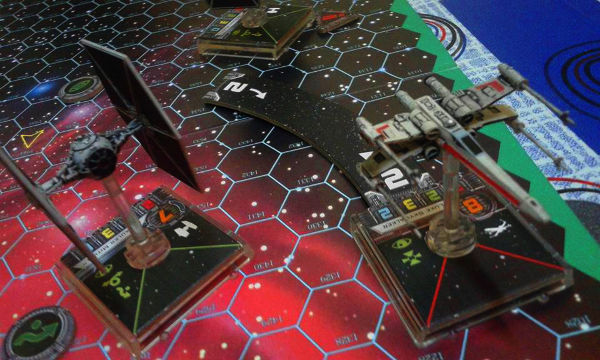 This allowed my TIEs to let loose with their green cannon bolts, which eventually hit a lucky break and depleted Luke’s Shield Points and some Hull Points. Ultimately, Luke and Mithel had the same damage result – one more damage would destroy either – but in the end it was Academy Pilot’s attack that took out the X-Wing.

The gameplay was quite enjoyable. I even used a soundboard for the relevant sound effects whenever we fire and things explode. We hope to play with more Upgrade Cards and maybe use the Millennium Falcon and the Slave One next time.