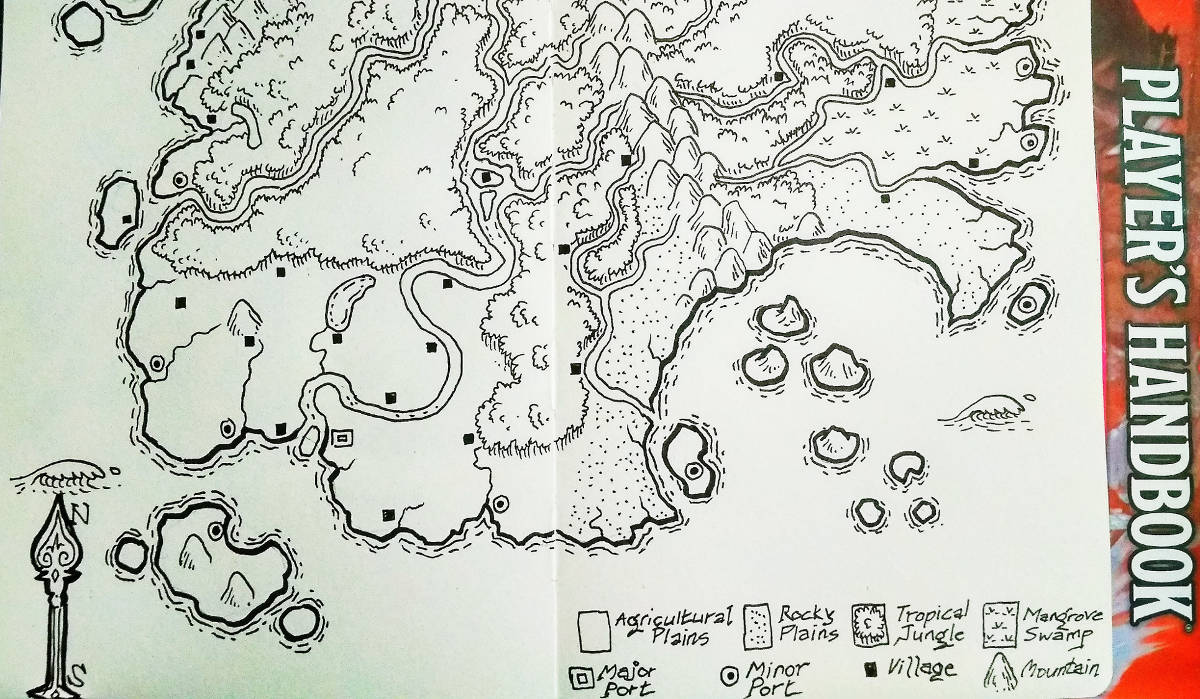 A quick cartography in the weekend

Finally after almost 30 years of gamemastering roleplaying games, I finally got to run Dungeons and Dragons.

Setting background: 130 years in the past, a fleet of jongs, perahus and lancang led by a Laksamana of the Sultanate of Melaka left their port for the Kingdom of China. As they approached the island of Temasik, a mist of green and purple descended upon them. They sailed in the mist for three days without the sun or blue sky. After the mist vanished, they found themselves in unknown waters. At night, the stars were different and the moon had a different face, and shone blue. The flotilla sent scouts north, south, east and west. The scouts discovered an archipelago to the east and led the fleet to an island that took them two days to sail around. The Laksamana decided on building an encampment at a river delta protected by a smaller island. While the people of the fleet formed a settlement, the Laksamana sent long-range scouts in their colossal jongs to look for other people. They returned a year later to no avail.

In the meantime the Laksamana had become a Sultan with a coterie of menteris to administrate the people of the fleet. The humans also discovered that they could somehow tap into the natural energy of the land and cast spectacular – and sometimes lethal – magical spells and enchantments.

Long story short, the humans met the bunian, etherial beings, who come from Kayangan, a realm only accessible through portals in a number of standing stones in the jungles of the island. The bunian traded with the humans and taught them to harness the natural magic of the land. The bunian also warned the humans of the momok, a subterranean people created by ancient dark power who disappeared even before the bunian discovered this land. When the momok attacked the first time, the humans began an age-old war with the untamed horde.

Meanwhile the humans’ Sultanate began building a city & villages, farming, mining and other activities to sustain themselves. They built newer ships and spread throughout the archipelago. An alliance between the Sultanate and the bunian, peppered by skirmishes with the momok, endured over the next 130 years.

But the land was not what it seemed…

Abduction at the Ancient Ruins 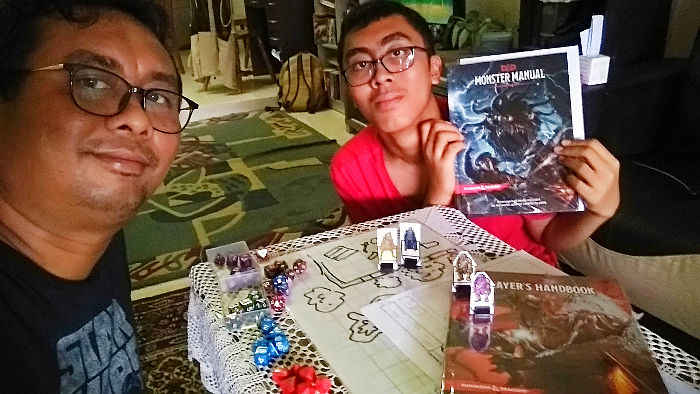 The Dungeon Master and Soran Itsuka at the table.

Soran Itsuka was a young fighter, formerly a pendekar of the land. His father and mother were originally of Japanese and South Caucasus blood respectively. He bore by his side a sundang longsword and a keris. He wandered the jungles between the kampungs in the lands far from the safety of the agricultural region of the Sultanate, craving for adventure and being paid to defend defenseless rakyat who live in the dangerous wilds.

It was late afternoon journeying on a path between two kampungs when he chanced upon a dead body under a banyan tree. The man died in a pool of his own blood, his chest filled with lembing stab injuries. He also determined (using Perception) that there were three assailants, and two other victims who were dragged off into the foliage. They were likely a mother and a young child.

Since it was in his nature, he dove into the greenery. He swung his sundang, hacking the paku pakis fronds and buluh perindu clusters out of his way. Suddenly he burst into a clearing. There was an ancient ruined building beside a huge petai tree; an old tower long crumbled into rubble except for its base. Soran thought that the ancient building had not been constructed by human hands, although it was swaddled by constricting ara, climbing duit-duit and ubiquitous paku pakis.

Soran thought he heard activity through the large hole in the middle of the tower base wall so he tried to sneak closer to learn more. (His Stealth roll result was 1.) But then he tripped as he crept up the pile of rubble toward the hole. He fell. Some gravel rolled down and hit a rock that fell and smashed into the base of a long dead coconut palm tree. It fell into the jungle foliage creating a loud noise and kicking up a cloud of leaves. 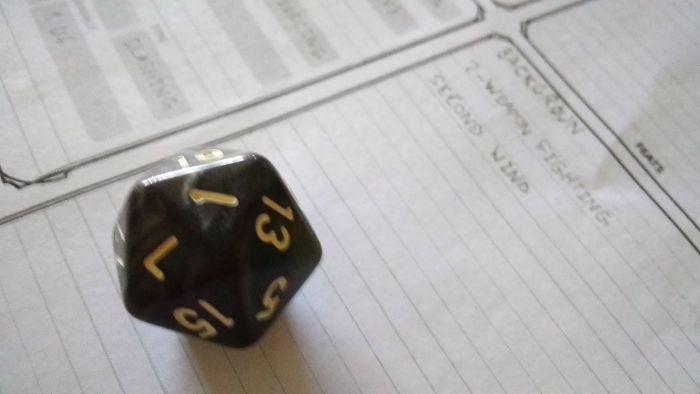 A 1 on a Stealth check can be rough

As the pendekar tumbled down the rubble mound, a red-eyed, long-haired and onyx-skinned creature with a lembing leapt out of the hole in the wall: a momok. He was clad in leather armour and metal helmet brandished a simple lembing, a long pole with a two-edged blade attached on top. He growled in a guttural voice, “A human! Catch it! Kill it!”

The momok rushed down towards Soran. Behind him another momok popped out from within the ruins. Soran had already stood up. His long keris was in his left hand and his sundang was in his right. However (thanks to a bad Initiative roll – momok 1, Irfan, then momok 2) the momok managed to strike first. The lembing‘s head sliced the fighter’s side, drawing blood. He winced from the sudden pain. (He lost 6 out of 12 HP.)

Soran’s keris lashed out and stabbed the momok‘s midsection (subtracting 10 out of 15 HP), spilling black blood onto the ground. However his sundang did not connect. 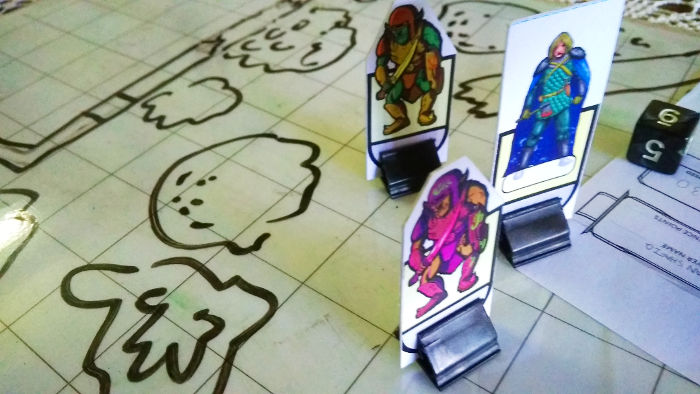 At the courtyard of the ancient ruins

The second momok was almost onto him when a voice rang across the clearing, “Hello! Look at me, you people! Stop fighting and listed to me! Look at me!” Just emerging from the clearing was a pale, tall and (Ain failed a Persuasion check.)

The second momok spat and screamed with rage, “A bunian! A bunian here?” He then jumped at the injured Soran with his spear over his head. However, the human fighter succeeded in twisting out of the way of the lembing. (I called for an Initiative reroll, with Ain, Irfan, followed by the two momoks.)

The bunian lady sprinted like a shadow towards the fray. She then made a fist, concentrated and threw a punch at the momok about to stab Soran. A bolt of pure flame lanced out from her fist towards the momok. The bolt struck the creature. It screamed even as the magical attack gouged out a section of his chest and half his torso was on fire.

Another javelin lunge at Soran missed but even after Soran’s keris stabbed the momok, he stood strong (though he only had 2 HP left). The bunian lady slipped between the two, aimed and loosed an arrow into the momok‘s head. The creature fell dead as flames engulfed him further. 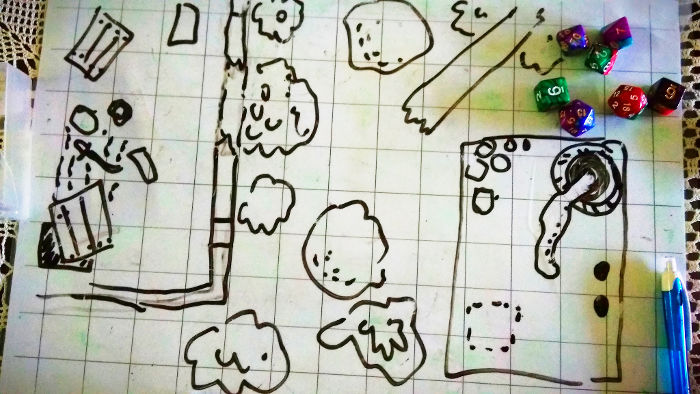 The ethereal newcomer introduced herself as Shamain, a bunian tanah – a race of bunian that refused to return to their home realm of Kayangan. Shamain was a ranger, a student of the jungle, who for some reason became lost and stumbled into Soran and the momoks. Soran invited her in his quest to rescue the abducted mother and her child. Although Shamain preferred to leave, she agreed to help Soran.

The sun was beginning to set.

They hiked up the rubble into the interior of the ruins and discovered a deserted momok encampment. There was a leather pack, some momok swords that resembled shamshir blades. There were old lumber all over the dirt floor. (Irfan succeeded in his Perception check.) Soran pulled away a lumber platform and discovered a hole beneath. Soran asked if Shamain had a torch, so she pulled one out of her pack and cast her cantrip to ignite it. The torch illuminated the chamber below.

The two human abductees were huddled in the corner. The mother was beside herself, sobbing over the death of her husband. Soran (with a successful Persuasion check) calmed the victims down and persuaded them that they were safe and needed come with them.

Shamain tied a rope from her pack to allow Soran to reach the floor 40 feet below them. He looked around with the torch. The cellar was bare except for another leather pack against the wall… and an ancient well built in one corner. Then with the daughter piggy-backing, he climbed back up.

While Soran took the child aside, Shamain slid down to help the mother.

It was then when a large tentacle emerged from the well and grabbed the mother. The woman screamed, “Help me!” Shamain cast another bolt of fire which burrowed a fiery hole into what looked like the tentacle’s midsection to her. But its grip on the woman remained. 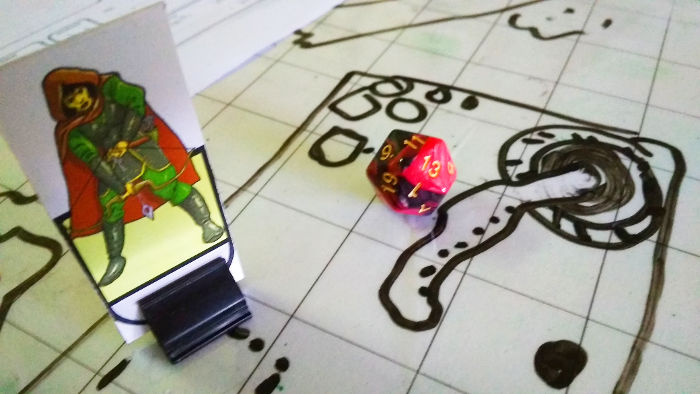 Even a magical bolt of fire failed to stop the tentacle

The tentacle withdrew into the well with the woman. Her screams echoed in her wake.