Christopher Mennell aka The Secret DM, commissioned me to create a host of otherworldly creatures for his fantasy setting of Issyka. It had been a while since I drew fantasy creatures. So I thought it would be a great for me to flex that cluster of creative muscle.

Long after the ancient Shapers have gone extinct, their bio-factory are still creating new creatures that continue to roam the wilds of Issyka. 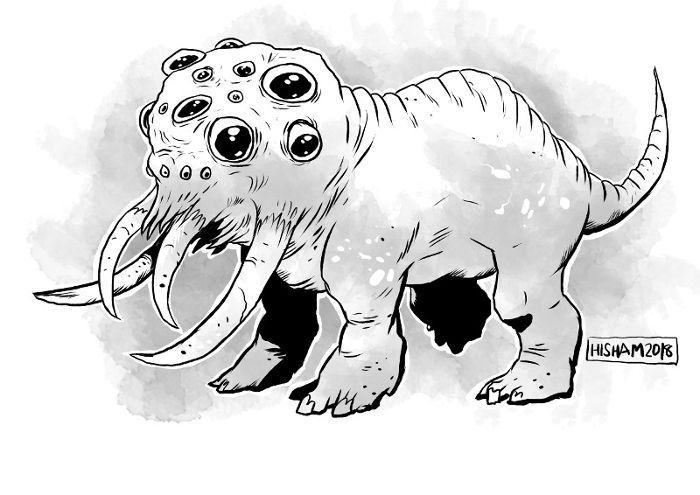 An adult zegak-zoti grow anywhere from three to thirty feet tall. This type of creature has an armoured hide which could turn the best arrows. The largest of these beasts could be made into a mobile fortress if they could be tamed. However, the problem many find is that zegak-zotis adore the taste of human flesh. 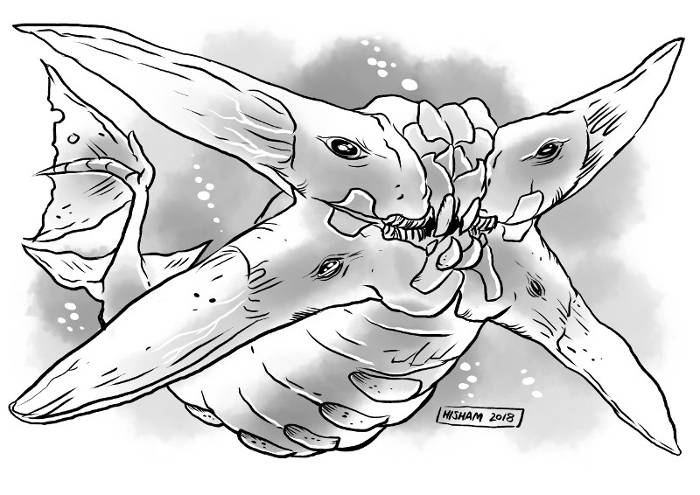 Sysakuunds are aquatic hunters that can grow up to fifty feet in length. They hunt prey using echolocation using its humming organs located under its belly. To deliver a coup-de-grace, these organs can also release enough sound energy to stun a human-sized prey. It takes a sysakuund up to ten minutes to store enough energy in its humming organs for such attacks. 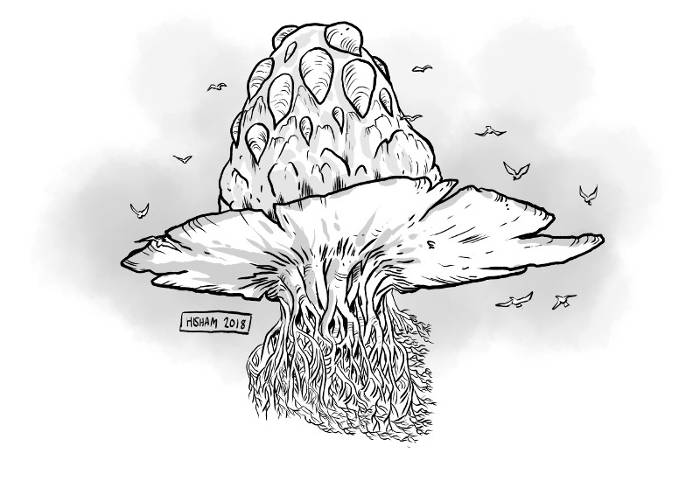 Monolithic and colossal, the utch-ta float in the skies of Issyka moving where the winds take it. The utch-ta is a gigantic fungus that float on internal floatation gases. The aeroponic roots beneath an utch-ta can be very prehensile and dexterous enough to grab birds that fly close to them and digest them within the root network. Because the largest utch-ta grow up to a thousand feet in diameter, smaller creatures – even humans – have been known to set up small outposts or settlements upon their plateau-fins. Some of these communities are peaceful and others are not. 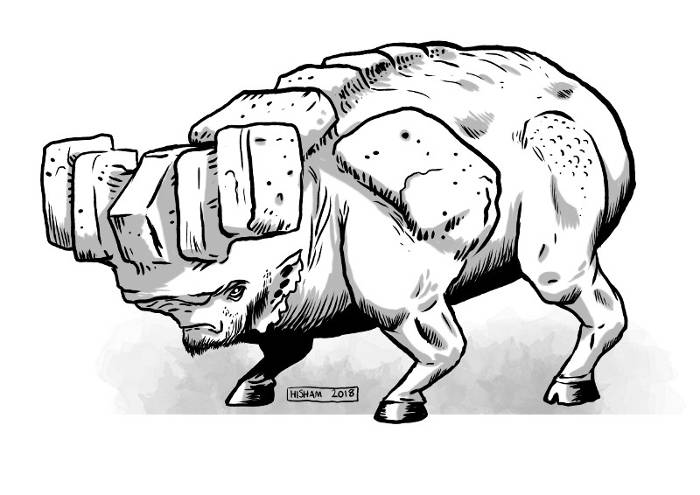 Thog-agond are bulky bovine creatures with meat that are extremely delicious for humans. Many human diners long for meals made from thog-agond meat. The problems of acquiring such meat are many. First, no human has ever successfully tamed a thog-agond. Secondly, thog-agonds are vicious. They attack by smashing their hammer-like head into whatever that threatens them. Thirdly, these creatures are fast. In fact, their speed is legendary. They could be on top of you in five seconds from quarter mile away if the ground between you is flat and stable. Finally, they are never found alone. Groups of up to ten human hunters have been found smashed and trampled to death by a herd of fifteen thog-agonds. 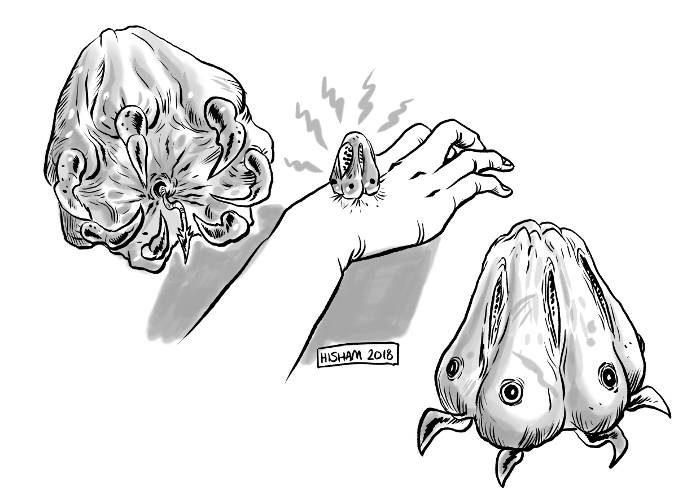 Qweasinks are insects that drop down from cave ceilings and trees onto their prey. Smaller than a human fist, a qweasink has seven ambulatory claws, seven eyes and six venom sacs. Each venom sac holds a different type of venom. Although there are only six sacs to a single qweasink, here is a partial list of known effects of qweasink bites. 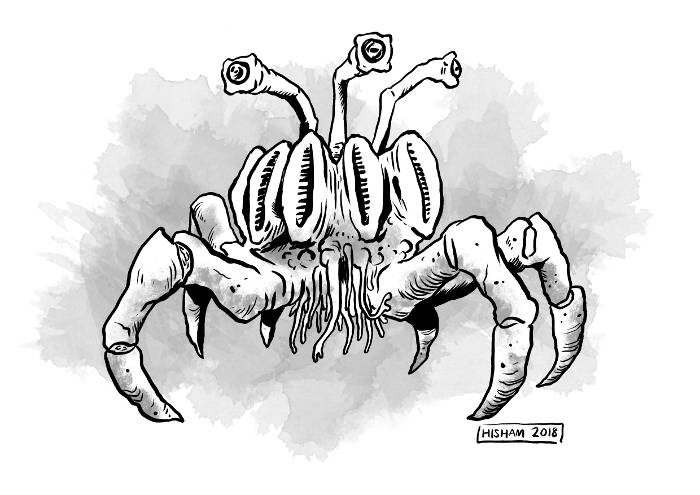 Wokawi is a nervous omnivorous dog-sized creature that hates being close to other non-wokawi creatures, which includes humans. If a wokawi notices an approaching creature at sixty feet, it starts honking. The closer the encroacher gets, the louder the honking becomes. At less than 10 feet, the honking of an adult wokawi can kill a human with the intensity of its honks. Putting a bag over a wokawi’s eye stalks have been known to allow humans to approach them without any ill effects. Some people have used wokawis as guard animals at night at their abodes. 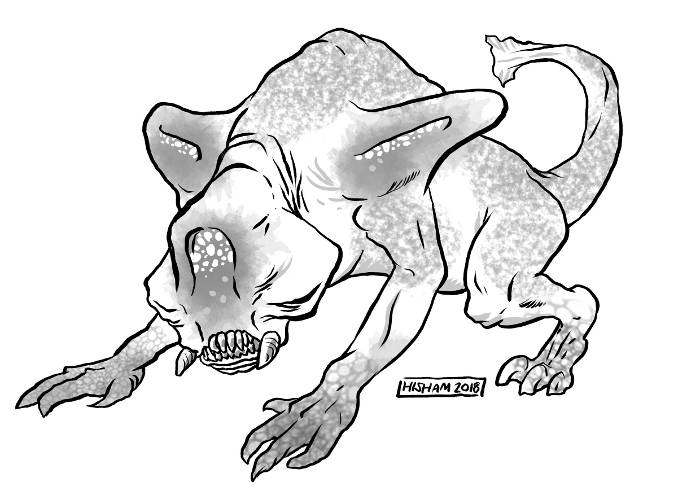 Chitkasus are bloodhound-like creatures that are totally blind. They track their prey using their shoulder and head airscoops. Not only do the airscoops are able to identify one out of a hundred smells in the air, but membranes in the scoop can also triangulate sources of the faintest of noises. Chitkasus can be trained to be a tracker although not as an attacker. The slightest threat to it will send it whimpering away in fear. 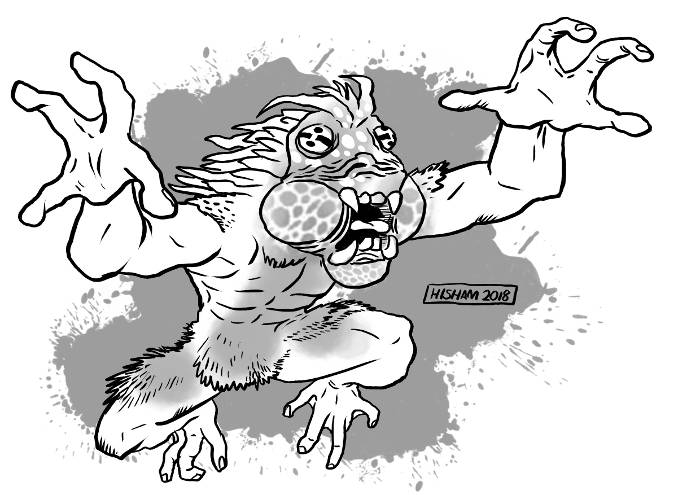 Jakawaris are primate-like animals which can grow half the size of humans. It can mimic any sound that it hears and have been known to use the ability to draw a human away from something it would like to steal. Jakawaris are for some reason attracted to small, shiny objects. Unfortunately, humans are a major source of small, shiny objects in Issyka. An adult jakawari is able to jump at an amazing range of fifty feet. A jakawari can also expectorate at anything that threatens it with a large spitball that could knock down a human and smells really gross. Ew. 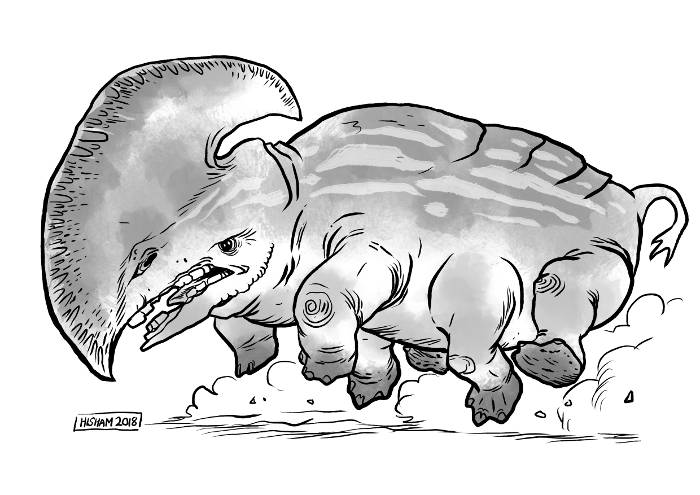 The humongous baladibal is an animal that will charge at anything that it deems a threat. Its head bone is shaped into a blade that could cut through tough metal armour. When a baladibal is charging, the ground shakes violently enough to throw people off their feet. The largest baladibals could be made into siege platforms. 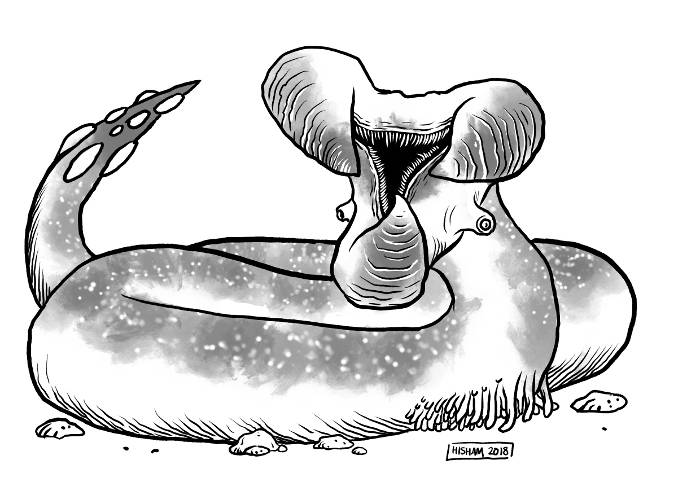 Vrisks are carnivorous snake-like creatures but have a mouth with three very powerful jaws. A vrisk senses its surroundings via faint vibrations using the cilia on its belly. Glowing organs at its tail emit an ultrasonic vibration, which causes humans to be wracked and immobilised by absolute terror. Some humans have acquired these fear organs, separated from the animals, and use them to their own advantage to induce fear in others. Some vrisks hunters have claimed to know how to neutralise this fields of absolute terror but are unwilling to give up their secret. Vrisks can grow up to 120 feet.