Irfan’s eighth birthday occurred when Alya, Vin and Sila were visiting at the Tenth Floor. I was happy they were around for the birthday bash, seeing that they don’t usually have a direct train or bus line from Ohio to come regularly. We ordered a cake that was in a shape of the number 8, because having a cake in the shape of the number 9 would make absolutely no sense. 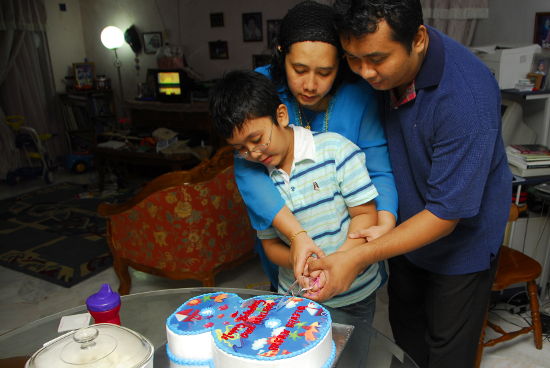 Moments after this photo was taken, Alya joined Irfan and they both held the knife together (under supervision) to further cut the cake. 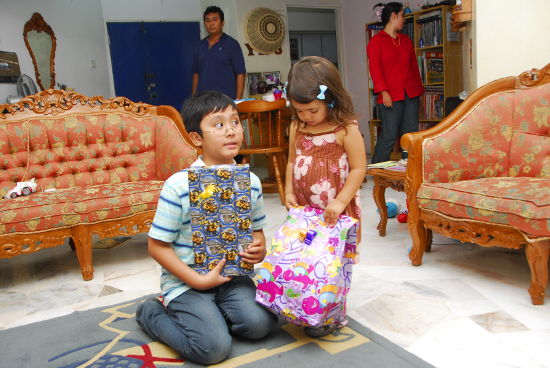 Irfan and Alya showed off their still-wrapped presents from Atok and Opah. 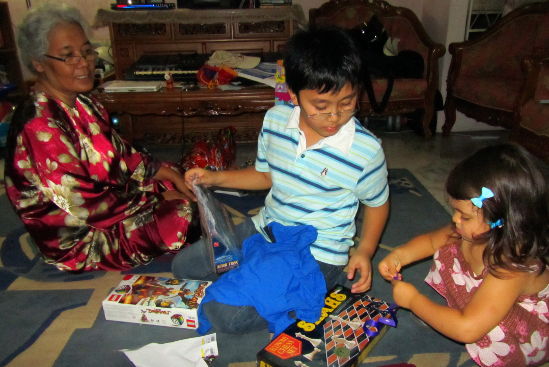 Irfan was really into unwrapping his presents, though he needed some adult help to take apart the wrappings and open the boxes. Alya played with the wrapping ribbons. 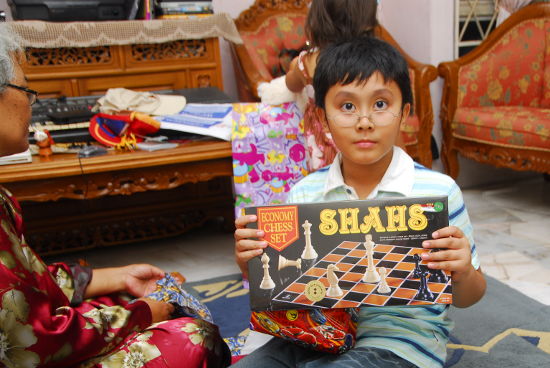 Atok and Opah got Irfan a chess set. What does Irfan have to say about chess? Click here to find out! 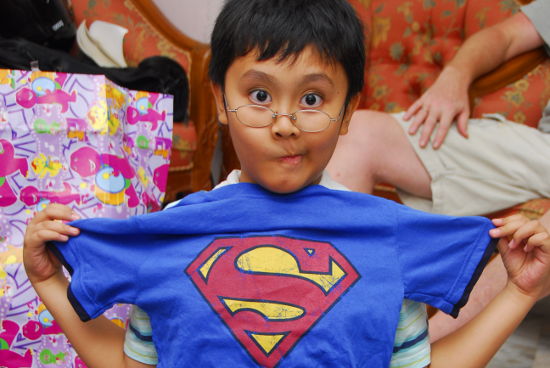 Irfan loved Vin’s present, which was this Superman T-shirt. He’s already worn it more than a few times since getting it. 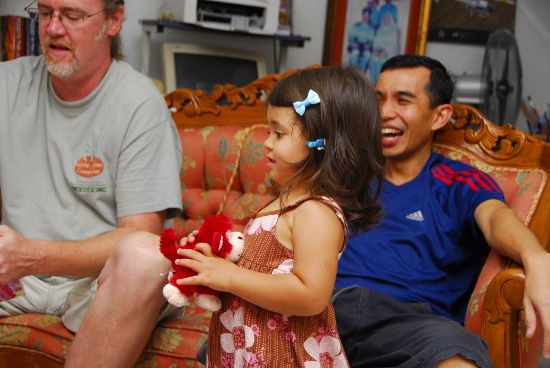 Sila’s ATU classmate Zarin also came for the birthday party. It had been awhile since they last met. He presented Vin and Sila with a framed print of a collage of Alya’s blog photos which looked spectacular, honestly! In the meantime, Alya played with the red monkey, which was her present from Uncle Zarin. 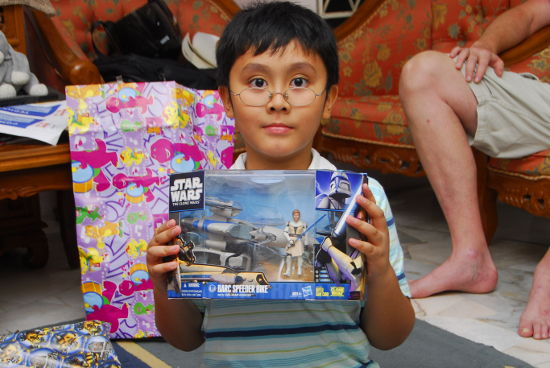 What did Uncle Zarin get Irfan for his birthday? A BARC Speeder with a sidecar! Irfan’s dad was as excited as he was at this present. Seriously, I’d never seen this sudden and this huge an influx of quality toys into the house before. 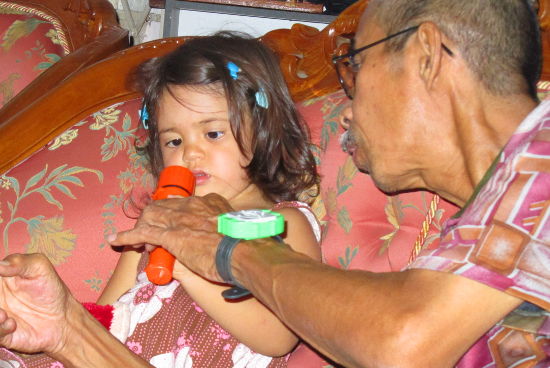 Alya, Atok and a torch

In the end, Alya found a flashlight to be as intriguing an item as any toy. So she went on to play with that throughout the night… and the following days. 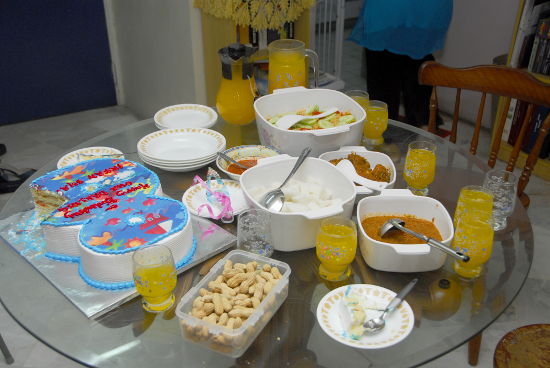 Ain made bihun goreng and nasi himpit. She hoped there was enough for everyone. Yes, they were enough. 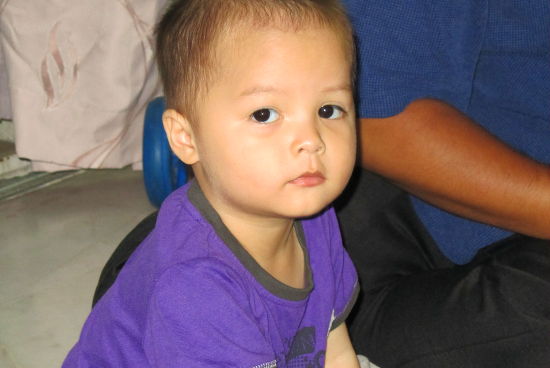 Irfan’s cousin Aiman and parents arrived. Alya tried to hug and kiss him, but he was shy and retreated. 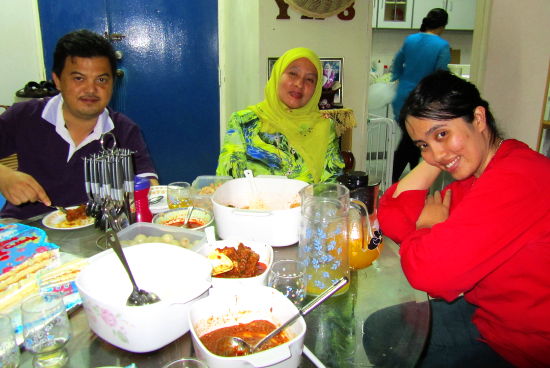 Abang Kie, Kak Nor and Emma discussed tactical deployment of the fleet as the newcomers ate nasi himpit. 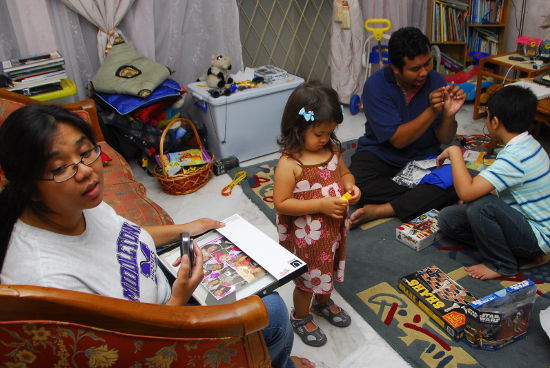 Sila, on the phone with someone, held on to Zarin’s gift as some kids played with toys. Even that one large ass kid over there in the blue shirt.