Yesterday, I was reunited with the old GOKL crew for a one-shot RPG session of Coriolis – The Third Horizon RPG. 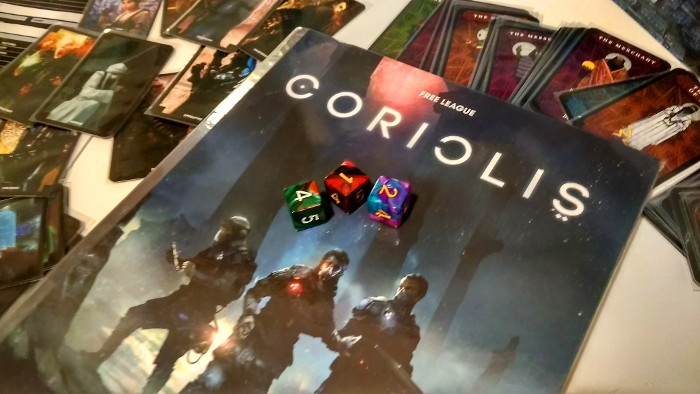 Coriolis is a game published by Modiphius Entertainment and uses the same system as Mutant: Year Zero and Tales from the Loop role-playing games.

Humanity has reached a star cluster known as the Third Horizon via a portal. But a Portal war has long isolated them from the rest of humanity. The Portal Builders are long gone and appear to be an ancient and powerful species. The space station Coriolis orbits the planet Kua, the hub of the Third Horizon.

Also of note is that the civilisation of the setting takes on the trappings of the Middle East. 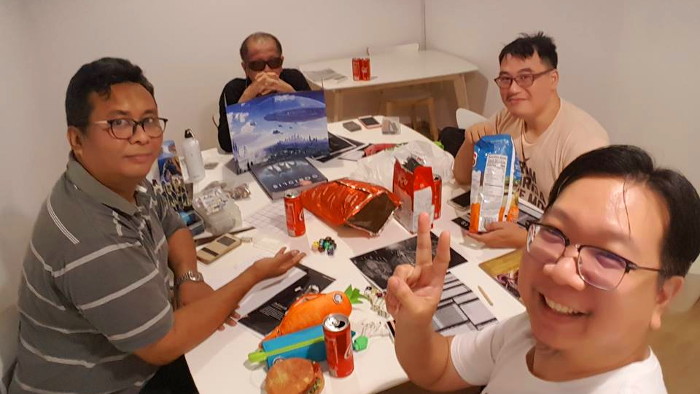 The system is pretty elegant in its simplicity. Roll a pool of dice equalling your character’s Attributes plus Skills. Any dice turn up 6 is a success. Multiple sixes on certain rolls (like attack rolls) will give your more benefits.

You know, I think I would like to give Tales From The Loop a go after playing this. 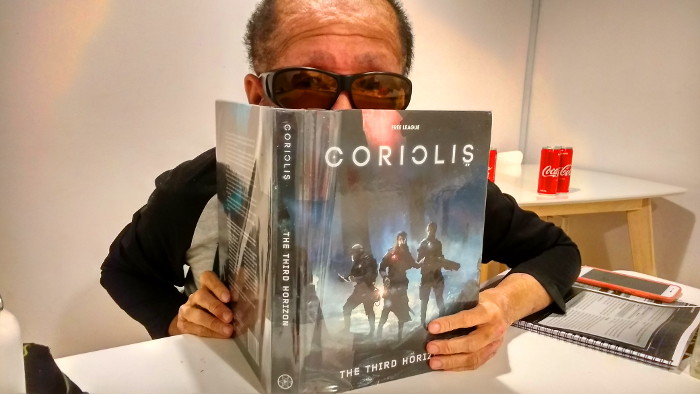 I am Rouya Ghallab from Kua. I was once a soldier for the Legion. But after seeing too many senseless deaths of comrades, I left. Now I am the gunner of the light freighter Narzalus. I have a new crew. I have new responsibilities. I hope they do not die. Usually they do.

We are travelling through the Dabaran system. A Foundation agent offered us 10,000 birr to search for one Professor Siyab Dahiljaba who disappeared along with the ship he leased, the Shamza.

50 metres in length, the Narzalus was made at the Cheleb shipyards. I could wax lyrical about it if I wanted to. Today, though, I really love its arboretum. It gives me the isolation and silence for me to contemplate all the fallen sisters and brothers I had in the Legion. Some I could have saved. Most I could not. Their deaths are seared into whatever fleshy section of my brain that retains memory. I thought leaving the Legion would make me forget. But no. It appears as if that the waking nightmares are worsening. Death. Suffering. Despair.

In the Narzalus arboretum, surrounded by vegetation, I open my mouth and put the barrel of my Legionnaire carbine into it. I thumb its safety off.

Dr. Armita Wana‘s voice suddenly boom across the ship. Sensors register an old, derelict station and we have been ordered to investigate. And a ship that matched the Shamza is docked to it.

I put my gun away. Who knows what would happen to the others I was dead and could not join the boarding party.
I arrive on the bridge the same time as Zebo Hutul who is encased in his perpetual fog of arrash smoke. I think the machinist talks too much, but he means well. Our pilot Nima Dol-Soufi is already at her station. She blames herself too hard for the death of her fellow pilots. I should be able to counsel her about this, but not yet.

Dr. Wana is trying her best to look captain-like at her station, but is failing. She looks like an archaeologist trying to exude the air of an entrepreneur who is unsure of how to look like a ship’s captain. I complain not, though. She keeps the ship flying somehow and us fed.

The station and the ship docked onto one of its four airlocks are cold and unpowered. According to the database it used to be the The Royal Dabaran Institute for Astronic Research Station No 18. It was reported lost just over a century ago during the Portal Wars.

Before going on an excursion, we head to the Narzalus‘ temple to pray to our Icons. I usually pray to the Judge. I do not remember to what Icons the others pray to. I thought I should also sacrifice something to the Judge. I search for any camels or zebras or perhaps – even better – a giraffe in stasis in the cargo compartment to sacrifice. I fail. So I prep for boarding. I later hear the others’ prayer sessions to their icon had been inspirational, worthy of a training montage and spirit-lifting mood music. 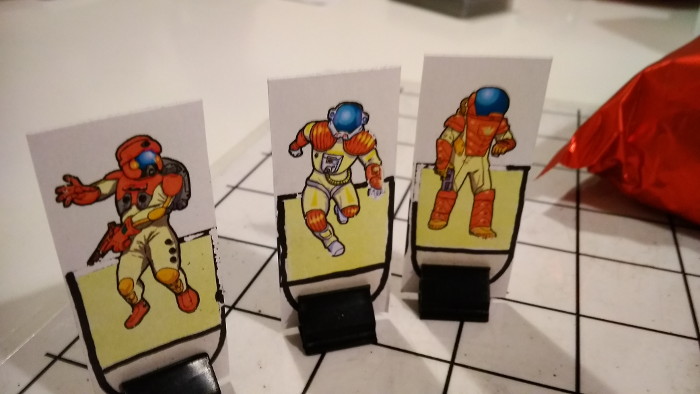 Too soon, we are all in our exo shells, standing on the hull of the Narzalus. On the bridge, Dr. Wana pilots the Narzalus to manoeuvre in a stationary orbit around the spinning station. The Shamza is perched onto one of four docking airlocks.

They consider jumping over together, but if Nima or Zebo gets lost in space it would be up to me to delete their browser history and cache. I hate doing that. So I volunteer to jump across with a spool of hyper rope that Zebo carries.

I jump. I do not jump well. I slam into the hull of the station and spend 15 seconds cursing under my breath. It hurts. Then I slowly signal a thumbs up.

As I attach the hyper rope, I notice that my left arm had touched a black goo that appear to be growing out of the hull of the station.

The others soon arrive and we climb into the Shamza‘s airlock from the outside. The Shamza we discover is totally devoid of power. According to our exo shells, Shamza air is breathable, but we have seen enough space horror vids not to crack open our helmets and take a sniff.

The others are attempting to pull the Shamza‘s logs from a console at the bridge when I notice something odd.

The station is rotating. The Shamza is docked to it. Every rotational cycle, we are exposed to the local primary. The sunlight stream in through the windows. When the sunlight shines upon my left arm, the black goo seems to move, undulating and stretching as if it is alive.

I mention this to the others. They consider shooting me just in case. I wish I had better friends.

Zebo instead move on to open the airlock leading to Station 18. I cover him with my accursed carbine. The door swings open and I sweep forward. Zebo and Nima form up behind me.

Stalking the dark, powerless corridors of Station 18, we decide to pay a visit to the reactor room. There is wisdom in restoring power to the station. 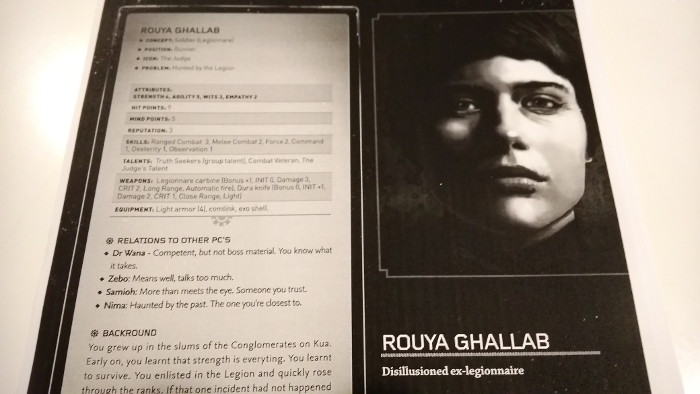 In another life she might be Ru’yah or even Rokiah.

I cover their backs as they work on an engineering console. They are still working on the console fruitlessly nearly an hour later when I see movement. I shine my lights at the shadows behind the pipes and cabling of the reactor room. There is a figure there. It looks human, with dark eyes and a shaved head.

I call the others to attention and the figure bolted. It is quick on its feet behind the pipes and machineries. But Nima is quick too. She is almost upon it, I think – I could not really see bringing up the rear, but it turns and pounces upon the pilot. I squeeze my trigger and the carbine took a huge chunk of flesh off the creature’s head.
It reels but it still stands. It is about to attack Nima again when Zebo sweeps in. His massive power sledge strikes the thing’s head. It caves in. If fact its entire turns into a smear on the wall. The smear on the wall reminds me of the black goo on my arm. By the way the others are looking at me, it reminds them of it too.

We then found our way to the medbay. There is evidence of some sort of a fight. But was it recently or a hundred years ago during the Portal Wars?

There is power at one of the static pods. We found Professor Dahiljaba still alive inside. As the others revive the doddering old fool, I test my luck and look at the other stasis pods. As expected, my luck sucks eggs as I find no zebras or giraffes in them.

After regaining his senses, the Professor tells us a story of a dark flower. Upon reading the text of Suleiman the scholar, the Emir of Yehenna on Dabaran began to yearn for the Flower of Heaven. The station was constructed a century ago as part of an effort to locate the flower. The flower was found on Salamanx. Dr. Wahina was in charge of the search. Then the Portal Wars happened. During a battle, Dr. Wahina injected themselves with the plant’s biomatter. Then station, she and all those aboard were lost.

Until the Shamza stumbled across it. 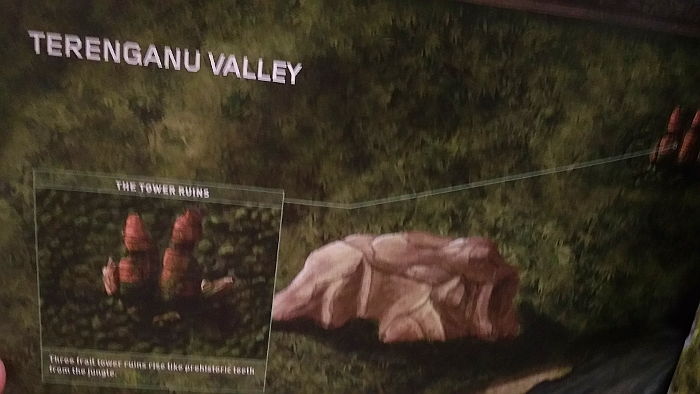 Did I not work here once upon a time?

A voice booms across the station. I point my weapon everywhere uselessly. The female voice identifies herself as Dr. Wahina. Would she not be over 100 years old? She wants to spread the seed of the Dark Flower across the Third Horizon. No, thanks. I have seen what happened to those exposed to its biomass. I flex my contaminated shell arm subconsciously.

We decide to get the hell out of Station 18.

We are blocked before we reach the airlock. Not Dr. Wahina. It is Amirah Tasch, Professor Dahiljaba’s security officer. The professor’s glee at seeing her alive is swiftly eclipsed by his horror at seeing her corrupted visage. She appears to have been infected. A Legionnaire sister, Amirah was still fighting the Flower’s influence. Unfortunately for us, she is fighting to prevent us from leaving the station. She is willing to nuke the station so the infection would not spread.

Nima’s Vulcan pistol and my carbine are marginally effective against these… growths. The avatars of the flower. I see a miracle. Zebo prays to his Icon and his Icon whatever it was answered. The machinist, though arrash-addled, swings his power sledge and wipes the deck with Amirah. More senseless deaths, but I have to ensure the safety of my team. In any case, we turn and flee without looking behind.

We find an exo shell for Dahiljaba and return to the Narzalus. I eject out of my exo shell carefully and jettison it out the airlock moments before the Narzalus‘ engines fire. I expect Station 18 to explode behind us, but it does not. We ferry the professor away to safety

We earn our pay, a clean 10,000 birr. But the experience rattle us. Well, most of us thanks to the effects of arrash. There is more, I have learnt, hidden within the shadows among the worlds of the Third Horizon, away from the bright sheen of Coriolis and the marble columns of Kua. There are unknown things that could be the absolute destruction of our civilisation. When we look for Station 18 again, weeks later, we find it missing. There are no visible after-effects of a nuclear explosion.

Some time later, there are rumours of dark flowers appearing out of nowhere, growing on the arid fields of Dabaran.

So what do we do?

Nothing we can do. The Foundation and the Legion has more eyes, ears and fists across the Third Horizon than we do. What we can do is we keep flying. We learn. We keep an eye out on the Horizon.

If required, we duck.