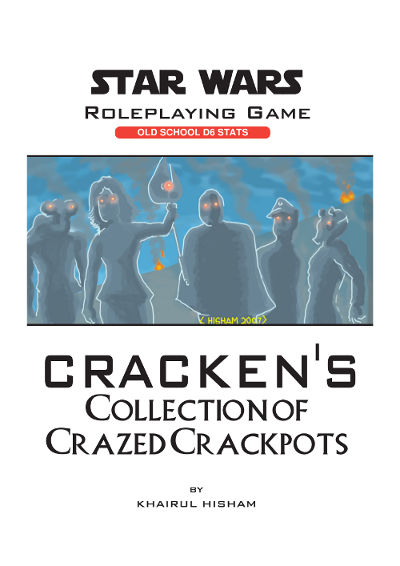 In the tradition of West End Games’ series of sourcebooks such as Cracken’s Rebel Field Guide, Cracken’s Rebel Operatives and Cracken’s Threat Dossier (all of which are books written in-universe by the fictional General Airen Cracken), I now bring you the non-official mini-sourcebook pdf for the Star Wars Roleplaying Game (D6 rules version)…

It’s created 100% by open source software. The artwork was made with The Gimp, the layouts were done in Scribus, and some elements were saved in EPS and ported from Inkscape. And it’s compressed into a zip file by Ubuntu’s onboard archiver.

It’s basically a book about some dangerous escapees from a nuthouse for the criminally insane. Stats are included for D6 roleplaying goodness. Take it seriously at your own risk… and sanity. Apologies for not having the time to create a back page.

Oh, and Airen Cracken doesn’t really appear until the end.