We began a new campaign on Discord and Foundry VTT. This time it’s Delta Green, gamemastered by Ivan.

Delta Green is a game of conspiracy of Lovecraftian proportions set in the modern age, and published by  Arc Dream Publishing. It uses a variation of Chaosium’s Basic Roleplaying  System for Call of Cthulhu. This was the second time I played it. The adventure was played over two nights and my title for it is obviously not what it really is. 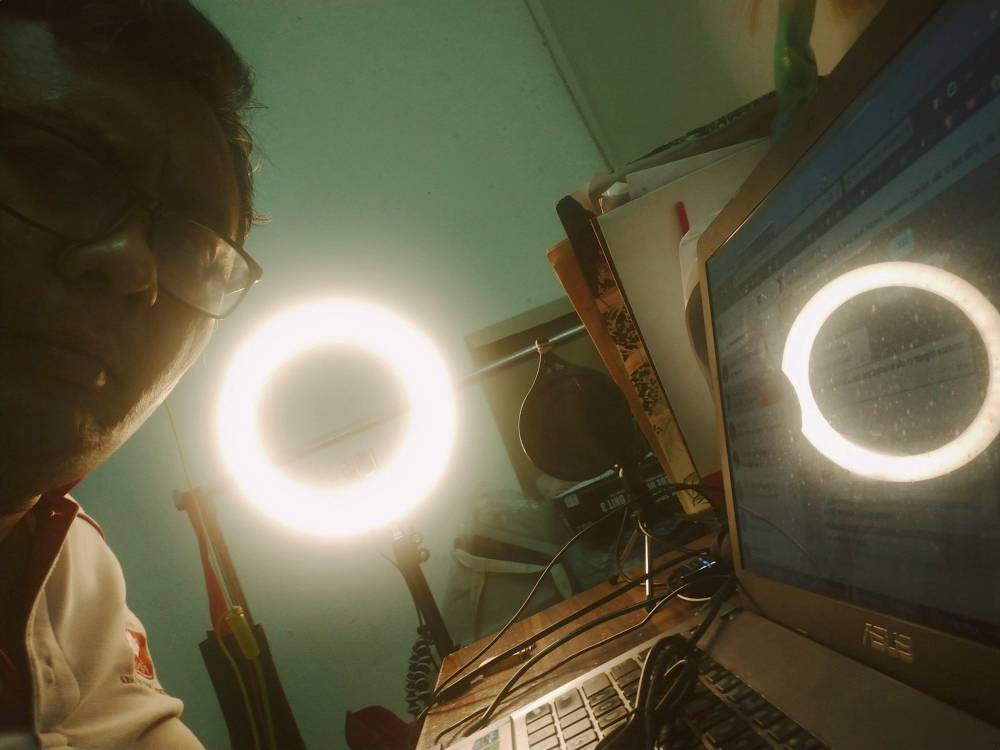 My name is Sale. Caleb Sale. I used to be a mechanic, an Airman First Class for the United States Air Force. My speciality was rotorcraft maintenance, specifically the V-22 Osprey. One day, I saw something strange that changed my view on life and how the universe worked. I weathered it, then left the USAF to work in the civilian sector.

However, the strangeness would follow me in the form of Delta Green recruitment. And I agreed to join.

01 Last One Out, Get the Lights

The DG case officer, Agent Darryl, assembles us in a room above the Nando’s across from the Department of Homeland Security office in Chicago. Besides me, there is a red-headed, foul-mouthed Scottish woman named Gloria Palmer, a CIA operative named Sean Mueller who was seconded to the State Department and a computer hacker named Jim Kurtz.

Agent Darryl tells us that an illegal drug known as Reverb is proliferating in Chicago’s night clubs, distributed by a syndicate of Asian-looking, diminutive people, known as the Tcho-Tcho, which appears to be part of the South East Asian immigrants. Our mission is to determine the source of the narcotic and stop its flow into the city.

After the briefing Palmer and Sale buy peri-peri chicken from Nando’s because it was closed earlier when they arrived. She takes the chicken and I claim the peri-peri sauce.

The team discover a paper by Henrietta Cole, an anthropologist at the University of Chicago about the “Chauchua Diaspora”. Many condemned it as a racist paper. Requiring more information, they try calling the Department of Anthropology there, but it appears Dr Cole is on an expedition in Myanmar.

The team sets up a command centre at a no-name hotel. Kurtz and I stay for to requisition and set up our gear while Mueller & Palmer visit a local police precinct.

They meet Sgt. Taslim. Mueller uses his State Dept credentials to open doors and gain information. Taslim tells them that the usual dealers have gone missing, but they had arrested a small-time drug dealer Rufus LaRoyal Brown aka “Roofie“.

They interrogate a recently arrested small-time drug dealer Rufus Brown aka “Roofie” but he has no clue about Tcho-Tchos. Eventually Palmer harangues Roofie hard enough to get him to name his supplier: Spider Jay.

Sgt Taslim has heard of Spider Jay, but by not much. 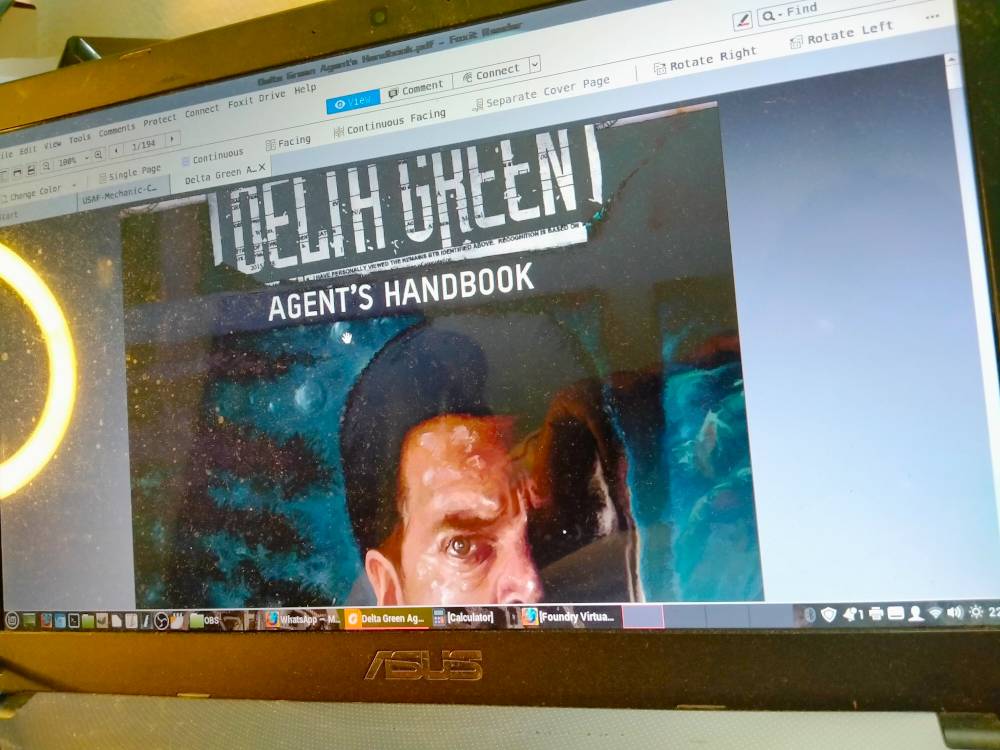 03 Every Day a Little Death

Meanwhile Kurtz and I requisitions equipment from Agent Darryl: a tacnet gear for 4, a directional microphone, a camera with telephoto lens, Beretta M9 sidearms, GPS trackers, a drone with night vision and a mobile command base, i.e., a truck with IT and comms gear. We are only sent the first four items on the list.

When Mueller returns, he hits Radio Shack for off-the-shelf devices. The GPS tracking devices can be located using smart phone apps. Presumably, Kurtz encrypts our phones and apps, but I did not see it. We each carry a device in our pockets so we could track each other’s location in case we get separated.

Kurtz is also unable to use his SIGINT skills to uncover more about Tcho-Tcho, Reverb and Spider Jay using his personal gear.

When the sun hides behind the Chicago skyscrapers, Sgt Taslim calls Mueller. She is beyond shaken: Roofie is missing from his locked holding cell. There are deep gouges in and blood splatter painted on the walls of the jail. No one entered or left the cell. The gouges are as if talons of steel had made them. The blood seemed to be Roofie’s and such massive blood loss would mean the prisoner, wherever he is, is now dead.

Intel from Darryl arrives: Spider Jay is Jacob Silas Simmons, 32, ex-US Army, ex-Blackwater. Court-martialled in Afghanistan, but acquitted & honourably discharged. He has since returned to Chicago.

At nightfall, the team head for Chinatown where Roofie was picked up by cops earlier. Palmer is trained and knows to look for Tcho-Tcho iconography, which might be known locally as gang signs.

The evening has just begun. In Chinatown, Kurtz and Palmer enter a bar named Uncle Ho‘s and approach the young female bartender. However, because of Kurtz direct questioning, the woman claims to know nothing of any crime gangs nor of any narcotics named Reverb.

I cover them from afar, trying to spot anything out of the ordinary. But I must be really exhausted, because I see jack squat.

Soon after, I leave first to rendezvous with Mueller outside, then the others leave. We decide to check out the nearby alleys. 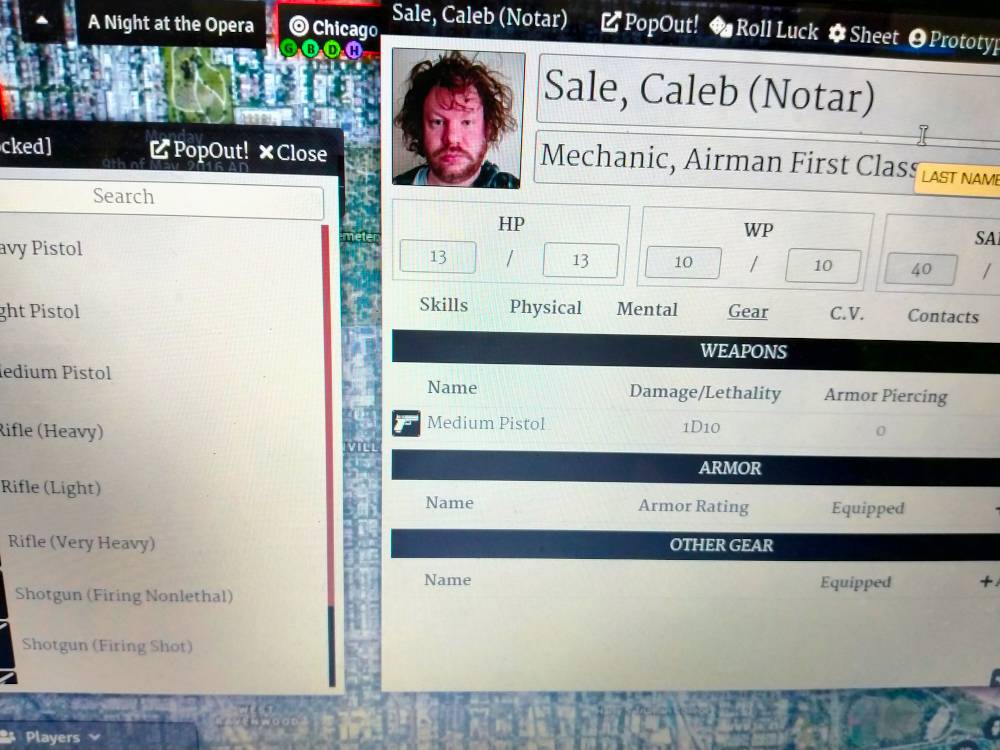 Soon after, Palmer spots a Tcho-Tcho sign on an alley wall. We look around for other clue, but spot none.

Kurtz puts the squeeze on some homeless people. The men there gives Kurtz the runaround as – like in the bar – he asks questions too directly and sounds too much like a cop.

Away from the others, I see a corner dealer and approach him with my hoodie up. I am able to score a packet of Reverb from him.

When I inform the team of this, Mueller comes up with a plan. He pretends to be a rich, well-dressed party-goer and cleans out the dealer, buying up all his Reverb supply for a party tonight; money is no issue. His supply depleted, the dealer sends his runner to re-up his supply. On a bicycle.

I  follows him on another bicycle that someone forgot to lock in front of a Chinese restaurant.

The runner cycled four blocks to the Hotel Excelsior. I keep the team apprised of the situation by tacnet. When the runner disappeared through the hotel doors, Mueller advises me to ditch my hoodie and shadow him. Checking out the lobby, I note  that the runner went up the stairs to the 3rd floor. Soon, I hear his footsteps reverberate throughout the hotel, followed by loud banging on a door.

I shadow him and discover that it was our person of interest Spider Jay’s room. He spent 15 minutes banging on the door and then when there is no answer he left.

The team arrives and I go back to replace the bicycle. Kurtz and Palmer head to the dumpster at the side street under Spider Jay’s window works and find a broken laptop under Jay’s window. But then he hurt his ankle trying to grab fire escape ladder to get to a surveillance position across the alley from the room. Soon Mueller books an adjacent hotel room to work in.

I hoofed back to the Excelsior, but instead takes the overwatch duty on the roof, climbing up the fire escape ladder. I get comfortable, drawing my sidearm, but Jay’s drapes obstruct the view thrown the window. Mueller & Palmer, acting as pimp and prostitute managed to finagle the key to Jay’s room from the front desk.

They enter Jay’s room and draw the drapes open so I have a good view of the room. Jay was lying down on the floor, high as a kite, mumbling incoherently. Why did he consume his own supply? He groggily says that a lady got him to use it. 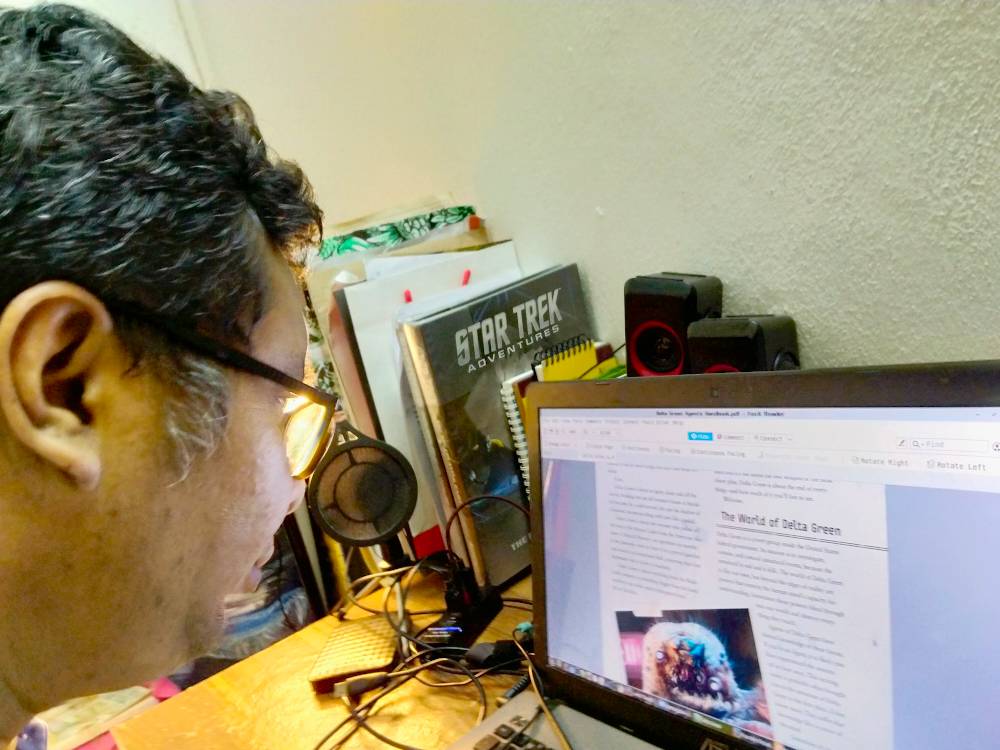 As Palmer kneels to study Spider Jay, she is wracked with an impossible vision of something unnatural.

A lake in Fairfield, Vermont? A SWAT team? A cabin with a mailbox named Camp? A Mesoamerican temple bathed in blood? A group of of humans (are they though?) crossing a punishing ice field? A man in reptilian skins and eyes, wearing an elaborate robe, surrounded by ancient scientific equipment ? A dinosaur, outside through the window? The vision ends.

Meanwhile, Kurtz is waiting outside the hotel security room figuring out how to get the security videos.

No one foresees what happens next. A portal of swirling effulgent energy and gas appears out of nowhere, and out spews a creature the size and shape of a large hound. Except that it seems to be made out of sharp, glass-like shards. It begins attacking Jay, with Palmer beside him. Mueller, who seems to be the most grounded of the team, somehow loses his sanity and succumbs to the fight, in “fight or flight”.

At first Mueller attacks the beast to no avail, wasting his ammunition. Then he also tries to electrocute the beast with a table lamp, but fails.

Hearing the gunfire and guttural inhuman roars, Kurtz runs back to the 3rd floor. Upon seeing the preternatural creature and tries to wrestle it down. He begins to bleed profusely, thanks to its hundreds of shards of blade-like glass that encapsulates the creature.

I film everything with my phone (as suggested by Dan, out-of-character).

On the line with Agent Darryl, I try shooting at the creature through the window. Discovering the futility of this, I climb down and run back to the hotel. I pull the fire alarm and convince the desk clerk to begin evacuating the hotel. Jay dies eviscerated by the creature. Palmer, her arms slashed with vicious cuts, tries twice to pull her team mates away. She fails and  withdraws from Jay’s room.

07 Objects are Closer Than They Appear

We both regroup in the lobby as the seedy clientele of the hotel run out of the hotel in various states of undress. I quickly grab security video in the confusion.

Then there is an unusual sound; the sound of an unearthly implosion. It sounds loud and absolute. The inhuman growls and screams cease suddenly.

Delta Green cleaners arrive to sanitise the hotel in the guise of the fire department but there is no sign of Jay, Mueller or Kurt, just like Roofie in his jail cell. There is lots of blood, but no bodies. Nor is there any sign of the tenebrous hound-like creature.

As medics fix up the blood-soaked Palmer, I attempt to locate our missing teammates using our trackers. The phone app did not register their GPS locations at all, as if they are nowhere in the world.

08 Songs from the Cuckoo Birds

The official story released is a deadly exploded meth lab in the hotel. The team never even got to meet any Tcho-Tcho. But we seem to have stopped the flow of Reverb into the city.

At the debriefing later we see the woman Jay spoke of in the hotel security video. There is no records of this woman at all as if she never existed. It unnerves me greatly (as I failed a SAN Check and lose 1 Sanity Point).

I wonder if we will ever see Mueller and Kurtz again…