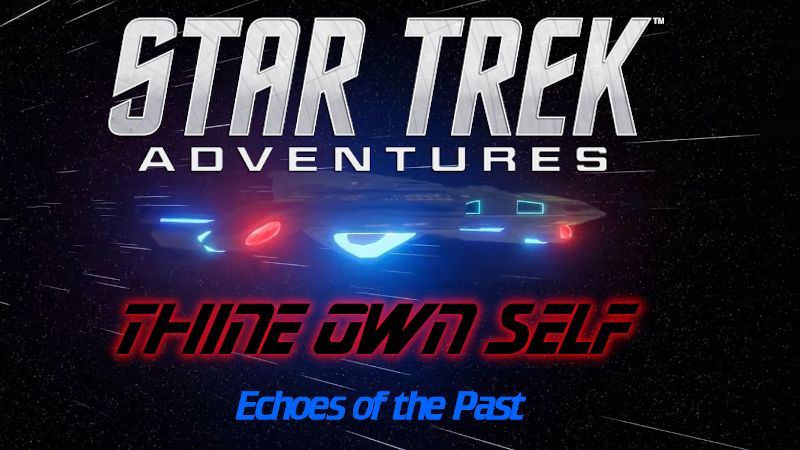 Echoes of the Past title card

Last time on Star Trek Adventures: Thine Own Self

Previously, as the Saber-class USS Sienkiewicz under Captain Vosgal Toor investigated the missing New Orleans-class USS Nairobi in the Melpomene Sector, Cardassian engineer Lt JG Kodar Tamat, Human engineer Lt. Simon Cañete and Vulcan pilot Ensign Sparik travel to Delta Melpomene V on the Danube-class runabout USS Moonstar where they discover that the archaeologists the Nairobi had picked up had taken with them a huge pillar that might have been made of time crystal. The Moonstar then warps to nearby Balateen to rendezvous with the Sienkiewicz.

Out of the Shadows

The Moonstar dropped out of warp in the orbit of the gas giant Balateen. Alert klaxons began to blare on at Cañete’s tactical station. Lt. Sparik asked, “What is it?”

“Trouble, Simon?” Tamat asked, approaching Cañete’s station. The display board came alive. It showed debris and Starfleet EV suit transponders adrift in space. There was a Danube-class runabout tumbling without power at 7000 kph towards the atmosphere of Balateen with a single life sign aboard. Cañete reported, “A runabout will crash into the planet, there’s one lifesign aboard! We need to transport them in here!”

Tamat said, “I’m on it! How’s their descent rate? Can we get any closer?” 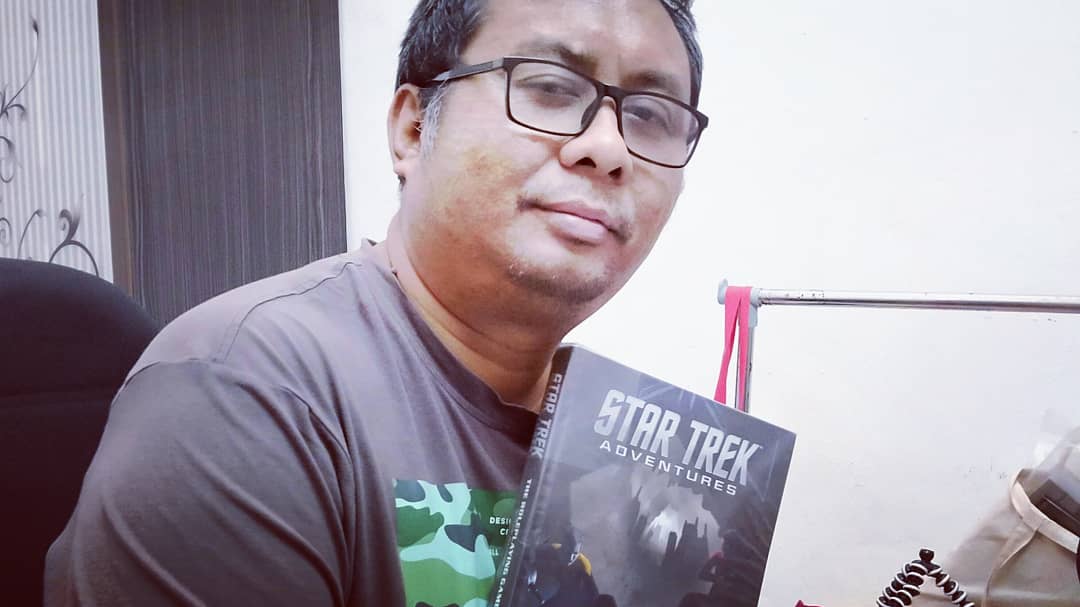 The GM up to no good

“Yes, but I don’t know how much longer the ship integrity will hold,” said Sparik. Then with a raised eyebrow, he said, “Something gave it a… hard push.”

“Diverting all available power to impulse, turn off our shields and weapons, reserve power for the transporter. Push it, Sparik.”

The Moonstar chased after the spinning runabout, its impulse engines flaring as bright as it could. They were two grey dots against an unimaginably enormous, seemingly-flat plateau of clouds. The stars were behind them, a wall of clouds in front. It took some effort for the Vulcan pilot to fly into transport lock range. But the ionising radiation of the upper atmosphere of Balateen was not accommodating. Tamat growled, “I’m having a little problem with the lock!”

Meanwhile, aboard the Segura, Jora Mungar was losing consciousness. (He lost 3 Stresses upon failing a Fitness+Security roll.)

“I think I’ve got it this time around, just need to reconfigure the annular confinement beam,” Tamat said. “Here it goes.”

Mungar felt the transporter beam wipe his body. The beam converted each quantum particle in and upon his body into energy.  Half a second later, The Trill rematerialised on the Moonstar‘s transporter pad. Sparik pulled up and away from the gas giant, then the Segura exploded into a cloud of fiery debris.

“That was a hell of a ride,” he sighed in relief. “Thanks, guys. Oh no! Commander Rajakumar and Mr. Marwan!”

However, Cañete reported that there was no other signal or life signs within sensor range in the immediate vicinity.  Mungar told them, “They were out in space trying to fix the satellite.” Then he gave an account of what happened to the Segura. 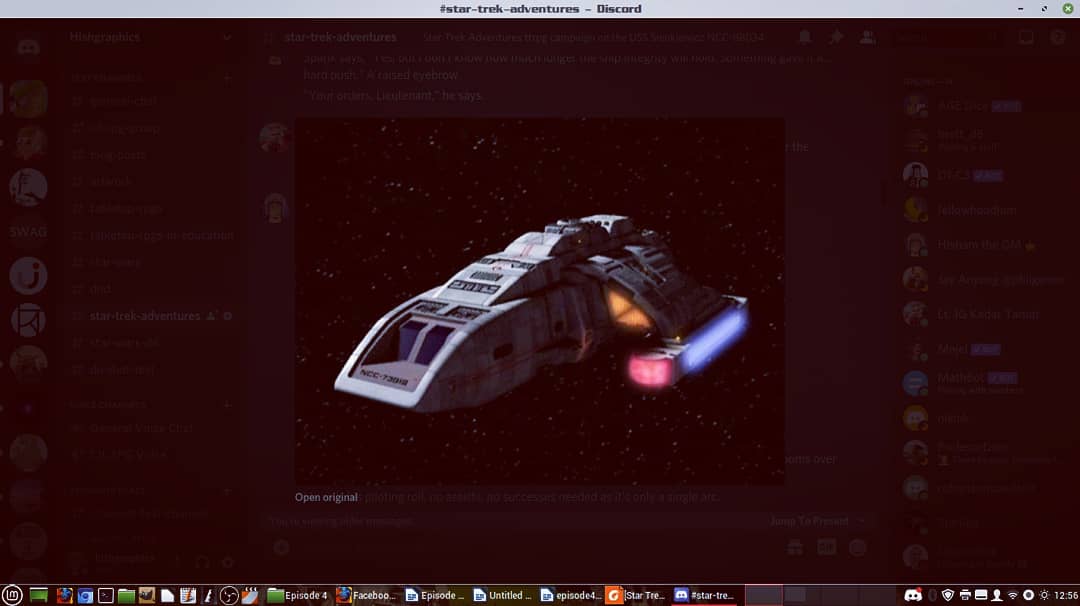 “What is our next move, sir?” Sparik asked Tamat. “Do we look for the Sienkiewicz at the New Inverness moon, or should we look around for survivors some more?”

“20,000 km with no life signs, that’s a disaster,” said Tamat, as he used the short range sensors to look for survivors adrift.

“Let’s try to find them if they’re still around,” Cañete said. “Let’s see if I can boost the sensors.”

The crew spent 15 minutes in a search grid with a full sensor sweep and found nothing. Also, there was no sign of the reported invisible tentacle that Mungar reported. In the meantime New Inverness was coming out from behind the shadow of Balateen. With the comms array down, contact with it had been lost until there would be line-of-sight contact with them.

Mungar suggested, “We should try a tetryon beam emission to see the tentacle.” Cañete quickly modified the sensors to suit.

Strangers in the Night

“Commander, I believe you have seniority and the skill. Do you wish to take piloting control of the Moonstar?” Ensign Sparik addressed Lt. Cmdr. Mungar.

“Well, he is a Lieutenant Commander, sir,” Sparik said, pointing at Mungar’s collar pips. “It is only… logical.”

“Yes, but I am the acting first officer of the Sienkiewicz, and in command of this mission.”

“You still, yes,” agreed the Trill, “I’ll be only acting as a senior flight controller.”

“Commander Mungar is more than welcome to help within his field of expertise, but I am in command,” Tamat said. He was not chastising them and stated it as an immutable fact. The Cardassian was very serious about assigned duties and rank.

“I apologise sir,” Sparik said. “Of course you are deferred to as mission commander and the commander of this vessel.” Then  the Vulcan gestured to the Trill, who then took a flight controller seat.

The Calm Before the Storm

They briefed Mungar about their mission. The Moonstar had been sent to inspect the archaeological dig site where the Nairobi beamed up some archaeologists. There, Tamat and Cañete had discovered particles of something in the soil, dug up – like a pillar – made of time crystal. 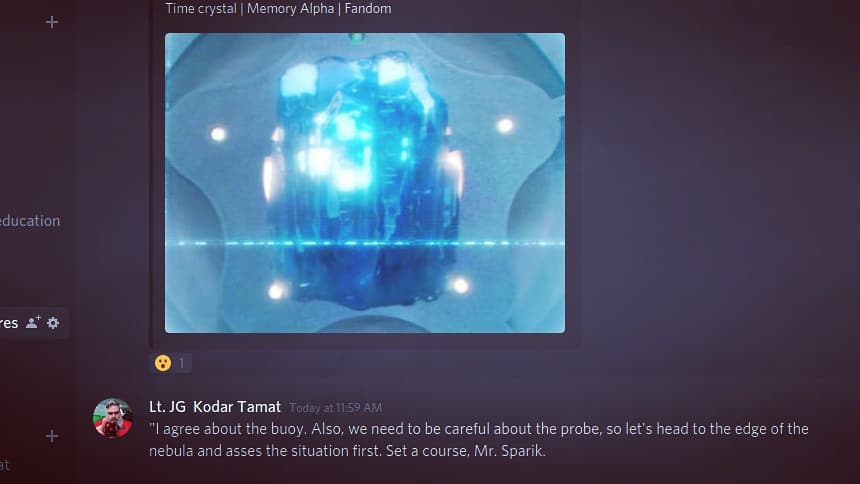 Tamat mulled on this and muttered, “Might be some sort of space breach?”

The comm burst into intermittent activity, “… come in over…”

Tamat hit the broadcast button and said, “We hear you, colony, what’s your situation?”

“Are you …. oonstar? Your ship has….. eaded to look for USS Nairobi who disapp…. Great Mugato Nebul… Commucations cut off… ”

Cañete tried but failed to boost their signal gain (with only 3 out of 4 required Successes) but discovered something. The wisps of exotic matter and metreon radiation bursts were the source of the comms breakdown in the system. Also the sensor board revealed that the radiation originated from the the Great Mugato Nebula. And it was also travelling across subspace!

Tamat told the colony, “We don’t have the whole picture, but we’ve got enough. We’re going into the Nebula, after the Nairobi.” 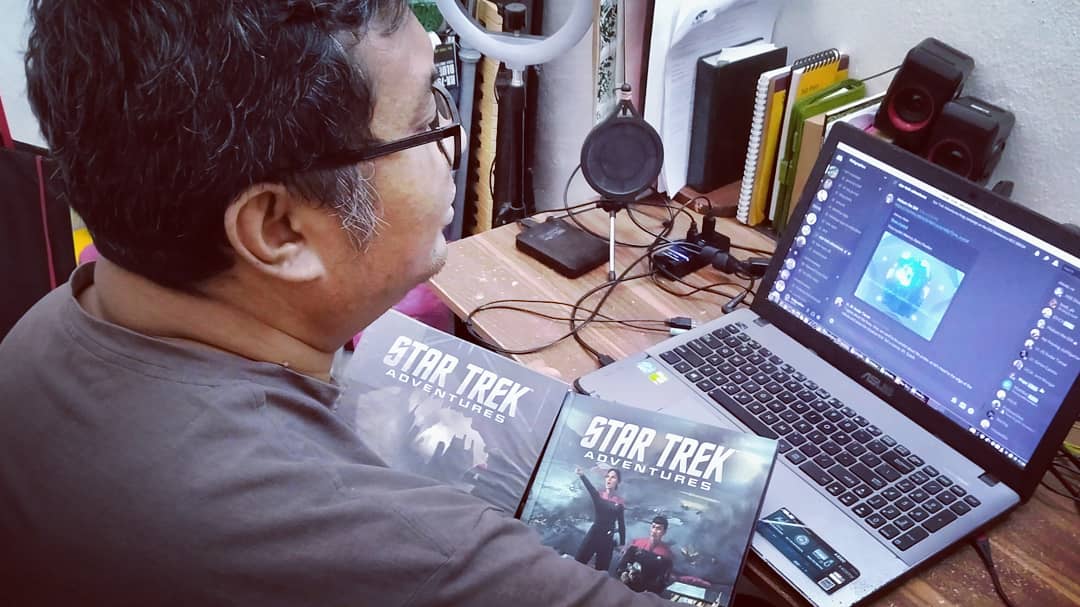 Tamat agreed to jettison a buoy and ordered Sparik to head for the nearest edge of the nebula’s boundary. However, the tetryon burst subspace sensors detect walls of unusually high-energy metreon radiation coming in waves from the nebula.

Monitoring the sensors (using his Hazard Awareness Focus) Tamat was able to help Sparik to manually evade the thousand-kilometre walls of energy while at warp. Were they destructive? They did not intend to find it out by first hand experiments. (And thanks to Mungar’s Technical Expertise Talent.)

After 30 minutes, the Moonstar dropped out of warp 200,000 km from the edge of the nebula.

Through Time and Space

With the filters set up by Cañete and Mungar, the Moonstar detected voice communication in a Starfleet frequency. It appeared to be a female human voice, coming from inside the nebula.

“This is Lt. Sabinsky of the USS Jemison. We were caught in some sort of quantum slipstream. Our location: unknown. We are in some sort of nebula. There appear to be Klingon ships attacking us. Any Federation ship in the vicinity, please help.”

Tamat was quick to answer. “Jemison, this is the runabout Moonstar. We’ll try to locate you and run to your assist.”

“We copy, Moonstar. You should be able to pick up our transponder.”

Mungar considered using his diplomatic skills to persuade the Klingons from attacking. Then Sparik spoke with a tinge of bewilderment, “I am not picking up any sort of transponder signal from the nebula, sir.”

Tamar (succeeding an Insight+Engineering roll) detected a mass of tritanium at the edge of the nebula’s gas clouds. It could be a starship. He said, “I think I have them. Coordinates being fed to the helm.” 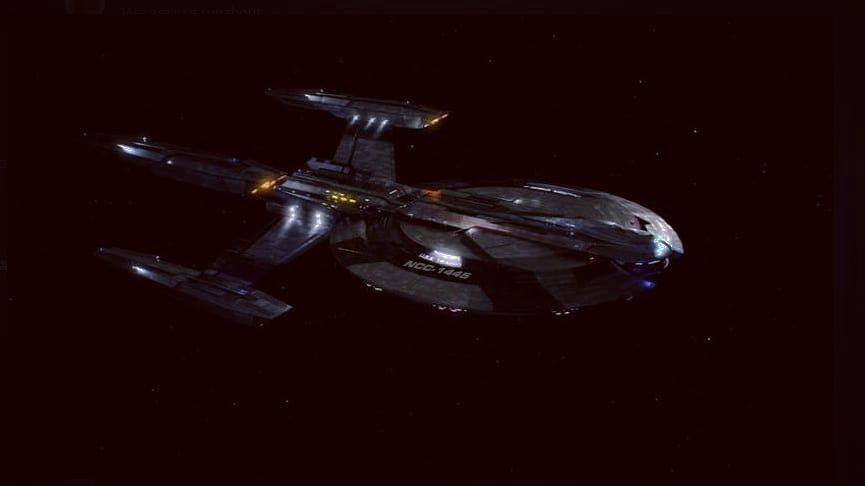 Echoes of the Past

“Moonstar,” the comms buzzed urgently. “Where are you? We need help!”

Tamat told them, “We’ve located your signal and we’re on our way!” and Sparik jumped to warp. At that range it would take them 30 seconds at Warp 2 to reach the Jemison.

“If you rescue us, we’ll owe you dinner, Moonstar!” said Lt. Sabinsky.

Tamat happily chimed, “I hope you’ve got some canar.”

“I don’t know what a canar is, but I’m sure our food processors can make it.”

The Moonstar dropped out of warp this time very close to the swirl of colourful gases of the nebula. Lt. Tamat barked, “Mr. Cañete, prep our weapons. I am activating shields. Mr. Sparik, be ready in case we need some evasive maneuvers. Commander Mungar, you’ll hail the klingons.”

They detected two more masses of tritanium and other elements consistent with Klingon spaceframe construction. But both were also not emitting any signals nor radiation, like the first mass.

Lt. Cmdr. Mungar said, “I could persuade them to stop attacking”

The comm, clearer than ever, said: “Moonstar, Jemison. The Klingons are firing torpedoes. Our weapons and shields are down. Can you use phasers to intercept the torpedoes?”

Tamat ordered shields up, weapons ready and hailing frequencies open. “We’re on it, Jemison. Mr. Cañete, fire on those torpedoes.”

But there were no torpedoes.

There was no USS Jemison, nor were there Klingon ships.

Something Ends Something Begins

They saw a carcass of an old Cardenas-class starship with the name USS Jemison NCC-1445 stencilled on its hull. But there was a huge hole through its saucer section where its bridge was supposed to be. A hundred kilometres away were the dead husks of two Qugh-class Klingon destroyers. The battle had ended years… centuries ago. They were without power, without any life, adrift.

“Is that a 23rd century starship?” blurted out Tamat bewildered.

Lt. Sabinsky’s voice returned on comms. “Moonstar, where are you? Our shields are down!”

Cañete was absolutely dumbfounded. “Wha- Who’s shooting- ? Wait. I get it.” His eyes grew wide with realisation.

“I thought we weren’t getting any signals because of the nebula… and they didn’t know about canar!” The Cardassian lieutenant snapped his fingers.

“Oh… torpedoes are incoming,” Lt. Sabinsky had a sombre but steady tone. “Moonstar, it has been an honour.” The transmission died.

Mungar, referencing the library computer, found a similar event that occured 9 years ago involving the crashed USS Olympia and the crew of USS Defiant in the Beta Quadrant. The phenomenon there was caused by an exogenic field composed of subspace metreon radiation.

“Echoes of the past, that is all,” Tamat says, wiping his ridged brow. “Let’s find some living ships.”

With their newfound knowledge, Tamat, Cañete, Mungar and Sparik recalibrated the sensors to improve the Moonstar‘s flight computers, compensating for the time disparity. They discovered that the Jemison and the Qugh-class destroyers had collided with a metreon radiation “wall” at the edge of the nebula.

The wall formed a huge “cave” that bordered and enclosed part of the Great Mugato Nebula. If they travelled through the border, the radiation might affect them or the Moonstar adversely. Not long afterwards, the sensors detected the “cave entrance”. The Moonstar increased speed to full impulse and slipped through the entrance.