The entry title for this Eclipse Phase session report is play on the title of Machinations of the Space Princess.

Andrew’s Venusian glider-morphed Wandering Ina (a.k.a. Kana) and Matthew’s Badal Jones the Lunar Lagrange Alliance Envoy were absent and was used as NPCs at crucial times of the session.

Ivan GMed, as this photo shows: 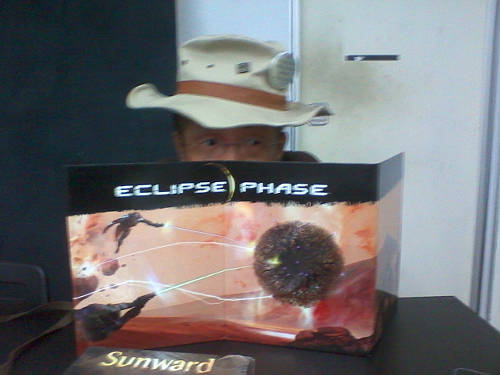 The mission, which continued from the previous session, was to help Badal Jones with the security for his LLA ambassador’s contingent as they attended the art show that would display the Factors’ alien sculpture pieces collected by the reclusive posthuman artist Marquis d’Homem-Christos at the Cumulus Hotel on Aphrodite Prime. There was a second, a more secretive mission from Gretchen Ambelina of Pax Familae: which is to sabotage the art show. The team had decided that these two missions could be run side-by-side without any conflicts of interests.

First thing in the morning, Cable aided Hokusai to build up Rep for his art social media mesh site renamed Obloquy (the original name Digital Easel didn’t have a controversial online activist vibe enough. Also it sucked). Hokusai would update socially controversial artwork, slam heads together, induce squabbling then try to gain and sift intel from squabblers, by pushing the right buttons with people in F-Rep circles. Hokusai’s cover ID in Obloquy was Pickman Algol, Cable’s was The Lumpy Space Ambassador and although he hadn’t activated his account yet, DANAI planned on being an online troll with an opposing viewpoint named Shasta.

Hokusai uploaded a digital painting of the disc of the planet Venus with three layers. The top third of the planet – encompassing the northern hemisphere – showed greenery and life. The middle equatorial third showed Venus’ surface as it was. The bottom third was a mishmash of darkness and burning human skeletons that trailed bits of flame and debris into space.

Apparently this “Pickman Algol” dandy was against the terraforming of Venus. 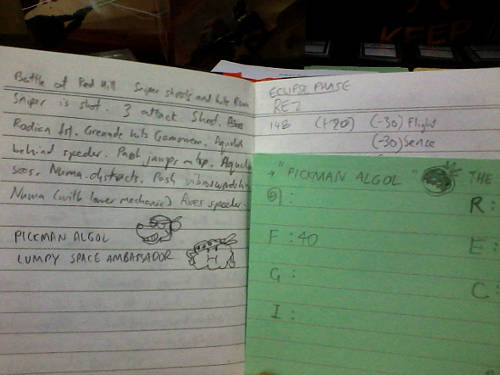 Cable decided infiltrate the Aphrodite Prime Security Network. The best persons (where “person” is loosely defined) for this were DANAI and Ina. So they had to retrieve them in the Sheldon morph from the Total Rekall Sleeving Facility. Cable called up Badal Jones for assistance.

Jones notified Rekall, informing them he had lost a personal item when he inspected the facility the previous day. His slitheroid security contractor Heinrich would be dropping by to retrieve it. When Hokusai arrived (in his Heinrich cover), a female Rekall exec escorted him in his search.

Jones’ call to allow Hokusai diplomatic permission to re-enter Rekall had of course ensured that Hokusai had to find and retrieve something. Hokusai pretended to discover the Sheldon morph under a table and, before the exec asked, told her that this was his employer’s favourite toy: a tamagotchi – pleasure toy combination device. Hokusai pretended to push some buttons to feed it while informing the exec that the Lunar Lagrange Alliance would like to keep this a secret… before reabsorbing DANAI/Ina’s morph back into the cloaca under his snake-like torso, like an unholy reverse-birthing of an egg.

For some reason, DANAI/Ina felt strangely at home. Let’s leave it at that.

En route back to the airship, DANAI attempted to hacked into the Security Network (…and rolled a freaking 99). Immediately alarms went off. Bots were attempting to determine the origin address of the hack. Hokusai was alarmed that the cops would triangulate his cloaca as the hack origin. Thankfully, DANAI was able to successfully reroute the address to a orbital comm satellite that had an antenna pointed offworld.

Hokusai was happy that no SWAT team would be breaking down his cloaca with a battering ram.

Back at the airship, Ina’s ego was loaded into virtual with time sped up to sixty times the normal rate so it could code a bot attack on the Security Network spiders before the end of the day. In the meantime, Cable and Hokusai discovered something while investigating the feedstock lines to the Cumulus Hotel’s makers – the only avenue where the hotel’s security could be breached. There was a spike in the feedline network that consumed higher energy than any other point.

It was located within the Aviary Authority construction site on the side of the habitat, exposed to the unbreathable Venusian atmosphere.

Let’s Take a Walk (and a Flight) Outside

The Aviary Authority had contracted one Ikea-Tata Constructions Inc. to extend its habitat modules, where life forms would be genetically created, modified and released into the air outside to create a brand new Venusian aerial ecosystem.

The team geared up for an on-site investigation. DANAI was resleeved in the Janet morph and wrapped himself around Hokusai. Hokusai slithered to the construction site from within Aphrodite Prime while Cable suited up and piloted one of the airship’s ultralights and circled the Aviary section from half a klick away amongst a dozen other recreational ultralights. From his open cockpit seat, Cable remotely created a cover ID for Hokusai to infiltrate the Aviary construction site. 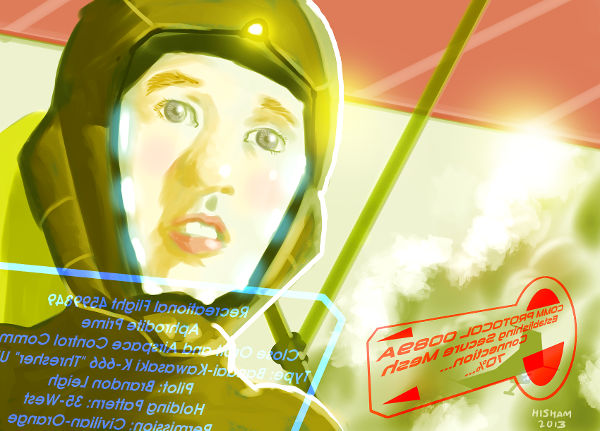 Hokusai as the hostile environment welding specialist Tops Ticklepops managed to slip into the site even with an extra morph hidden upon his being. The site was open to the atmosphere and had construction scaffolding criss-crossing the entire section. Following the site work AR directions, Tops Ticklepops slowly and carefully slithered his way to where he was needed, very glad for his morph’s grip pads. One wrong twitch and a 50-klick drop down to the Venusian surface would greet him.

Cable, observed the weather AR feed, discovered that although there were no storms nearby, tectonic activity was increasing on the surface of Venus – which was impossible because Venus had no tectonic plates. Cable filed this anomaly for later study.

As he worked using welding gear found on site, Cable sent a message and a video feed. His enhanced vision spotted a darkened area deep within the construction site. No lights. No workers.

“Tops Ticklepops” had a 12-hour shift to cover, so DANAI had to do the legwork. Which was kind of hard since the custom-designed Janet morph had no legs, only a pair of hands connected by an electronic rope. After Hokusai’s failure to throw DANAI so he could swing toward the dark zone (SOM 5, man! SOM 5!) the Janet morph inchwormed its way toward its destination.

The dark zone was home to a single cargo container. DANAI crawled up toward the door controls, tried to use his skin links but discovered that a regular wireless mesh connection was sufficient to fool the door into opening. (But unknown to the character DANAI, an alarm was tripped.) Within the container were piles of boxes. He opened one and used his knuckle’s enhanced vision to take a photo and distributed it to the others. They were enough parts to assemble dozens and dozens of combat robots. Cable identified them as being the same type and batch as the ones they discovered at Cloud Nine. It looked as though these weapons of destruction had been here for a long time, longer than the Marquis’ art show announcement.

Why were the robots here? What did it have to do with the impending attack on the Cumulus Hotel? DANAI thought surveillance gear would help answer that question. Hokusai sent his speck drone to DANAI. The robotic fly-on-the-wall took its spot within the container as its sensor feed was transmitted to Cable. DANAI crawled back to Hokusai and after his shift was over, they left the site with nary a cover blown. (Hokusai thought that welding using specialised gear in toxic atmosphere hanging over a 50-klick drop was quite a relaxing experience.)

Meanwhile, Cable arranged for Ted, his AI Muse, to have one ultralight skimming the edge of the 500 meter no-fly zone from the Aviary construction site, receiving the speck’s signal at all times. Ted would switch ultralights with another before running out of fuel. The airship had plenty of ultralights folded away, ready for launch.

When they reconvened at the airship lounge, night was falling and Ina had finished its work. The DDOS attack program designed to overwhelm the aerostat’s Security Network was completed and prepared to be implemented. Hopefully this would force the city to shut down the art show before it started, and allow Gamera Security to take advantage of the chaos to learn which terror group was planning to attack the hotel.

What would happen next? Tune in next time on Eclipse Phase: Clouds of a Morning Star!