GOKL‘s Eclipse Phase “Clouds of the Morning Star” story arc (gamemastered by Ivan) continues from the previous session. Wandering Ina (played by Andrew) and DANAI (played by Darren) – both in a single Venusian glider morph – continued their investigation of a massive ego theft ring that may have passed through the Cloud Nine aerostat – a floating city in the skies of Venus. Meanwhile, Cable and Hokusai (played by me) manned their newly purchased airship, hidden in the clouds out of sight from Cloud Nine.

Since Kai was unable to make it, this session had three player characters, but with two of them inhabiting one body, which was a great concept in roleplaying.

It was time Hokusai delivered more weapons and gear by sneaking onto Cloud Nine. DANAI/Ina had managed to hack into Cloud Nine’s aerostat administration network and gave themselves Security-level permissions in the system. Employing The Bus That Couldn’t Slow Down gambit, Ina saved 30 minutes of video footage in all security cameras and wrote a script that would override the camera feed with the looped captured footage where and when required.

DANAI also peeled off a Delta Fork of its ego – named DANAI-δ – to be implanted in the security system and would take over sousveillance operation when required. They created a faux Mesh ID that would be tagged on Hokusai when he arrived aboard. Then they suppressed the external security camera as Cable drove the airship from below toward a low-security airlock. (Cable might have seen spiral shapes in the Venusian clouds as he piloted the ship, but there has been no confirmation.)

Hokusai climbed up, his tracks covered by the video loop footage, and met DANAI/Ina who then swiftly holed up under the station reactor where weapons and gear were disbursed liberally. DANA/Ina were giggling at Hokusai’s faux Mesh ID which they had named “Romeo Pissant”. Hokusai facepalmed. DANAI/Ina holstered their rail rifle. Hokusai stowed away his laser pulser and his diamond axe. Then they moved out before the reactor’s radiation broke anything.

It was technically night-time in the 24 hour day simulated cycle although it was daylight outside – a Venusian day was 243 Earth days.The biomorph flyer and the synthmorph slitheroid crept toward one of the unmarked, locked-down manufacturing lots and broke the non-connected lock that sealed it. Within are stacks and rows of crates filled with pistols, all bereft of any manufacturer’s identification. (It saddened DANAI/Ina that there was no ammunition.)

The intrusion team discovered a cargo elevator, and moved to the next level where they found the same storage layout. But each crate was filled with rifles and heavy weapons. They went up the third level and found more crates there, filled with disassembled security drone parts. They were all suspiciously unmarked. Meanwhile, their information feed was being streamed to Cable in the airship through their Mesh VPN.

Hokusai quietly hugged the floor and snaked his way to the booth only to realise that Dario Silvestri whom they investigated at Parvati aerostat was within. Whatever happened to his gambling debt there that he owed the Night Cartel? Suddenly, a wheeled drone unwittingly ran into Hokusai. (An awful Infiltration roll. Don’t ask.) The drone blared an alarm, causing Silvestri to come investigate. Hokusai slipped further into the shadows and coiled. Thankfully, Silvestri failed to spot the chameleon cloaked figure and returned to his station. There was no way Hokusai would be able to get close enough to a computer terminal.

DANAI/Ina had better luck. They snuck up to the slitheroid who was occupied at his desk – apparently playing World of Dirigibles VR game via his Mesh link – and plugged into a datajack without making a sound and broke into the private factory network. The data was streamed to Hokusai and Cable. Apart from Dario, DANAI/Ina discovered that Fiala O’Donnell, Silvestri’s colleague at Parvarti, was logged into the network from the lounge at the top floor. There was also a server farm and a farcasting device located beside the lounge. What were they both doing here? Were they trafficking stolen egos through this office as Gretchen Ambelina had suggested back at their office on Gerlach? 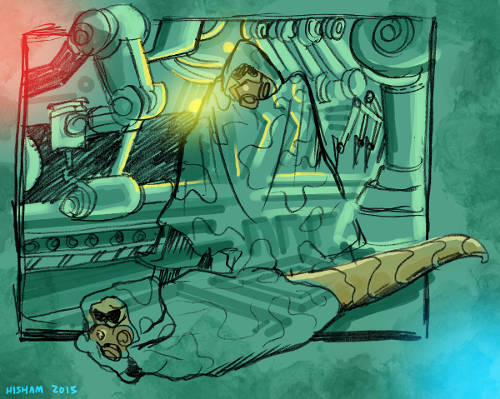 They considered sneaking onto the top level, but dared not take the risk. DANAI/Ina downloaded the weapon blueprints from the console and carefully fell back to the elevator shaft to rendezvous with Hokusai who was also on his way down. All the relevant information transmitted to Cable, they returned to the airlock. Hokusai returned everyone’s weapons and illegal gear into his backpack and attempted to return to the airship.

As he was rappelling down, his dinky mechanical arms slipped and he fell. (A Climbing roll of 99! A CRITICAL FUMBLE!) He bounced off the top of the airship once and slid down the side of the fuselage (a 16 on a second Climbing roll at -10! Phew!) Then he hauled himself up and into the airship. Cable then pulled the ship away from the aerostat and established a tight beam communication link with Kage, their main contact back on Gerlach but without any references to Gretchen Ambelina’s lead that had led them to Cloud Nine. No need to mention Pax Familae for now.

When he had been fully briefed, Kage agreed to help clean up the Cloud Nine situation, but first he asked them some suspicious questions, like if the team was able to engage Yamaha-Pacifica security (they weren’t) and if they have told anyone else about this new development (they lied no, but Hokusai directly contacted their team-mates, The Wandering Kid and Dexter, and transferred all their mission records to their Gerlach office).

When Kage told them to exfiltrate all operatives before he began his clean up operations, DANAI/Ina put on their breather mask and sprinted for the nearest airlock.

What would Kage’s clean-up operations be? And how destructive would it be?

To be continued next time on Eclipse Phase “Clouds of a Morning Star”.

Thanks to Andrew and Darren for their notes. Thanks to Ivan for running the session.