Last time on Eclipse Phase: Clouds of a Morning Star the team was joined by Matthew’s player character Christoph de Beers from the Jovian Republic.

However, there was a quantum temporal flux and the character metamorphosed into the Lunar Lagrange Alliance envoy Badal Jones, a Welshman. The out-of-character retcon avoided difficulties of roleplaying a character from a racist, pure humans-only society mixed with a group of posthuman player characters.

Jones had commissioned Gamera Security‘s services for the upcoming art gallery event at the Cumulus Hotel at Aphrodite Prime. The event would display Factors’ alien sculpture pieces collected by the reclusive posthuman artist Marquis d’Homem-Christos who lived on the asteroid 163693 Atira and would be farcasting to Venus in a few days.

The mission objectives were clear: Jones engaged GamSec to protect the LLA ambassador during the show and (two session ago, when I was absent) Gretchen Ambelina informed Cable that she wanted the show to fail. The two objectives were not necessarily exclusive. They need to ensure the LLA visitors’ safety while they sabotaged the event.

But how would they do that?

Plans were laid out between the GamSec members. Attempting to intercept the Marquis’ sculpture-bearing shuttle en route from 163693 Atira to Venus was an idea that was sunk by the lack of space piloting skills between members of the company.

So they settled on something easier: to intercept the Marquis’ farcast, kidnap then box him in virtual, put Ina in his Venus-fabbed custom morph whatever it may be. They would have to locate the Marquis’ waiting morph and hack the resleeving hardware and software. The job fell to DANAI and Ina, both to be sleeved into a Sheldon-class drone: the walking egg with the cyberbrain and crotch-mounted data cable launcher. But it had no arms. (It’s fine though, cause DANAI’s Somatics was miserably low.) Once Ina’s fork had commandeered the Marquis’ custom morph, he would make as if the Marquis was blundering through his own event with one catastrophic social faux pas after another; bad enough to disgust the guests into leaving the show; effectively sabotaging it without harming anyone.

Cable began implementing his own plans. 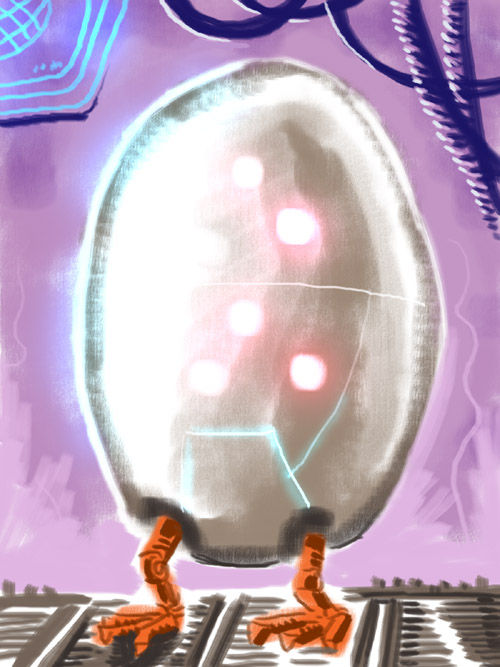 Using his Devastation Jackson cover ID, Cable started making a lot of noise in the local mesh, calling for a violent halt of Venus terraforming, which attracted someone’s attention. Someone who might be from the Free Fall Network, the group GamSec earlier discovered that was stealing and sabotaging mining equipment and vehicles. They met up in virtual, but after Cable pitched his idea to employ “a radical and subversive artist” (namely Hokusai under cover) to aid in their struggle against the terraformers, the man called Cable up on his lies and demanded the truth.

Cable then gave him a fair amount of the truth about the Marquis’ art show and their impending sabotage of it, but using the name “William Cable” instead of “William Cable Jr.” and without mentioning Gamera Security. The man believed his gambit and revealed to him that a sabotage attempt would be executed during the art show, using the hotel nanofab’s feedstock pipeline. Before jacking out of virtual, the agent promised to contact Cable.

Was it FFN? Was it some other terrorist group? Was it a Morningstar Constellation covert agent? They would soon find out.

When Cable reported his findings, DANAI thought perhaps the terrorists that the LLA had gotten wind of and hired them to stop were actually themselves. (Yay! Self-fulfilling prophecies!)

They contacted Jones and informed him they needed to inspect Aphrodite Prime’s Total Rekall Resleeving Facility which has farcasting stations with full medical facilities, morph storage and immigration enforcement department. Under official LLA diplomatic license, Jones and Hokusai (as Heinrich) were allowed into the resleeving facility to inspect it for future Lunar-Lagrange Alliance official use.

At the custom morph storage chamber, Jones kept the centre’s public relations officer busy with questions while Hokusai x-rayed the pod that bore the Marquis’ custom morph and sent the x-ray image capture to everyone else via their private mesh network. The morph resembled a bipedal, human-like synthmorph with a chrome helmet and an LED screen for a face.

The public relations officer heard the jack connecting and was about to look around when Jones forced her attention back to him (critical success with Deception) while Hokusai slammed his tail about, then apologised for the sudden noise. He was, after all, an neo-octopus uncomfortable in a rigid slitheroid synthmorph.

In the meantime, DANAI and Ina were forking Ina and making modifications to the system’s software to allow for ego kidnapping.

They returned to the Cumulus Hotel and asked permission to do their own security walkabout. Especially in light of Cable’s revelation of a probably FFN sabotage attempt via the hotel’s feedstock pipelines. However, they found nothing out of the ordinary.

Later the team, including Jones, travelled to Aphrodite Prime’s spaceport where the Marquis’ cargo shuttle was landing. Here was the central object that brought everyone together in this caper for better or for worse. Everyone watched as automated stevedores carried the cargo and prepared it for transport to the hotel for secure storage and hoped everything would go as planned.

(And as a metaquestion: If d’Homem-Christos would be appearing soon, where was Bangalter?)

To be continued next time on Clouds of a Morning Star!