Last Sunday, the Eclipse Phase group, playing the members of the Gamera Security hypercorp finished off our investigation of Cloud Nine aerostat on Venus.

After their “patron” Kage Musha ordered all GamSec operatives off Cloud Nine so his personal force can take over what seems to be the hypercorp Yamaha-Pacifica‘s illegal weapon manufacturing facility there, Billy Cable Jr. and Hokusai Tarnungshaut pilot their airship back there to pick up DANAI and Wandering Ina, both in the Venusian glider body.

DANAI-δ, DANAI’s delta fork in Cloud Nine’s mesh network, masked an airlock from the security systems so DANAI/Ina could jump off the aerostat and onto their airship. (Cable had rolled critical success for airship piloting and was expertly flying the ship, cloaked in Venusian clouds.) Suddenly, DANAI/Ina was/were interrupted by the inner airlock door opening. It hid by jumping off the airlock’s external platform and hanging on to its edge.

It was Dario Silvestri from the factory who was enjoying a bit of recreational drug Alpha. DANAI/Ina used its electronic rope to grapple Silvestri, then used a Zap round from a coilgun to blow a whole quarter of his head off. (It was a mistake. Honest. A Zap round usually stuns. But not just at so close a range.) DANAI/Ina pried off Silvestri’s cortical stack from his exposed spine and glided off the aerostat.

However, it wasn’t used to the morph and air thermals blew it off course. Thankfully, Cable’s awesome piloting skills allowed him to match DANAI/Ina’s erratic fall and for the second time caught a morph falling off an aerostat.

Then they returned to Octavia, the largest aerostat in the skies of Venus where they considered their next move.

First they decided to open a physical office on Venus, and thought the Parvarti aerostat would be a good place to be. They sent word to Wandering Kid and Dexter Morgan (the PCs with absent players) to begin moving their stuff from the current office on the Gerlach habitat in space to Parvarti, but leave a barebones office presence back on Gerlach.

Secondly, DANAI wanted a new morph. After much deliberation, the team spent credits to custom design a brand new morph for it. The new morph is basically, two human-looking hands (synthmorph) connected with a cord of 10 meter-long electronic rope, fitted with a cyberbrain with mesh insert, cortical stack, voicebox, sensory equipment on its knuckles, lidar, grip pads, skinlink, eelware and chameleon skin. It would be able to function as an extra set of hands if wound around another person, or be a thrown weapon that would be able to stun an enemy with its eelware, or creep up to an enemy to inject a drug into him or her. We also purchased two skillsofts in Unarmed Combat and Infiltration. Its initial WOUND THRESHOLD is 5 and DURABILITY 25.

We called it the “Janet” morph.

And now there exists a character in our Eclipse Phase game that looks like this: 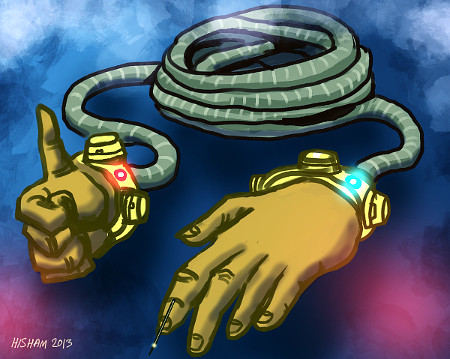 Which i think is pretty freaking awesome.

Wait a second. Whatever happened to Danai-δ?

To be continued next time on “Eclipse Phase: Clouds of the Morning Star”.