The GOKL Eclipse Phase RPG campaign “Fastball Express” has started up again, and the uplift neo-octopus Hokusai Tarnungshaut is back in action, except he no longer has eight tentacles. Three game sessions were held so far and I managed to participate in two.

So the story goes: some of the intrepid posthumans of the Fastball Express hypercorp was darkcasted to Parvati, an aerostat high above the surface of Venus. Hokusai had died some time earlier his octomorph blown up by a bomb, and the team retrieved his cortical stack and resleeved his ego in a worker pod morph.

However, Hokusai remembered nothing else before waking up in an arachnoid sleeve at Parvati with Billy Cable Junior the neotenic, Danai and Dexter, their memories edited “for security reasons”. (That doesn’t sound suspicious at all, right? RIGHT?) Their Morningstar Corporation contact gave them a mission to discreetly investigate diseased biomorphs which had then disappeared along with their egos without a trace from the aerostat. 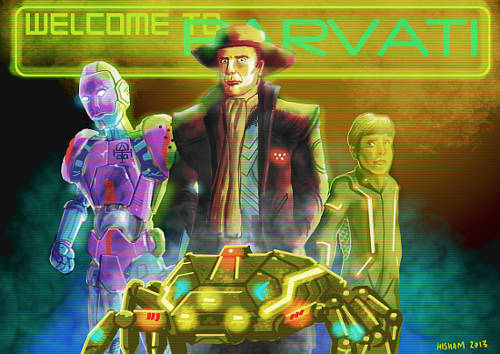 However, as I wasn’t able to attend the second session, I discovered that the company had experienced a TPK. After successfully completing the mission, a chunk of the Parvati outer skin came off and sucked the group outside. Everyone fell many, many leagues down into the inhospitable Venusian atmosphere.

I asked what happened to Hokusai, seeing as I wasn’t around to play him. Our gamemaster Ivan merely said that the only way to be certain what happened is to retrieve Hokusai’s cortical stack in the arachnoid morph. “Imagine where the Titanic is now at the bottom of the Atlantic. Now imagine that’s where your morphs only the conditions are even more inhospitable.”

But this seems moot because for the third session, Hokusai woke up once again but sleeved in a slitheroid morph and had no memories of Parvati. He found himself on the O’Neill cylinder Gerlach orbiting Venus accompanied by Cable, Ina and Wandering Kid. Although I played Hokusai oblivious to this, I – as the player – wondered if our egos had been forked, and what was the other fork (or forks) doing.

For ease of operations (and legitimacy, somewhat) the group created new cover IDs for everyone and a front company, a hypercorp named Gamera Security (Irfan was present during this session and he brought his Gamera toy). Their station contact Kage assigned Gamera Security to investigate a recent bank robbery. An ego bank robbery. The egos stolen were backups of people who lived on another Venusian orbital station named Timbuk3. One intriguing fact about Timbuk3 was that it was violently affected by exsurgents during the Fall, and the station had tumbled into the Venus atmosphere where it presumably crashed into the surface at an undetermined location. And no one’s really taken a look to find out where since the Fall.

Meanwhile, by interrogating in simspace other Timbuk3 egos that remained in the bank, Cable discovered that his father had been at the ill-fated station just before the Fall. because of their history, this information jolted him into full paranoia mode. 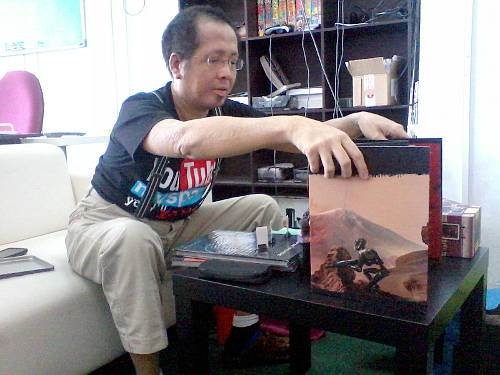 Using the Open Security protocols of Gerlach and airborne minidrones, they tracked the thieves into a wilderness preserve of the nearby arcology named Renraku which was occupied by a whole society of Argonauts. They discovered tracks in the thick forest that led to an unlisted hatch which took them through secret tunnels deep under Renraku. Even the Gerlach’s position system was not able to determine their locations. The trail led them to an unlisted airlock – presumably built by the previous occupants of Renraku, the prominent industrial hypercorp Fa Jing – and went extravehicular, crawling on handgrips as centrifugal force threatened to throw them out to space.

The group followed the newly-installed series of handgrips. Wandering Kid used his arachnoid thrusters to fly out to space to see over the massive curve of the Gerlach cylinder. He spotted security robots guarding a newly-constructed centrifugal launch site on Gerlach’s hull. The bots fired their guns, damaging Kid, who retreated back down over the horizon for cover. Cable called Kage to send in a patrol ship. It targeted and destroyed the bots from a safe distance in space.

But what was it that was centrifugally-launched into space? Who stole the egos? Where were they headed? Why the Timbuk3 egos? Had any or all of the stolen egos been corrupted by exsurgents during the Fall?

To be continued in another session, but HEY! Rez points!