The adventure continued on and around Venus… even as the atmosphere outside where we played appeared to resemble Venus in texture and colour. But we’re not talking about the Great Smothering Haze of 2013; we’re talking about last Sunday’s Eclipse Phase session.

As Kage’s people began investigating the unregistered airlock from which the Spulturatorah Arcology ego bank thieves of had escaped from Gerlach station, Gamera Security returned to their office, leaving Wandering Kid in his battered arachnoid morph to help guard the airlock.

Aggregators via Mesh links alerted them to a relevant news story that developed in the in Jupiter space: Diz, the infomorph inhabiting their old spacecraft the Fastball Special had hacked into Jovian traffic control to allow itself a clear path upwards from the ecliptic plane… toward interstellar space. The ship was unoccupied at the time, other than a hundred kilos of paper cranes. Cable informed this to async Quill – in real life this was communicated by text message – who suggests the dog-shaped sociopath flexbot Kay be launched from Jovian space to go after the wayward ship. “Fetch, boy!” Hokusai thought that Kay would return, hurtling back from deep space with the Special in his jaws.

In other news, the Jovians had started playing nice with Planetary Consortium, and then promptly started unilaterally dropping giant mobile atmospheric processors on the Galilean moons to begin terraforming them.

Finally, they learnt that Hitoha Hiroshii, sister of their teammate Mitsuba had started to extend her influence in the Planetary Consortium. Their uncle Miyazaki had gained a position in the Consortium.

Soon after, Hokusai in his new Heinrich Ausfahrt Plissken slitheroid cover tried to find out if there were other unregistered airlocks on Gerlach, but was not able to.

In the meantime, Cable using his Farley Flynn cover began studying about the Venusian space salvage industry to discover the secret of the crashed habitat Timbuk3. These salvage hypercorps included the Teddy Bear Roadside Picnic Company hypercorp, led by the polar bear ursamorph Mr. Snuggles; and Ladyboys Salvage and Repo, that had been a South East Asian-based hypercorp before the Fall. The Timbuk3 investigation ultimately led to a dead end.

It came as a surprise that Gamera Security was suddenly visited by Gretchen Ambelina, an agent of Pax Familae who claimed to have “mutual friends” and being vague about who it was. She hinted that the illegal ego farcasting syndicate at the Parvarti aerostat (where earlier forks of Cable, DANAI, Hokusai and Dexter were involved in investigating) was connected to the software manufacturing hypercorp Egonomix on the Cloud Nine aerostat. She promised a hefty sum of credits for their services to investigate Egonomix, and who knows, this might even lead to the stolen Timbuk3 egos.

Since the two Infomorphs Wandering Ina and DANAI were the only ones not yet publicly seen as Fastball Express connections on Venus, it was assumed they would not trip any alerts if the theives were on the lookout for them. They would be the point men in the operation – or rather the point man – as Ina resleeved itself in a Venusian flyer morph and received new ghost rider module and puppet sock implants (by someone resembling James Hong in a cryogenic chamber, no less). DANAI ditched its case morph and uploaded itself into the new ghost rider module. A two-man team in one winged biomorph body!

Then they formed a new hypercorp named Oxford Mathemathical Instruments a.k.a OxMI, an AR and simspace game producer. DANAI/Ina set up an appointment for OxMI with Egonomix, posing as a potential business partner in the interactive entertainment industry.

As they chartered a flight to Cloud Nine, Cable and Hokusai took a passenger ship from Gerlach down to Octavia aerostat where Cable used his money to purchase a dirigible, with which they both would fly to and maintain communication distance with Cloud Nine while DANAI/Ina did their job there.

Meanwhile, DANAI/Ina met with the aerostat administration personnel Zipporah Pinochet (who looked like Borat) who gave them a tour of Cloud Nine. (The DANAI/Ina ghost ridden sock puppetry shenanigans were somewhat entertaining.) They discovered a large collection of areas – offices, factories, storage, etc. – in the aerostat that were suspiciously closed off.

At first Ina tried to persuade Pinochet to tell them about the closed off areas but it discovered that its persuasive skills were lacking, so it allowed DANAI to take over the morph from its ghost rider module – in mid conversation. Pinochet, who thankfully did not spot the change, informed them that he did not know what went on behind the closed doors there.

Then DANAI tried to hack into Cloud Nine’s network and failed, so they had to switch again. Ina succeeded in hacking the aerostat network and discovered that Egonomix was uploading an unusually high amount of data offstation. Was it the stolen egos? Were they in the sealed compartments? After the tour, they rented a hotel room to ponder their next move as Cable and Hokusai await many kilometres away among the clouds.

Oh crap! I think we forgot to tell Kid we had left Gerlach. 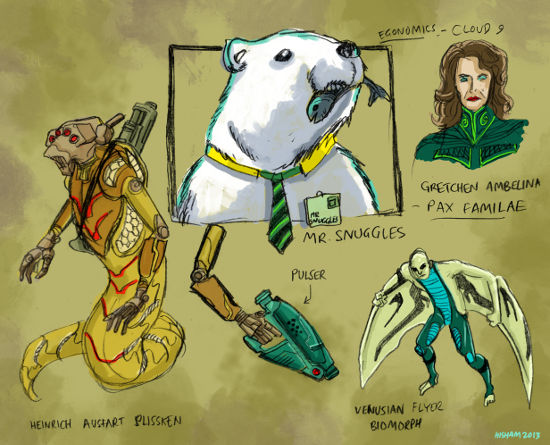 Sketches during game (Mouseover for description)