Edge of the Empire:

Just as it was more than 20 years ago in Sitiawan when a bunch of unfamiliar people asked if I could run Star Wars RPG for them, here I am in the same situation in Sitiawan where online friends I have never met before asked me to run a Star Wars RPG session for them! No big deal to me: it is a great way to make lasting friends!

Unfamiliar with any form of Star Wars RPG, I brought the Edge of the Empire and Force and Destiny rulebooks along with some sourcebooks, the FFG narrative dice set, Force tokens and my trusty homemade paperminis. I forgot to bring the percentile dice so I used the phone dice roller app. I thought I would give the scenario some recognisable Star Wars elements by first starting out the game on Naboo. Then, soon after the Empire could make its presence known…

Human smuggler Matwe, Wookiee doctor Grabow and Wookiee mercenary soldier Lumpy (no relation to Lumpawarrump son of Chewbacca), the crew of the Corellian YT-2400 light freighter Seagate. arrived at the city of Theed on Naboo to look for trader Zo Arkon who was looking for tramp freighter services. 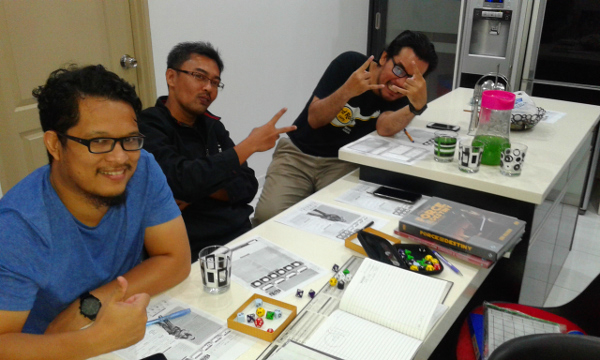 The crew of the Seagate

Upon setting the Seagate down in Hangar 14 on the side of the cliff face, the crew debarked, paid their 50 credit service tax to the port officer and headed for the cantina built into the side of the large cavernous hangar. A series of large windows and automatic sliding doors adorned the facade of the Piledriver Cantina. As the crew approached, the doors slid apart and two Imperial stormtroopers strode out.

The troopers suddenly stopped the crew and addressed Matwe: Did he have permit for the two Wookiee slaves?

As Grabow and Lumpy rolled their eyes Matwe quickly convinced that the Wookiees were from offworld and just arrived as crew on a light freighter for a transport job pickup on Naboo. Thankfully (thanks to a Success in Matwe’s Charm roll) the stormtroopers were easily persuaded by Matwe’s fast talking.

It was the truth anyway. 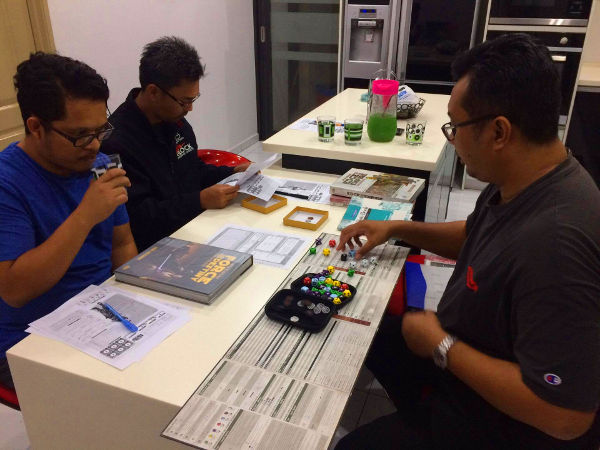 Gamemaster in the shot

Soon after the droid bartender directed them to Zo Arkon who having lunch in a booth at the back of the cantina. Zo Arkon treated them to some bantha steak for lunch while the Matwe authorised Arkon’s droids to load the Seagate with the cargo: a regular looking cargo container. Before the crew left the cantina, Arkon paid them 500 credits, with another 2500 credits to be paid by their contact Milo Renn upon arrival at their destination: the south polar town of Bamboo River on Takodana.

As the trio traipsed back to their YT-2400 freighter, they noticed something peculiar. There was a puddle of dark lubricant on the deck not far from their ship. There was also a set of smudged tracks that ran from the puddle toward the underside of the Seagate where it then disappeeared. Did someone sneak aboard the ship somehow? 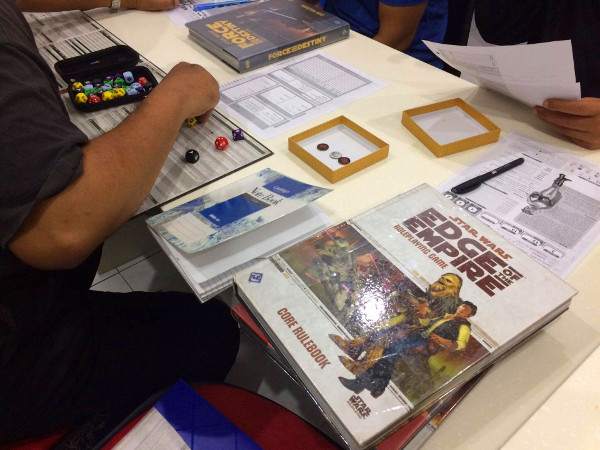 The tabletop with books

Matwe approached a pair of technicians repairing some wall cables and asked if it was possible to access security footage of Hangar 14. They blew him off (because of a bad Charm roll).

Dejected, he returned to Lumpy and Grabow. Lumpy had an idea. They returned to the two technicians, this time asking more forcefully. The presence of the Wookiees – who both tried their best to look imposing (giving 2 extra Boost dice to a Coercion roll) – intimidated the technicians enough that they hurriedly and nervously called up the security footage on a datapad.

Indeed there was a shadowy figure seen in the hologram – just out of reach of the holocams and nearby lighting – who crept toward their ship and disappeared beneath it. Who was it? Was there a stowaway aboard their ship now? Had someone planted a bomb or a tracker onto the Seagate?

They looked high and low in the ship but found not a single thing. (Everyone failed the Perception check.)

Since they have paid the port’s service tax, it was only fair that they summoned the Royal Naboo Security Force to help inspect their ship. A detachment of Hangar Guards arrived to investigate their case. An hour later the squad of six was absolutely sure that there was no one aboard their ship. (They also failed their Perception check, with a dice pool that included a Difficulty dice upgraded to a Challenge dice. WHAT?)

The trio shrugged – figuratively –  and accepted the findings. Perhaps whoever it was had leave the premises unnoticed since.

Less than an hour later, the Seagate had left Naboo’s atmosphere and made the jump into hyperspace. 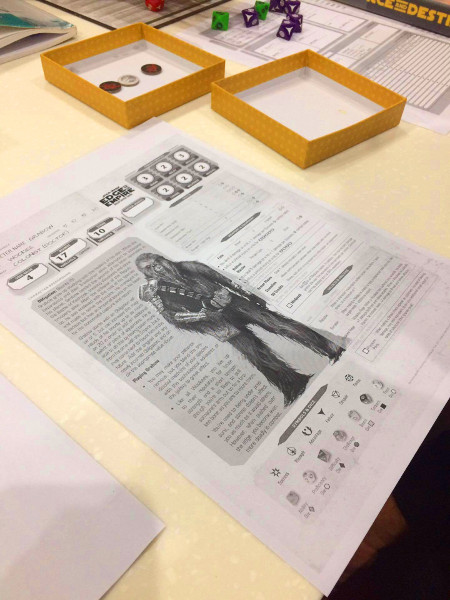 Thirty minutes into hyperspace everyone heard a loud thunk from the cargo hold. Matwe expressed a desire for his money back from the Theed port officer. (Obviously the guards failed their Perception rolls miserably.) Lumpy shut off power to the cargo hold. Lights. Life support. Gravity plates. The whole works.

Then, donning spacesuits, they rush in with weapons ready… only to discover a 9 year old human girl desperately trying to stabilise herself while floating in mid-air.

After restoring power and taking the girl out of the cargo hold, they learnt that she had snuck into the ship through a hull panel and hid deep among the life support and air conditioning machinery behind the walls where it was near impossible to search. (A couple of Setback dice was involved.)

She introduced herself as Tala Tress. And she was in a livid state, pleading that they do not turn her over to the Empire. Her parents were arrested on Naboo several days ago and she went into hiding. Then she thought she should sneak offworld.

Matwe promised her she would be safe aboard the Seagate. 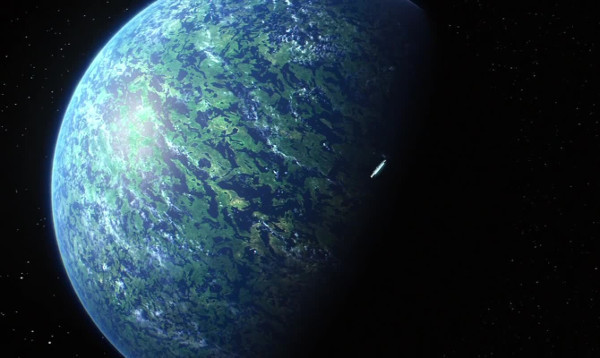 That was when the Seagate dropped out of hyperspace off Takodana… where an Imperial Star Destroyer was parked in orbit. The Magister announced itself and informed them that the warship had been ordered to intercept them here as their flight plan was logged in the Naboo spaceport database. They were told that there might be a possibility that a hunted rebel sympathiser had snuck aboard their ship.

Tala was starting to panic. But they told her they would protect her.

They tried to persuade the Magister that there was no one else aboard, but it failed. The Magister launched the Lambda-class shuttle Darkmantle to board the Seagate. As the Darkmantle closed in on them, Matwe asked the Magister who did they expect had stowed away aboard their ship from Naboo. The radio officer informed them that it was a 21-year old woman named Val Tress, a traitor who disappeared after the Empire captured her rebel parents.

Tala informed them that Val was her elder sister. She had not seen her since she went into hiding in Theed.

Grabow directed Tala back to the cargo hold and told her to hide where it was impossible for the Naboo Guards to spot her. Grabow also gave her a cloak (which he possessed by flipping a Destiny Point from Light to Dark) which can confuse sensor scans – a piece of clothing given to him as a gift by a Jedi whom he had found and protected once upon a time. She quickly climbed into a wall panel and closed it behind her… just as the Darkmantle docked.

The inspection took a better part of an hour, but ultimately the stormtroopers found nothing out of the ordinary. Soon, the Magister had disengaged and returned to whatever task that they had been on before being diverted to Takodana.

The Seagate homed in on the Bamboo River landing field, a frost covered field with basic services. Upon landing they stood around the container and lowered the cargo platform down onto the ground beneath the ship where Milo Renn should be waiting in the biting cold air of Takodana’s south polar region.

Instead of Milo Renn, there were five bounty hunters, blaster drawn, asking them to hand over Grabow to them. (By the way, Grabow’s “Hunted” Obligation had been triggered.) Grabow was wanted for aiding and abetting a fugitive on the run from the Empire (from whom he had been gifted the stealth cloak).

Their leader, a grumpy looking Trianii, told Matwe and Lumpy that it was not worth it for them to defend Grabow. It would be far easier for them to turn over Grabow to them.

They quickly took cover as Lumpy threw a grenade that shredded two of the bounty hunters, a Givin and a Weequay. The Trianii fired his blaster and grazed Lumpy’s head (inflicting upon him a Critical Injury) while Matwe managed to take down the Morseerian bounty hunter.

Grabow covered Tala by the container while he shot and felled the Trianii.

Lumpy drew his vibro-ax, pounced forward and hit the remaining hunter, a Klatooinian. He was badly wounded but (thanks to a Despair result) Lumpy lost his grip as the Klatooinian fell backward with the vibro-ax embedded in his torso. Still conscous the Klatooinian attempted to shoot Lumpy. However, a bolt from Matwe killed him. 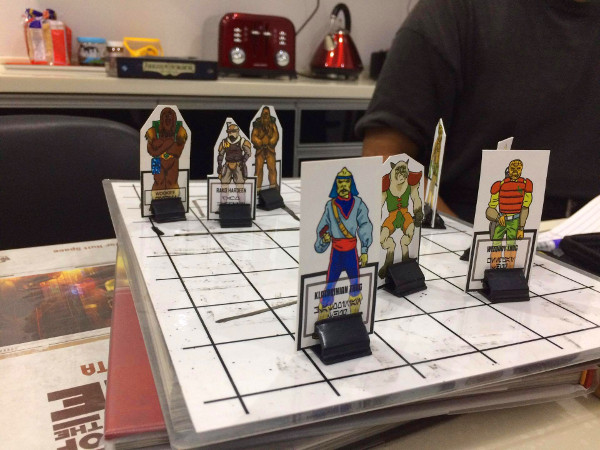 Soon, a speeder truck approached. Beside the droid driver was a Rodian female wearing a thick parka, who identified herself as Milo Renn. She apologised for being late. As her droids loaded the container onto their speeder truck, Milo gave them 3000 credits, an extra 500 was given because she marvelled at the crew’s ability to protect the cargo container during a firefight.

The crew assured her that they always did their professional best during freight jobs.

Soon, Milo and her truck was a receding shape in the freezing winds of Bamboo River. The crew now had a quandary: What do they do with Tala Tress?