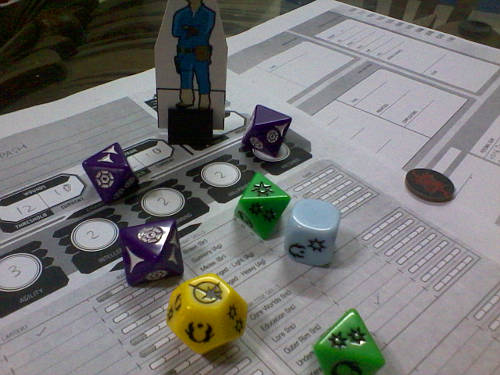 Hmmm. I forgot what circumstances brought up this Triumph roll

The adventure continues from the previous entry: I ran the second session for Act 1 of The Long Arm of the Hutt free downloadable adventure (PDF download, low res version, 2.4MB) on Tuesday morning.

Barreling Through the Badlands

The mission began in the morning. B’ura and Hondo were joined by a Rutian Twi’lek female named Numa. She was in her early twenties and bore a blaster pistol and a vibroknife. Kablo brought them to the east end of Nabat where a tech crew was rolling out an old landspeeder from storage. They were to head east through the badlands for about 300 klicks.

At first piloting a speeder over the badlands was a cinch. Then rocky mounds appeared, and forced Hondo to steer carefully past the dangerous rocks. However (with a Piloting – Planetary roll that resulted in a Triumph) Hondo was able to swerve past all obstacles with no problems.

Fifty klicks from New Meen a tall mound of reddish, misshapen rocks loomed to their right as they passed it. (Hondo failed a Perception check so…) A sniper blaster bolt struck the speeder’s right engine. Failing to avert a crash, both Hondo and Numa were lightly injured, and B’ura was unhurt. Numa used a stimpack to treat her own wounds and pulled back behind the crashed speeder’s chassis.

However a well-placed bolt struck B’ura as he leapt for cover, badly injuring him. (11 damage out of 12 Wound Threshold – 3 successes with a 8 damage blaster rifle.)

Hondo decided to take out the sniper. He aimed, fired and somehow hit the sniper (even with a Daunting difficulty!) who fell silent. Three other assailants appeared from a cave at the base of the hill, an Aqualish, a Rodian and a Gamorrean, each armed with a blaster pistol. Numa and Hondo’s first volley felled the Rodian. When they were closer, Hondo threw a grenade, which exploded away from the target but took the Gamorrean out. Twice, return fire sent shrapnel flying that wounded Hondo.

The lone Aqualish was crouched on the other side of the speeder. Hondo crept atop the speeder roof and drew his vibrosword, but something underfoot creaked. (Skulduggery roll failure.) But before the armed thug could react, Numa yelled from the back of the speeder and fired at him. Hondo used the distraction to leap onto the Aqualish, slicing him with his sword.

The thug fell and did not get back up.

Hondo used his medpac to stabilise the badly wounded B’ura (Medicine roll with 2 successes). Numa successfully repaired the speeder’s right engine (even with Intellect 2 Mechanics 0, one rank lower than Hondo) and they resumed their journey. Soon after, they had arrived at New Meen. At first the Twi’lek settlers were wary of the newly-arrived speeder. When Numa helped B’ura to his feet, more Twi’leks came out to greet them. There were shouts of “B’ura B’an is back!” in the streets. The community leader Temza’anay urged the others to keep calm and guided B’ura and the newcomers to his own ramshackle home. Other Twi’leks moved their landspeeder out of the streets and covered it with canvas. As soon as the door flaps closed, a gray open-top speeder turned up at the end of the street. It moved slowly along the dusty street. Temza pointed out Angu Drombb standing regally at the back of the vehicle. Drombb was a bald, barrel-chested human with the sleeveless shirt, armoured vest and a heavy blaster pistol at his side. He appeared to be looking for something. He said, “You said the chanting came from over here?”

The Aqualish driver said, “Yes, boss. I thought they were saying B’ura B’an is back!”

“There doesn’t seem to be anything here now,” Angu said. “But keep an eye open just in case.” Then the speeder disappeared into a thick billow of dust.

As Temza’s people tended to B’ura, Hondo and Numa were briefed on the situation. Drombb lived and worked at his office in his secure mining compound. The 3-metre tall fence was solid and opaque, and surrounded the entire compound except for the cliff wall on the steep mountainside. Apart from mining droids in the mines, there were 10 thugs that acted as mining compound security. As Hondo considered B’ura his friend, he promised Temza and the settlers that he would help them. (Irfan roleplayed his Ambition: Friendship well enough that I awarded him an extra 10XP for this at the end of the session.)

Numa scouted the mining compound and reported that there was one two-story building across the street in front of the gate. Its roof provided direct line of sight to Drombb’s office and the mine entrance. Every hour, a guard would leave the gate, walk the fence perimeter, report status and then returned inside.

At this point, Irfan as Hondo had no idea how to come up with an attack plan. When he suggested they attacked head on, Numa would say 10 against 2 are bad odds. When he suggested he used his remaining grenade, Numa would ask how would they get all 10 guards to be close together to be able to use it. I had Numa ask Hondo question after question until Hondo came up with the following plan.

Hondo figured they would wait until dark. When one guard was walking the perimeter, he would knock him out, steal his comlink and call in about Twi’lek saboteurs breaking into the mine with explosives to blow it up. When the guards run into the mine, he would then throw his grenade at the mine entrance, cave it in to trap them there. Numa would be prepared to give cover fire from the roof of the two-story building.

Scalping of the Scoundrels

At nightfall, Numa and Hondo waited at the north end of the fence. The guard who approached was an Aqualish approached, looking tired and bored. He reported, “This is Zapnik. All is normal. Returning inside.” Immediately, two stun bolts struck Zapnik knocking him out. Hondo swiped his comlink then Numa and him bolted for the roof near the gate.

Hondo activated the comlink and barked, “Alert! Twi’leks have broken in and entered the mine with explosives!” (Hondo’s Deception check… FAILED.)

“What?” came a voice on the other side. “Who is this? This isn’t Zapnik! Guards! Security breach! Someone has stolen Zapnik’s comlink!” From the roof, they saw 9 thugs exit the office. 5 of them reluctantly rushed into the mine, presumably to check just in case there were bomb-laden Twi’leks within. Four others opened the gates and ran into the street with blaster pistols ready.

Hondo then jumped from the second-story roof over the street and the fence and tumbled onto the compound. (Thanks to a botched Athletics roll) Hondo fell with a skinned knee and shin (taking on 2 wounds and 2 strains) but his grenade throw after the fall was a success. Two other things happened: Numa shot and felled one thug, and an armoured Angu Drombb came out of his office with a heavy blaster pistol. He yelled, “Intruder!” and fired at Hondo, but missed (thanks to Irfan calling for a Setback die caused by vision difficulty immediately after leaving a brightly-lit office and into the night.)

Hondo fired back, but Drombb’s armour absorbed some damage despite a bright burst of sparks and smoke. (Drombb’s 14 Wounds down to 9.)  Meanwhile, the guards outside shot at Numa in vain. She shot back, but not in vain.

Hondo feared that his grenade plan would not work. Drombb yelled, “Guards! Get him!” The five guards were about to come running out of the mine. Suddenly there was a loud explosion and the mine caved in! No one was coming out of it any time soon.

The explosion surprised Drombb enough that he was immobilized for a moment! (Drombb failed a Cool check.) Hondo took the opportunity to shoot him in the chest again. He flew back into the wall violently, but appeared to be on his feet. (9 wounds down to 4, but with an At The Brink critical injury. One Strain loss every action.)

One second Numa was taunting the last two thugs from the roof; the next there was only one guard left.

Drombb was about to shoot at Hondo when he suddenly clutched his chest in pain and lost consciousness. (The action cost him -1 Strain when he was at 0 Strain!)

Hondo yelled at the lone guard outside, “Your boss is down. Drop your weapons or you die.” (This awarded a Boost die to Numa when she started yelling at the thug.) 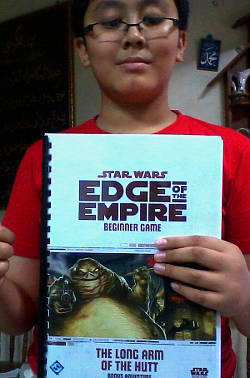 One final pose with the book

Numa yelled savagely at the thug, “It’s not just the two of us. There are more than two hundred Twi’leks here ready to tear you limb from limb now that you’re the only one left with a gun and with no support! I promise you: KEEP FIGHTING AND DIE!” (Very successful Coercion roll for Numa.)

The last guard threw down his blaster pistol.

The battle was won.

Salvation of the Settlers

Something had fallen from Numa’s jacket.. It was a very old, beat-up, tooka doll. She scowled at Hondo, “What are looking at?”

Hondo looked away and muttered, “Nothing!” (A Rutian blue-skinned Twi’lek who was a child during the Clone Wars and had a tooka doll… Irfan, out-of-character- was suddenly aware of who Numa really was.)

Temza’anay and a contigent of settlers arrived and were awed at the outcome of Hondo’s plan. When news had spread, then entire community came out to celebrate the victory. The Twi’leks detained the unconscious Drombb and the surviving guards (including Zapnik). Limping back to Temza’s house, they were met by a bandaged but much healthier B’ura. He professed that Hondo was a great friend to the people of New Meen. If Hondo needed any help some day, the settlers would be honoured to aid him.

Numa mentioned that if it was true Drombb was backed by Teemo the Hutt, there might be negative repercussions later; to them and to the people of New Meen.

Hondo muttered, “Oh no.” The battle was won, but the war might have just begun. It was time to return to Nabat.