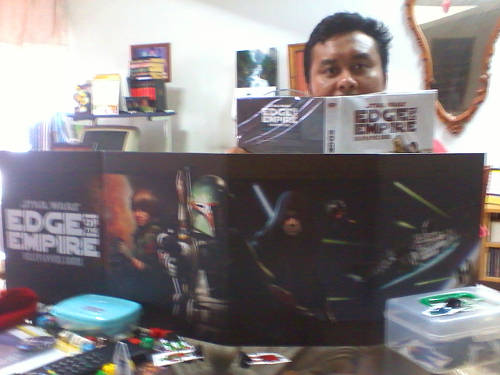 Some sort of happy gamemaster

Last Monday, Irfan and I finally continued his Star Wars Edge of the Empire RPG adventures. I ran The Long Arm of the Hutt free downloadable adventure (PDF download, low res version, 2.4MB) from Fantasy Flight Games’ website with some alterations to the story and non-player characters.

With the new EotE Core Rulebook, Irfan earlier created his own player character based on the Beginner Game pregenerated character Pash. His new PC in named Hondo Pash, a smuggler with a pilot specialisation, and purchased the Talents Let’s Ride, Galaxy Mapper and Skilled Jockey. He wields a DH-17 blaster pistol and a vibrosword. His story continues from Pash’s story from Escape from Mos Shuuta from the Edge of the Empire Beginner Game.

His Obligation was to the safety of his younger sister Yuzy Pash who lived on Tatooine. Fortunately, the Obligation was not triggered at the start of the game.

Previously, Hondo, who escaped the wrath of Teemo the Hutt – a crime boss based in the city of Mos Shuuta on Tatooine – by evading the Hutt’s thugs, Imperial stormtroopers and stole the Krayt Fang, a rust-colored YT-1300 light freighter that belonged to Trex, a Trandoshan bounty hunter. After a brief skirmish with TIE fighters launched from an Imperator-class Star Destroyer, Hondo made a short jump to lightspeed and escaped his pursuers.

Quick Pause at the Heliopause

The Krayt Fang reverted back to realspace at the edge of the Tatooine system. There were loud klaxons, flashing alert icons at the navicomputer and loud snorting and grunting sounds coming from the cockpit speakers. Worst of all, there was a nasty stench from which there was no escape aboard the ship. Hondo tried to determine the source of the spoor but failed. (And thus incurred a Setback die for every dice pool thereon.)

Hondo shut off the klaxons and the Gamorrean opera (he discovered on the audio player’s playlist). Then he found that one of the alert icons denoted that fuel was low. The navicomputer tagged the Ryloth system as the only location the ship could reach to refuel before fuel was depleted. However, he was unable to decipher the second alert icon.

The smuggler made the jump to Ryloth without any problem. (The Galaxy Mapper talent removed the stench-caused Setback die to the Astrogation roll.) 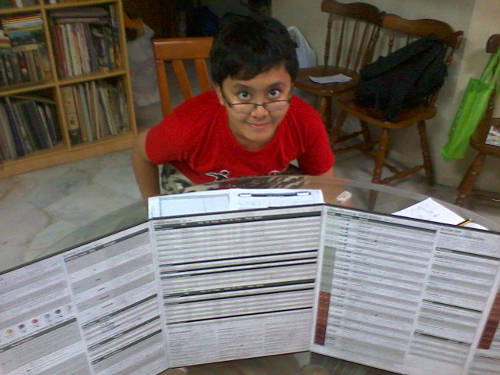 A smuggler before the GM screen

In hyperspace, Hondo discovered that Trex was holding a Twi’lek prisoner in a force cage in a cargo bay. The elderly male Rutian Twi’lek was fearful, physically weak and had his right lekku severed to a cauterised stump. When Hondo informed him that he had commandeered the Krayt Fang and detained Trex in another cargo bay, the Twi’lek expressed great relief.

The Twi’lek named B’ura B’an told his story. He was a homesteader at the settlement of New Meen in the badlands of Ryloth. A month ago, a human named Angu Drombb arrived with a group of armed men and mining droids. He set up a small mining centre on the foot of the hills on the east side of the town. At first he promised them jobs and income. But after taking a lot of the town’s resources – food and energy, he set up a secure compound around the mine, where only he and his men could enter. There were no jobs, only taking of resources and dumping of rock at the south end of New Meen. Most of the time, Drombb’s men dumped rocks behind houses and in their yards, as well as in the streets.

Also, it was discovered they were not mining any minerals, but the illegal spice ryll.

When B’ura approached Drombb to object of ryll mining and his mistreatment of the settlement, he sent for Trex. B’ura was en route to the city of Nabat when the Trandoshan arrived on the Krayt Fang, roughed up B’ura, amputated one of his head tails and captured him for delivery to Teemo the Hutt, his employer. A few hours after landing on Tatooine, Hondo had stolen the Krayt Fang with B’ura still in it.

Hondo promised to fly the Twi’lek to Nabat.

When the ship reverted out of hyperspace, proximity sensors flashed. Another ship, a G1-M4-C Dunelizard fighter had also reverted a klick to their aft and was closing in on them. Hondo piloted away from it but it still shadowed them. Suddenly the Dunelizard’s cannons opened up and tore a hull plate out of the Krayt Fang, sparks, debris and all. (The ship took 8 damage out of 22 Hull Threshold.)

Hondo told B’ura to take the controls and evade their attacker while he jumped up the turret. (His Let’s Ride talent made this climb an incidental move instead of a maneuver.) The Dunelizard sped up, but B’ura without warning looped and succeeded in positioning the ship behind the dumbfounded fighter. (A Gain the Advantage success which awarded a Boost die to Hondo’s next move.) Hondo fired and struck the bottom of the Dunelizard. A small explosion tore its cannon away from its hull and the fighter began spinning uncontrollably away from the Krayt Fang. (8 damage from 8 Hull Threshold.)

As they headed for Nabat unchallenged, B’ura wondered how they could have been tracked. Hondo shrugged off B’ura’s rhetorical question. (Oh, Hondo.)

They were greeted by a female Twi’lek named Nyn Kablo at Nabat. She welcomed Hondo and was grateful for returning B’ura who, to them, had mysteriously disappeared while en route from New Meen to Nabat. Kablo offered them food, drinks and medical treatment which B’ura was in need of. As Trex was taken away, he hissed to Hondo, “You’ll pay for this. You’ve taken my ship, but I’ll be back to take something you love away from you!” (Irfan balked at the idea of Trex abducting Hondo’s sister Yuzy.) There was a 300 credit bounty on Trex, which Kablo paid.

She also asked a favour of Hondo: transport B’ura back to New Meen to assure his people that help would come as soon as Kablo could wrangle up a group of trained fighters. As payment, she would get her outlaw techs to repair Krayt Fang. Hondo agreed and asked for one other thing: to have the ship repainted yellow and black, then renamed the Lava Jaeger. Kablo promised that new paint would be applied and the BoSS transponder hacked and altered by the time Hondo returned from New Meen.

But first he had good sleep for the night.

At this point there we took a break and continued on Tuesday. Apparently, the large infodump and the lack of combat (apart from the orbital battle) was taking a toll on Irfan’s attention. I would attempt to make it more exciting for him the next day.