Edge of the Empire:

Earlier today, I ran a short one-shot Edge of the Empire RPG session with my colleagues at our language centre using the Beginner Game pregenerated characters. I set up my gear at the lounge in my office, but for some reason I forgot the custom-made dry erase mat. So the poor paperminis had no terrain to stand on. Anyway, here is the story that was derived from the game played by three English language teachers. 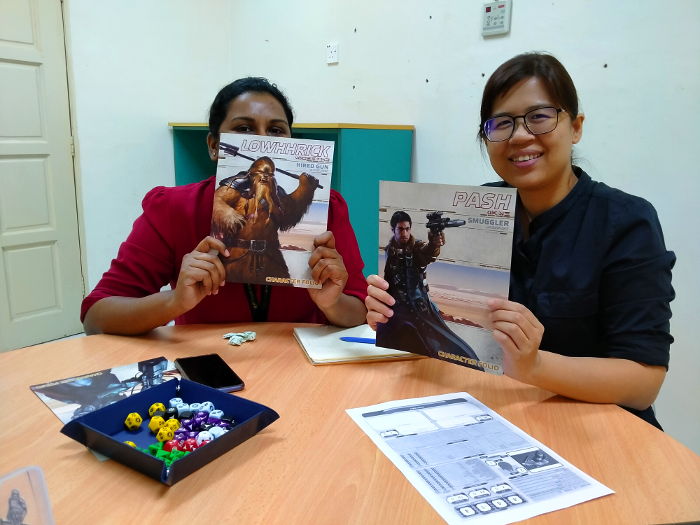 Pash and Lowhhrick together again for the first time

It All Started At The Wheel

Star pilot and smuggler Pash and his partner and hired gun Lowhhrick, a bulky and hairy Wookiee, strolled the commercial thoroughfare in the space station known as The Wheel located in the Besh Gorgon star system. Although their attire and gear identified them as dangerous outlaws, they were both in fact agents of the Rebel Alliance.

As they travelled, Pash told Lowhhrick that he still found himself unnerved by his break up with his girlfriend Tasha. There were many words unspoken since she left. Lowhhrick said in his guttural language of Shyriiwook that he felt the same about his father who left him when he was young. Pash asked him, “What’s your father’s name?”

Lowhhrick muttered, “Low Fat. He was the thinnest Wookiee ever.”

They met their contact in a dark booth of the Spiced Rum cantina who gave them their new mission. They were to retrieve a protocol droid designated 48-VEX. The droid had important information needed by the Alliance in their fight against the Galactic Empire. It would be a simple pick-up job. The droid was waiting for them at Warehouse 373 in the town of New Ulu Pauh on the planet Kinooine out in Wild Space.

The contact paid them a portion of their payment for the job. Lowhhrick was glad because he had no cash on him. Then they returned to the landing bay where their ship awaited their return. 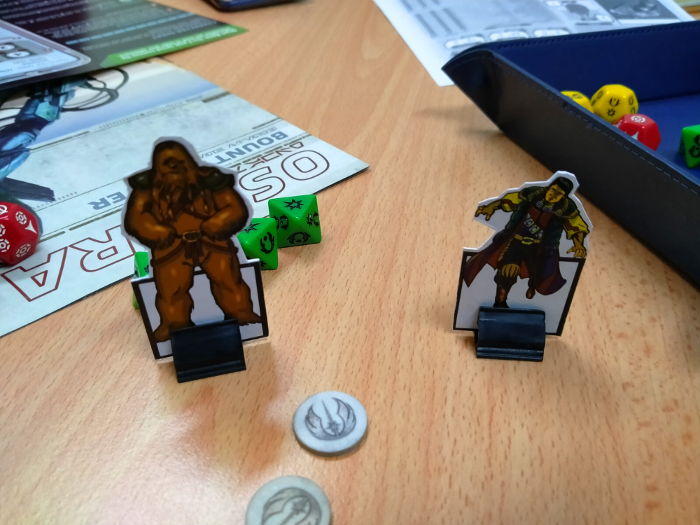 A Simple Pick-up Job No More

The orange-painted YT-1300 light freighter dropped out of hyperspace and flew down towards the town of New Ulu Pauh on the arid, rocky surface of Kinooine. The ship, Nutritious Carrot, acquired permission to land on one of the town’s outer landing platform and set down carefully.

They were immediately met by a port officer. After agreeing to pay berthing and refuelling charges, the duo went on their way into the town.

But first Pash stopped at an open air eatery to sample some local roti canai and teh tarik for breakfast. However, Lowhhrick refused the food. He told Pash he was on a low carb diet.

Soon after, they headed for the warehouse where the droid was waiting for them.

They found the door to warehouse 373 locked. Pash tried bypassing the electronic lock and succeeded. Within the warehouse were two Imperial stormtroopers standing guard! There was a quick gunfight and the Imperial troops fell. They investigated the empty building and did not find any sign of 48-VEX. 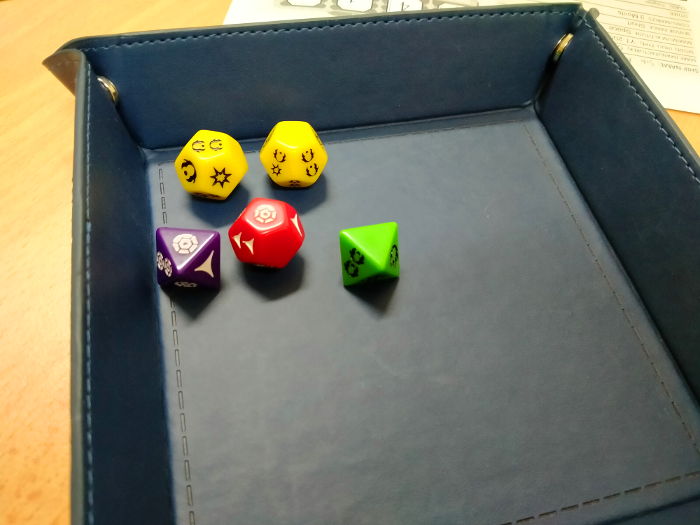 One of the stormtroopers possessed a datapad which displayed a map. It was a map of the region surrounding New Ulu Pauh. A bright red dot was travelling across the desert towards a cluster of hills. Beyond the hills was the settlement of New Arau.

Pash and Lowhhrick believed that the Imperials had captured 48-VEX and were taking him somewhere.

Across the Dusty Plains of Kinooine

The duo rented a pair of Ikas Adno speeder bikes, namely a Starhawk and a 22-B Nightfalcon and raced across the desert after the dot on the map screen. But then the trail went cold and the dot disappeared from the map near the Jerneh Hills. Instead of investigating further, they returned to New Ulu Pauh and raised ship.

With renewed vigour, the Nutritious Carrot roared across the afternoon sky towards New Arau. As they passed Jerneh Hills they were unable to spot anything from their altitude.  Setting down in the less-monitored landing fields 30 minutes later, Pash and Lowhhrick went out and bought a used DZ-70 tracker droid to help them.

The tracker was a fist-sized globular droid that hovered on repulsorlifts which allowed it to fly and search for targets easily. It also had powerful searchlights. Both Pash and Lowhrrick could deliver orders to it via their wrist controls.

Then they returned to Jerneh Hills, the Carrot landing in a billowing cloud of dust near the rocky foothills. With the droid’s help, they discovered an abandoned landspeeder hidden among the large slabs of rock at the base of the hill. Weapons drawn, they both approached the speeder. It was then that they spotted a cave entrance located beside it.

Lowhhrick shrugged and ordered the DZ-70 to lead the way. 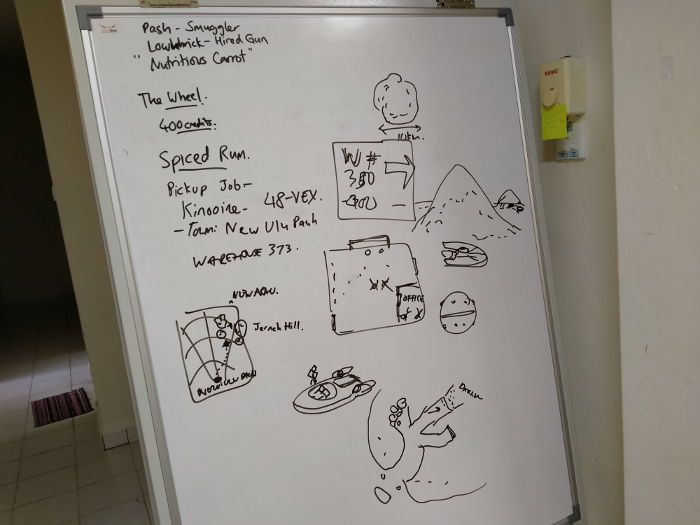 The cavern went on for a short distance, then split into three smaller tunnels. The silent DZ-70 illuminated the way with its light. They went down the left tunnel and discovered that a rockfall blocked their path. They then explored the centre tunnel which went deeper underground, until a huge, dark body of water blocked their path.

The murky waters had too ominous a look for them to attempt to enter it. Were there monsters waiting for them beneath? They would know not as they retreated back to the junction with their hovering droid.

The third tunnel also sloped downwards although not at so severe an angle. The winding passage went on for a few minutes and terminated at a closed door.

The door appeared to be a small security door of Imperial military design, and was built into a well-lit alcove in the rock.

Pash and Lowhhrick were both astonished, yet they readied their blasters and advanced to the door.

The tracker droid rushed in, followed by Pash and Lowhhrick. They both froze. 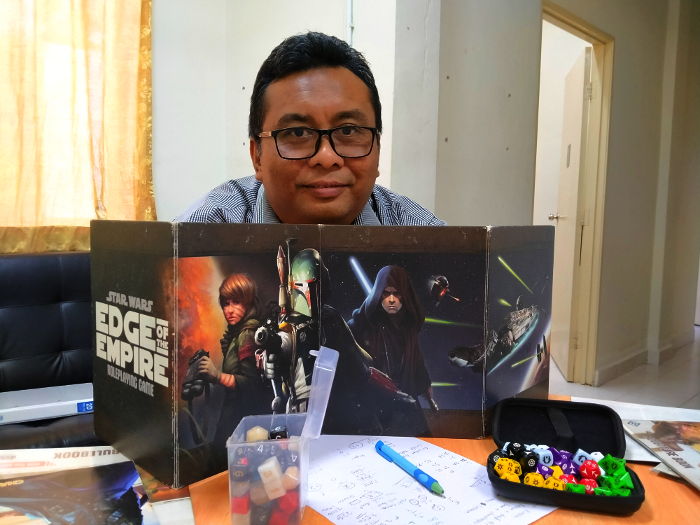 Some galactic gamemaster at his office

The floor of the cavern was roughly a circle 10 metres in diameter, and its walls curved five metres upwards to form a dome-like structure. The room was very well illuminated. They saw a droid strapped to a metal structure built on a raised platform. The green-painted bipedal droid was surrounded by eight stormtroopers, who immediately pointed their E-11 blaster rifles at them.

There were two heavily cloaked and hooded individuals standing near the restrained droid. They both spun to face the newcomers and pulled back their hoods, revealing a woman with a dirty feather cut hairdo and a scar across her left eye and a tall black furred Wookiee with dreadlocks who looked quite thin despite his bulk of fur.

Pash blurted out for both himself and Lowhhrick, “Tasha? Low Fat?”

To be continued…. maybe.