One of the things that I looked for immediately after watching Transformers was the soundtrack CD. I was disappointed that there was only Transformers: The Album released which had, you know – a bunch of songs. The Linkin Park song What I’ve Done wasn’t too bad. So were the songs from Goo Goo Dolls and Smashing Pumpkins. But there was not one track released that had the movie’s orchestral score as composed by Steve Jablonsky. In fact there was no score soundtrack album at all.

I’ve been monitoring the online news about the status of the score soundtrack. On or off? There was an online petition, but would it work? Sifting through a ton of information in the internet I found only an mp3 of Jablonsky’s Decepticon theme on the web.

And there was nothing on Amazon.com… until last month or so. And as of last week, it’s been released. 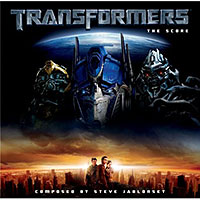 So, I’ve finally got it and I discovered that I wasn’t wrong about the score at all.

When I first watched the movie, I realized that it had distinct Hans Zimmer-esque rhythm, but it also had some outstanding melodies as major themes for the movie. By my second viewing, I’ve already isolated four themes: The opening scene theme (also repeated during the first assembly of the Autobots scene), the 6/8 male choral Decepticon theme, the slower theme heard during Bumblebee’s capture and the Autobots discussion scene at Griffith Observatory and of course theme from the uplifting and inspiring Autobots arrival scene.

Well, of course it was Hans Zimmer-esque. I later discovered that Steve Jablonsky is part of Hans Zimmer’s Remote Control Productions.

There are only three points I will make about this soundtrack CD:

The entire CD is awesome. Even the playful music where Sam and Miles head for the lake with Bumblebee which I did not like in the cinema (“Sam at the Lake”), actually sounds good and has a great flow.

The orchestration is much more inspiring then when you hear it in the cinema. There are beautiful theme melodies performed with cello and flute. Each track seems to tell a story, much like John Williams score of old. He’s more rhythm than melody nowadays. Even “Across the Stars” for Attack of the Clones, doesn’t sound like a piece that tells a story with music as good as his old Star Wars classic pieces. But I digress. Anyway, some of the tracks can be attributed to some scenes, but are extended. Case in point, the first track “Autobots”.

There are a whole bunch of distinct themes despite the early complaints online about the score being bland and themeless. The forementioned “Autobots” and “Decepticons” are but two. “Arrival To Earth” has a great extended section where Jazz adopts his Pontiac Solstice alt mode. But the best track was “Optimus”, which can be heard during the Autobots discussion at Griffith Observatory. The melody that was suppressed to make way for spoken lines and restored for the piece as a concert suite is spine chilling.

I seriously hope that Steve Jablonsky is given the opportunity to explore further the themes he created for this movie and create new ones in the sequel.