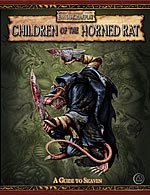 Children of the Horned Rat

Congratulations to Gary Astleford for getting the book he co-wrote for Black Industries, Children of the Horned Rat nominated for 3 Ennie awards. The nominations are for Best Interior Art, Best Writing and Product of the Year.

Product of the Year is a hell of a big deal, of course, but I am very proud of him for the nomination for Best Writing. I seem to remember a conversation with Gary a long time ago. It was on how gaming products nowadays focus too much on rules, or intersperse rules with fluff on the campaign world… as opposed to try not breaking the fourth wall and write the book as if it was genuinely from that campaign universe. Then finally have all the custom rules for the book and such be an afterthought but easily accessible and indexed when required.

Now, going by the subtext of the Best Writing award, which is, “Awarded for the book containing the best prose and descriptive text (ie.”cream” or “fluff”)”, I’d like to think Gary had a lot to do with it.

Was Brown Jenkins a skaven?