I’ve already run Star Wars Edge of the Empire RPG Beginner Game adventure for Irfan, so now I would see how it would fare with half a dozen experienced tabletop RPGers, namely the guys at GOKL.

From the available pregenerated characters in the adventure Escape from Mos Shuuta, Ivan played 41-VEX as a manumitted medical droid, Razzman played the Twi’lek bounty hunter Oskara, Macx played the Wookiee hired gun Lowhhrick and Doug tweaked Pash the smuggler into Nora Romanova. Darren and Kai jury-rig a character generation using the Beta rule notes found online and became, respectively, Qillian Ryn the Triannii assassin and Darter Kel the Zeltron scout and bush pilot. I might have screwed up the chargen a bit because of lack of complete rules.

The adventure’s encounters are designed so GMs and players get the hang of the system. For example, the first encounter teaches us about options on hiding in a cantina. The second encounter takes us through combat with a drift of Gamorreans. The third forces players to interact with NPCs to acquire a gear important to the story. 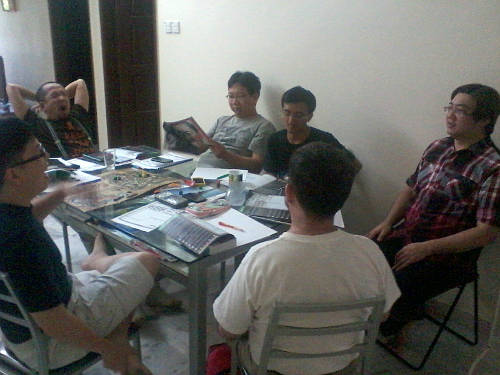 Nora, Oskara, Lowhhrick, 41-VEX and Qillian had crossed the local crime lord Teemo the Hutt, and Teemo’s band of cudgel-bearing Gamorreans were now combing Mos Shuuta for them. The group ducked into the Devaronian’s cantina to look for the pilot they hired beforehand, namely Darter, just before Gamorreans spotted them and chased in after them.

Oskara flipped a table. Nora jumped over the bar. Qillian slipped his knuckledusters on and crept into the shadows by the doorway. VEX orders a drink – a pitcher of motor oil. Darter, following the band of newcomers’ example bounded to the dance stage where the Twi’lek dancer was dancing by a pole. He immediately tried to charm the pants off her.

As the pig guard burst in, the person with the keenest eye, fastest reflexes and swiftest hand moved first. It was VEX. He cooly downed his drink much to the bartender’s slack-jawed surprise. However, the guards saw Oskara who was already behind the flipped table with her blaster rifle ready. She had the advantage and blew a hole in the lead Gamorrean. From the stage, Darter wriggled his butt, reached into his tight pants and a dart gun appeared was in his previously-bare hands. He took a firing stance and shot a dart at another Gamorrean, which sadly bounced off his thick bacon-smelling hide. Nora popped up from behind the bar and fire a wounding shot into his shoulder while Qillian snuck up from behind the Gamorreans and punched one with his knuckleduster, dazing the pig guard. All had fallen but one, who turned to the one who had shot him: Nora. But then VEX drew his blaster, spun and fired. The last thug fell.

Nora introduced Darter, their new pilot, to the group and the horrified Devaronian bartender yelled at them to get out of his bar. Darter explained that he too was in Teemo’s bad books for seducing Teemo’s daughter. The others would have lost their lunches at his story if they had eaten something for lunch. 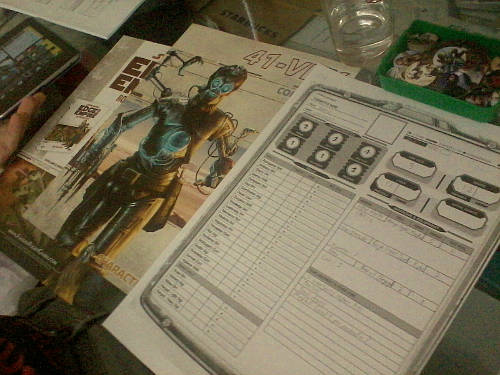 Darter was aware that the freighter Krayt Fang was docked at Landing Bay Aurek. Her captain was the Trandoshan slaver named Trex, an associate of Teemo the Hutt. The ship was grounded due to a damaged Hypermatter Reactant Igniter (HMRI). The group went to the the local junk dealer Vorn to get one of the devices, then planned on stealing the Krayt Fang. Vorn, after violently mistreating his R5 droid causing VEX to seethe with droid fury, told them that he had promised it to Captain Trex. Because Trex is Teemo’s buddy, he would not want to sell the last one to someone else. But they successfully bluffed the dim-witted Vorn by telling him that Trex sent them to get the HMRI.

When they exited the junk shop, they discovered VEX trying to preach to the brother R5 the virtues of being a free droid, free from the heavy yoke of organics and their memory flushing tyranny. The R5 seemed enthused by VEX’s speech and gestured at his restraining bolt. VEX, with an exclamation of hallelujah, unfolded his tools (from his crotch, by the way) to dig into the bolt to remove it from the R5. Suddenly, sparks flew out of the droid’s every crack and seam, followed by a big billowing cloud of smoke. The R5 went inoperative. Vorn ran out from his store and started yelling at them for breaking his droid, threatening to get Teemo involved. Darter’s dart gun quickly felled Vorn like sack of potatoes and they dragged him aside.

They then thought it would be prudent to hurry toward Landing Bay Aurek at the northeastern corner of town.

As they hurried along, Oskara informed the team that the ship would have docking clamps engaged and they would have to unlock them before they could steal and fly the Krayt Fang away. A plan was formulated. Oskara, VEX and Darter formed the group tasked with securing the ship, while Nora, Lowhhrick and Qillian would attempt to sneak into the spaceport command centre to remotely unlock the docking clamps. 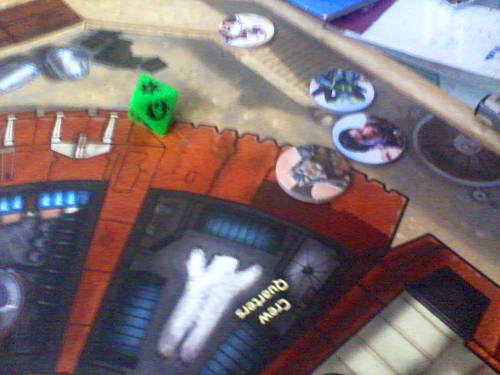 As a single Lambda-class shuttle flew into town from the sky and landed in Bay Besh at the other end of town, the Krayt Fang team trotted to Landing Bay Aurek. Peering in they saw three Gamorrean guarding the interior of the bay. The docking clamps and the roof bay doors were tightly secured. So, they bluffed their way in, telling the Gamorreans they were sent by Vorn to deliver the HMRI. The Gamorreans escorted them down the ramp, onto the sandy bay floor and around the YT-1300 freighter toward her entrance ramp. They convinced the Gamorreans to help them move some crates so they could gain access to the engineering deck, and when the pig guards were off guard VEX and Oskara blasted them. As Darter darted to the cockpit, VEX hauled the Gamorrean corpses into the cargo hold.

Darter then came face to face with Captain Trex who was about to investigate the loud noises. Darter quickly adapted to the situation by attempting to seduce the reptilian slaver captain. One would think a Zeltron might have a snowball’s chance in hell seducing a Trandoshan, but Darter charmed Trex’s pants off… literally. As Trex moved closer, Darter inserted his hand into his tight pants, wiggled and jammed a dart gun into the slaver’s chin. He promptly surrendered as Oskara walked into the cockpit, saw the two half-naked persons and quipped, “And you didn’t invite me?”

Oskara hauled Trex off to be locked in the cargo hold.

Meanwhile the other team sneaked into the spaceport command centre and discovered two droids manning the control station. Large panoramic windows showed off the desolate, dry landscape of Tatooine. Nora thought it would be wiser to approach them. But she could not talk the droids into releasing the Krayt Fang’s docking clamps as they have not received confirmation from Teemo. Instead, the droids called upon their Overseer, an energetic elderly human who waddled out his office and was instantly enamoured with Nora.

Soon, Nora was in the Overseer’s closed-off office, Qillian and Lowhhrick left out in the control centre hall with the two droids. Nora sweet-talked the Overseer into telling his droids to unlock the Krayt Fang’s docking clamps then forbade Nora to leave his office. He kicked the wall which folded down into a bed with mattress and a bottle of ale in the nook. Nora seductively persuaded the Overseer to remove his shirt and climb onto the cot belly down. Then she reached for her blaster, set it for stun and loosed a bolt onto his back, silencing him.

When the door slid open, Nora saw that Qillian and Lowhhrick were already turning the droids into scrap with blasters and knuckle-dusters. Nora then activated and locked the docking clamps at Landing Bay Besh so the Imperial shuttle was grounded, and finally she fired on the console. Warning strobes and klaxons blared. The trio ran out to look for a landspeeder, but there were none, so they ran for Bay Aurek before Teemo’s people and the Imperials came to investigate. Nora used her comlink to inform the other team that their mission was accomplished and they were hightailing it to the Krayt Fang with alarms screaming. 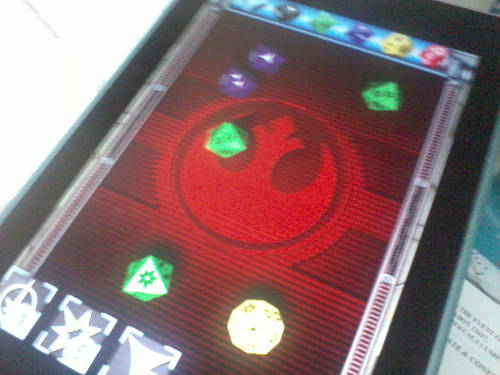 Meanwhile, VEX had already installed the HMRI in the Fang‘s engine room while Oskara made herself comfortable in the dorsal turret seat. Darter headed for the bay control room and opened up the roof hatch. He was running back to the ship when a comlink signal from the other team informing them of three Gamorrean guards about to enter the Bay Aurek. Nora, Lowhhrick and Qilian were about a couple of dozen paces behind the Gamorreans. The guards stumbled into the bay doorway just as Darter was running down onto the bay deck. Oskara thought it would be great to fire the cannon at the guards.

There were two simultaneous large explosions that blasted away the corner of Bay Aurek where the entrance was. Debris, flame and ash shot out across the street damaging buildings and vehicles nearby. The shockwave flung Darter into the floor as parts of the adobe wall and entrance slammed into his back. He found himself bloodied but alive as Qilian, Lowhhrick and Nora coughed their way unharmed into the demolished half of the landing bay.

Nora raised ship and the Krayt Fang soared into the late Tatooine afternoon sky, just before Imperial stormtroopers from the shuttle arrived with blaster rifles ready.

VEX tried his best to fix the Hyper Matter Reactant Igniter as a flight of three TIE fighters from a Star Destroyer in orbit some distance away dropped behind the Fang as they left the atmosphere. Oskara and Darter, manning the turrets, sent bursts of blaster fire at the pursuers. As the TIEs close in on them, Oskara’s barrage killed one. VEX, who finally got the last cable attached to the HMRI, finally connected it device to the navicomputer. He flipped the switch, but nothing happened. At the astrogation console in the cockpit, Nora was still unable to make the hyperspace jump calculations.

The remaining TIEs attempted to speed closer, but Nora skilfully swooped out of their path and gained ground. Lowhhrick stationed himself at a window and started barking verbal assistance to the gunners, allowing Darter to kill a second TIE. The remaining TIE fired its cannons, but Nora evaded the deadly green bolts.

VEX then fixed some loose wires as well as violently thumped the HMRI with a pipe repeatedly, which caused the navicomputer to come alive. VEX’s fix was so triumphant that Nora only needed ten seconds or so to program it. Oskara had only badly damaged the last TIE when the hyperdrive’s green lights blinked.

Nora pulled the lever and the Krayt Fang jumped into hyperspace and into safety.

What happens next? To be continued? Or not? I have no idea. But I do have this strong wish to be able to buy the Edge of the Empire rulebook when it’s released. More so than when Wizards of the Coast released the Star Wars RPG with their d20 and Saga rules.