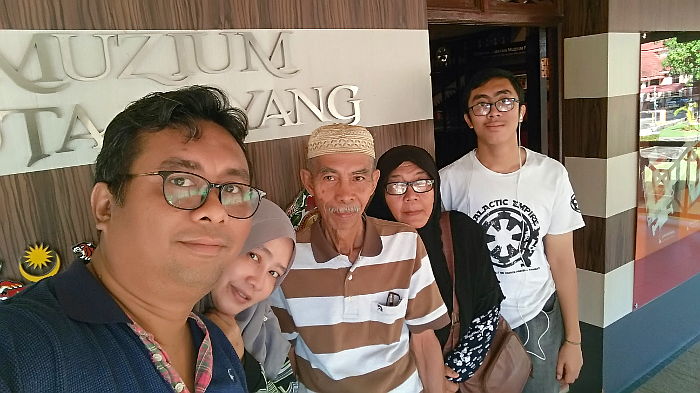 There are a number of traditional melee weapons that originate from the historic kingdoms of South East Asia. Here are some of them displayed at the Kota Kayang Museum near Kuala Perlis. When Atok and Opah came for a visit we took them to the museum to look at the exhibits. There are more than just weapons on display, but this post will be about the traditional weapons available there. 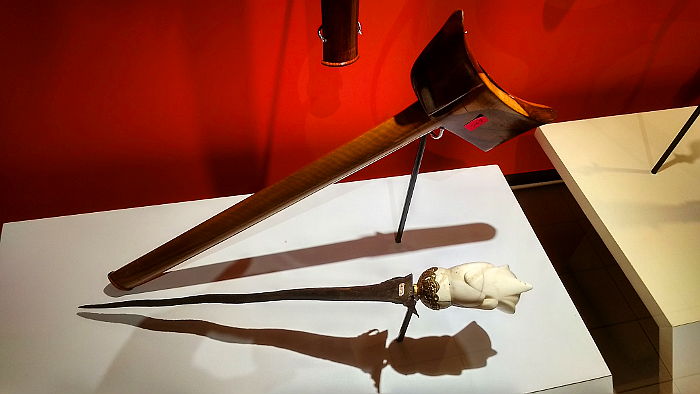 Here is a classic weapon from the South East Asian region: the keris. The keris has a wavy blade. Each crest of the wave is called a luk. A keris can be classified by the number of luks it possesses. Some keris, like the centrepiece at the Pasir Salak Historical Tunnel museum keris section, can be as long as a man is tall. (No images of it because we were not allowed to take photographs there.) 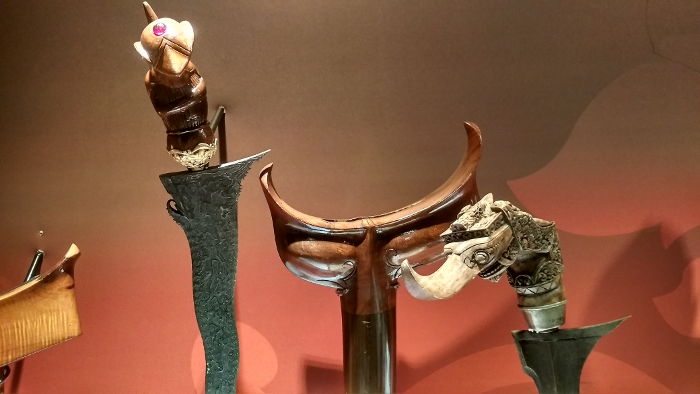 The pamor (metal patterns) on the bilah keris (blade) on the left here looks fantastic. The blade’s kembang kancang (the curl that looks like an elephant’s trunk) with the jenggot serrations on its outer edge is also visible on the left side of the blade’s base. 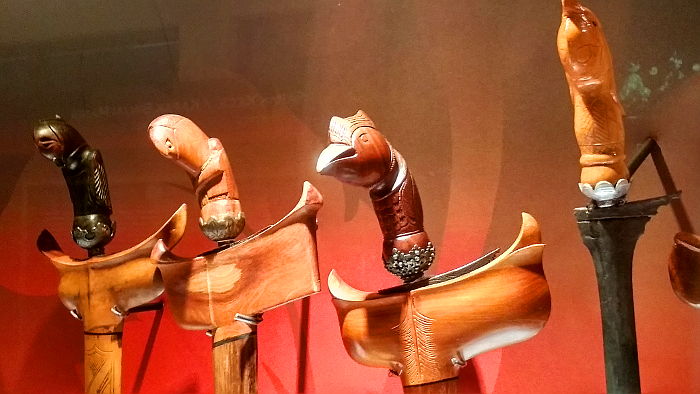 Among the designs carved for the hulu keris (keris’ hilts) are birds. I think that’s a parrot on the left there. 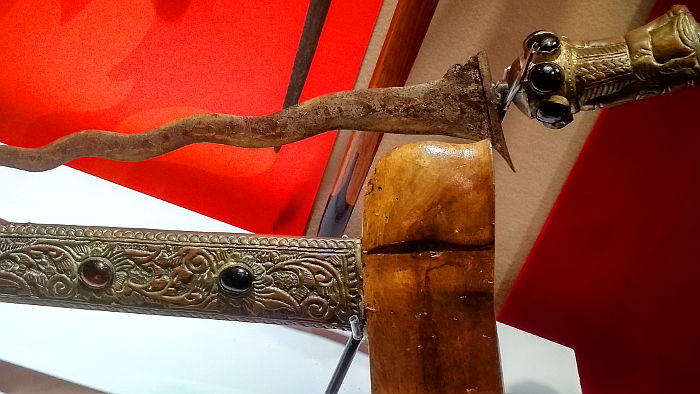 This keris has a stones inlaid into its pendongkok (hilt attachment) and balang (thin, straight segment of the scabbard). The hulu is carved out of wood. The sampir (flared base of the scabbard) is not carved at all although there balang is very ornately carved. It is impossible for me to make out the pamir on the blade. 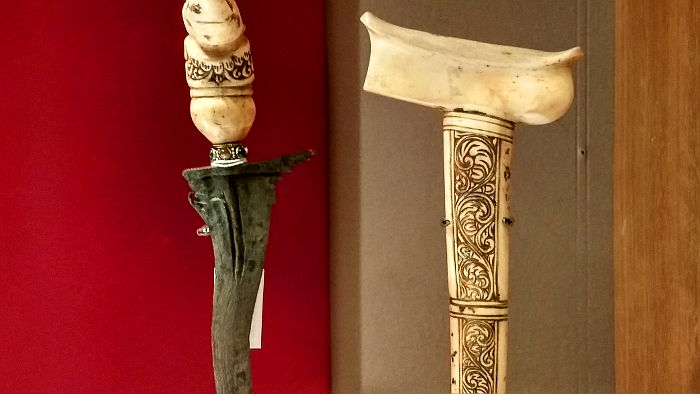 The hulu, sampir and balang of this keris appear to be carved out of ivory. 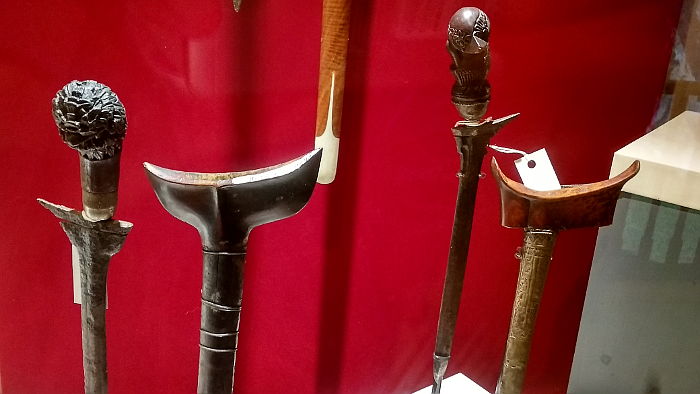 Here are some short keris with wooden hulu. 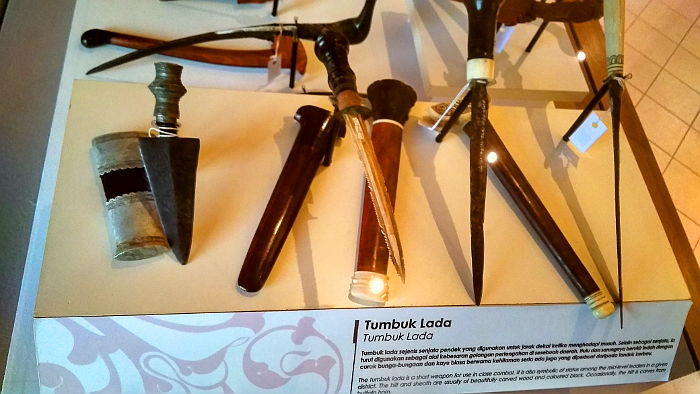 The short-bladed ceremonial weapon tumbuk lada‘s name translates to English as “chilli pepper pulveriser”. Make that as you will. 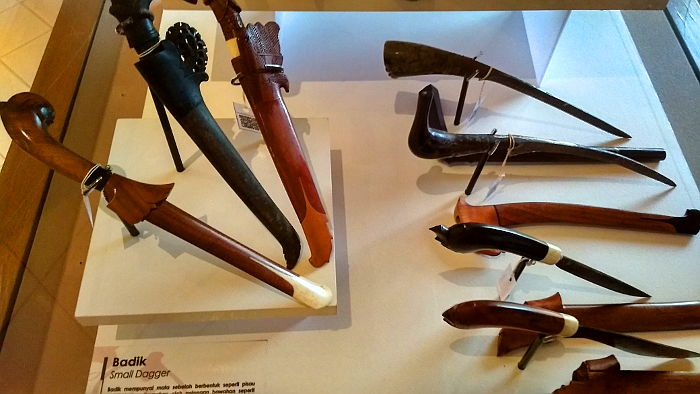 The badik is a weapon with a 20-30cm blade that has a hilt that is bent like a pistol grip. It is a thrusting weapon that could slash as well as pierce an enemy’s ribs. There are a variety of badik designs among the numerous peoples of the region. I have yet to learn why some weapons are named badik tumbuk lada which combines the names of the two previous weapons. 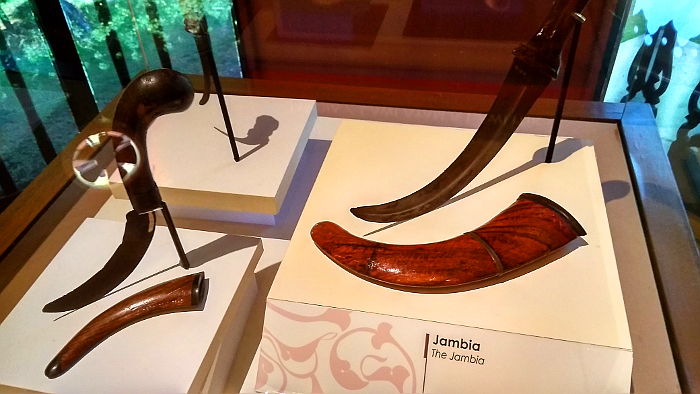 The jambia, also known as the janbiyah, originated from Yemen. It has a short, curved blade that fits into a similarly curved scabbard. 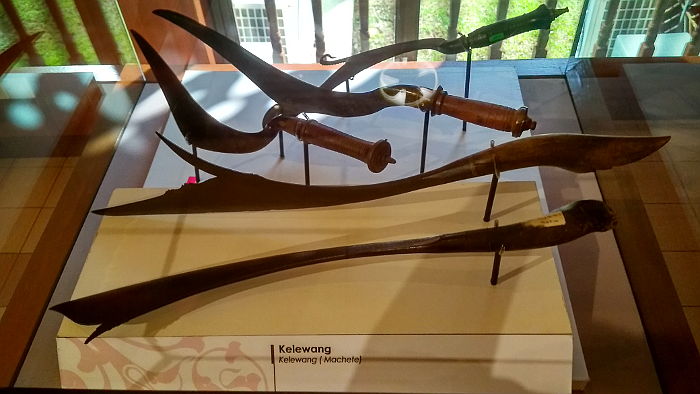 The kelewang is a long slashing weapon whose single-edged blade widens towards its tip. Some blades have a notch and a spike along its rear edge. 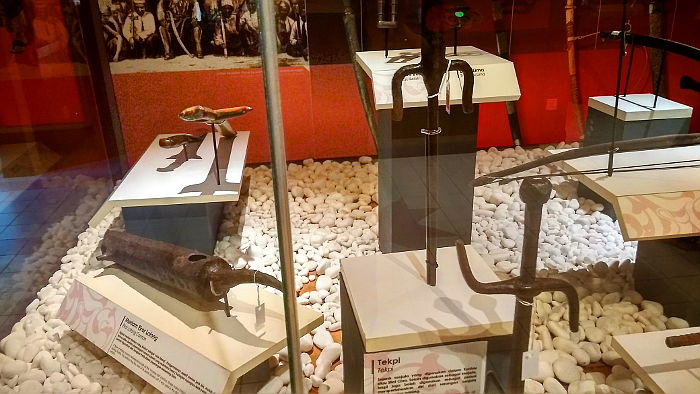 The tekpi is a sai-like blade weapon which can also be used to catch and even break attacking blades. It might have been introduced by travellers and merchants from the far east. 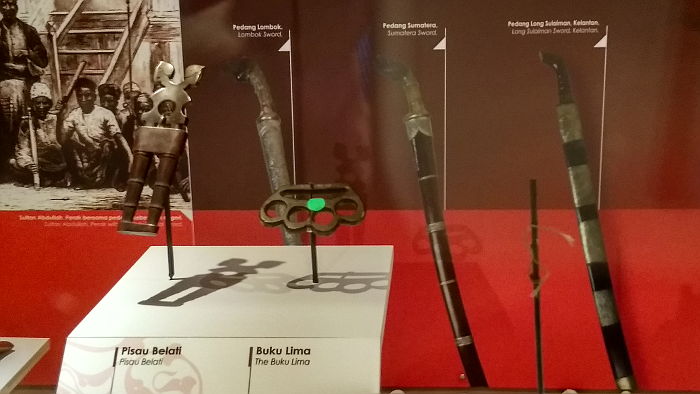 Pisau belati is a twin-bladed, close quarter weapon. It is small enough for an assassin to use, I gather. Also, the twin blades can also be used to catch and trap an enemy’s blade weapon attack.

The buku lima is a regular knuckleduster which can be used for extra damage when fighting with only one’s fists. Buku lima can be directly translated as “knuckles” in the context of punching.

On the right are a pair of pedangs (swords) with slightly curved blades. 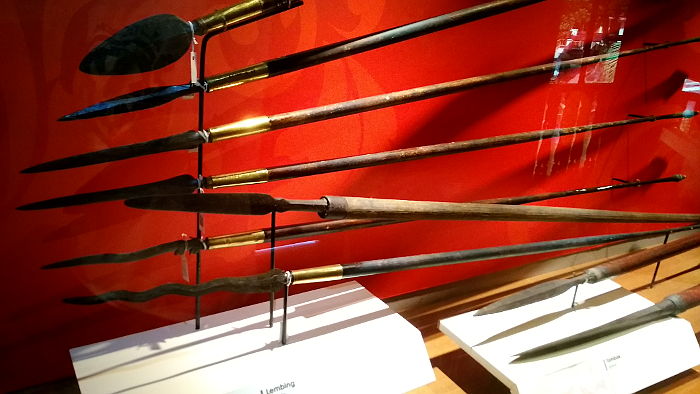 One of these lembings (spears) has luks giving it a wavy spearhead shape like that of a keris.

There are a number of weapons that are absent that I would love to display in this blog entry. Among them are melee weapons like the kujang, trisula (trident), parang (machete) and the kapak kecil, a small hatchet that could be wielded both as a slashing weapon and a stabbing weapon because of its sharp hilt. Additionally, it is said that with stretchable cords a user could throw the axe at a target and pull it back to his or her hand. With a poisoned axe head, a slight nick is all it would take to bring down an opponent.

I would also like to eventually write about historical firearms built and used in the region like the terakol (matchlocks), pemuras (flintlock blunderbuss) and lela (cannon).