In Eclipse Phase roleplaying game, I play the Neo-octopus Hokusai Tarnungshaut. Hokusai used to be in an uplifted octopus in an enhanced octomorph body.

After his death by postal bomb, he was loaded into a worker pod morph. Later, he farcasted into an arachnoid morph on Venus and died again there. Without knowing he died there once,  Hokusai farcasted again to Venus, this time in a slitheroid morph. This is what he looks like now. 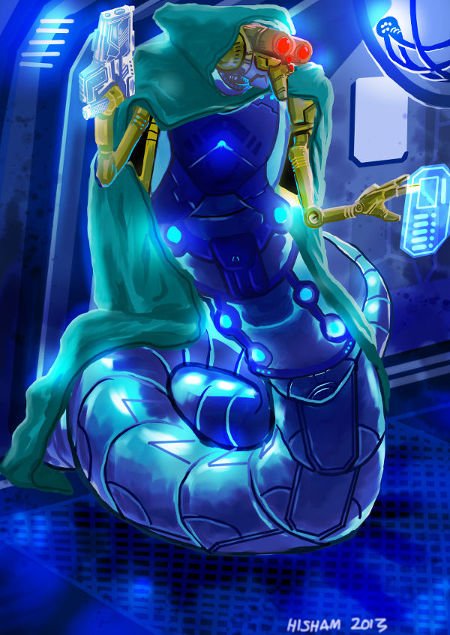 I heard you was dead, man!

While on Venus, Hokusai – after being a freelance troubleshooter in Fastball Express for many months – has decided to go back into the public eye as an artist, but this time with another fake online persona, and perhaps an art studio hypercorp. He feels like being safe from the Nine Lives cartel has made him slack off as an artist. All his uploads into the art social Mesh sites have been uninspiring in the interim. Will this catch the attention of Nine Lives? Will this inspire Hokusai as an artist?

In any case, it’s time to buy some f-rep.