Star Wars: The Complete Saga blu-ray set has been released and I have compiled a comparison of five screenshots between the DVD and its corresponding scene in the Blu-ray version. In each image, the DVD version is the top half and the Blu-ray the bottom half. Here follows a commentary on the above-mentioned screenshots.

As you can see, the opening crawl in the DVD when viewed in Blu-ray looks so much worse. The blackness of space seems to have been greyed out and smudged in a shape that could be a mountain. Seriously? Someone thought a mountain would look good in space? Even the text font has been changed, perhaps to accommodate extra details about some “Purple Death”, which I believe refers to General Tagge’s underpants. 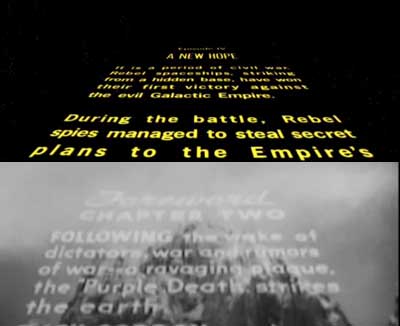 I think they changed the font

The picture quality is so bad after a transfer to 1080p that some of the characters on screen looks nothing like they did in the DVD (and theatrical) release of the movie. Even Obi-Wan appears to have lost his beard and wears a Conehead hat. Must be a new digital alteration! Bah! Thankfully See-Threepio looks somewhat the same. 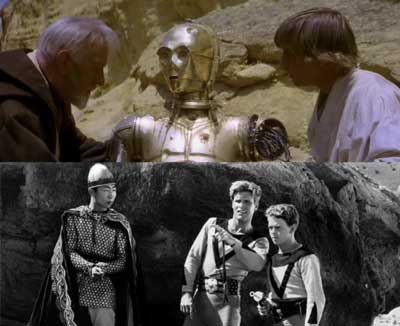 I prefer Threepio’s hair in the pic above

Everyone’s favourite YT-1300 now has a design which looks futuristic and better than before. However, in the high definition conversion, the image seems to have lost a bit of saturation. Again, the background is so blurred and smudged that Cloud City looks like a bunch of rocks. This is unacceptable! 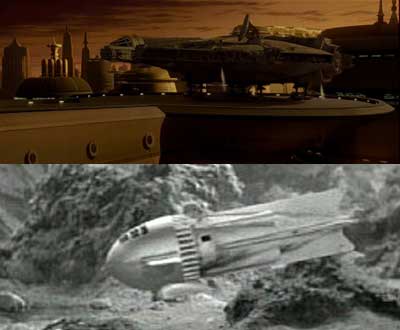 The CGI Falcon below looks realistic

In the first Luke vs Vader duel, the print is so horrible that you can’t see the lightsabre blades at all! And there seems to have been more digital alteration done to Vader’s helmet so he looks more like the Marvel superhero Thor. Another example of how the Blu-ray producers caved to current popular movies (in this case, this year’s Thor) and altered something so it’ll look like it’s “in with the times”! 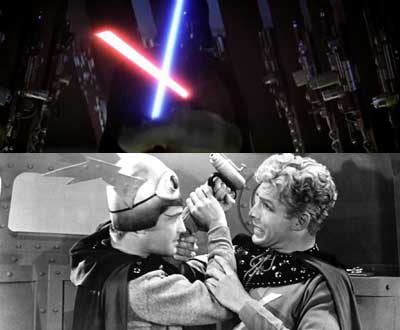 A fan favourite character, Boba Fett is now digitally altered so it would look less armoured, wearing slacks and – what are those – loafers? Also, whose idea was it to digitally insert rocks around the Pit of Carkoon? Now it totally looks fake! Blasphemy! 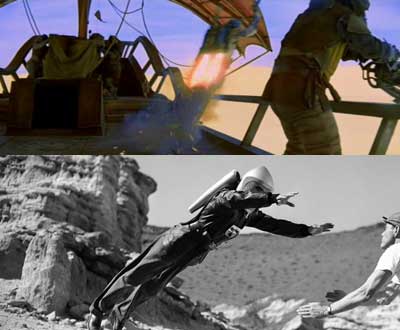 Jetpacks will be prevalent in the 1990s you’ll see

Disclaimer: Yes, fake article is totally fake; and no, I haven’t bought the Star Wars blu-rays yet because, man, they’re expensive from where I’m sitting. Blasted conversion rates. All hail the classic Republic Serials! Commando Cody in that last black and white image has even appeared in this blog once before!