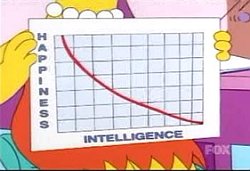 Lisa Simpson once claimed pessimistically in the episode HOMR, “As intelligence increases, happiness decreases”, and made a graph about it.

Without going into the intelligence territory for super geniuses like Albert Einstein, Richard Feynmann and Querl Dox, it’s apparent that every human possesses a certain amount of intelligence. As a human grows and develops, he or she learns more about the surrounding world, including things that is picked up in school and at work and media such as books and television. A human would learn, among other things, of science, history, geography, arts and literature, and of family, friendship and love.

Unfortunately, the human will also learn about the negative things in life such as pollution, greed, racism, war, and of course the inevitability of death. It would make it seem like life is a matter of jumping of a cliff in thick fog, hitting some tough branches on the way down and it’s just a matter of waiting to go splat. The outcome would either be a clean, controlled but earth-shuddering impact… or a rough, messy multiple impact which would spray your blood and bits of your flesh and bone all over the countryside.

When intelligence brings you down like that, it’s time to use your smarts. “Smarts” is a human’s ability to use its intelligence efficiently, employing a bit of knowledge and a bit of instinct. Smarts is knowing what parts of the school text book to read in preparation for an exam, instead of combing the entire book. Smarts is planning and executing a business process based on a human’s knowledge of its own business environment to maximise profits and minimise losses. Smarts is a human knowing when it is in love.

However, that’s still not enough. It would be enough when you can give me a list of all rich, successful people in the world and prove that every last one is content with life. Also, try to prove that everyone of the poor people in the world are miserable. You probably can’t because there are some on either side of the economic divide who are happy and others who are not.

Thus when intelligence and smarts aren’t enough, a human will need wisdom to be optimally happy with what it has in life. This is quite a difficult thing to control and attain. Before a human’s wisdom can attain a level of self-satisfaction, it has to undergo trial by fire. Even a human’s own ego is a huge obstacle to its wisdom.

A human must develop the wisdom to set realistic goals (which means knowing how to use its intelligence and rely on its smarts to achieve this.) If the effort is a failure, wisdom will make it be calm and rational enough to know when to cut losses, and to learn from the failure so it can make the attempt anew with no negativity based on lessons learned from the failure.

Which is why, I believe, a person need not be a rich or super-intelligent person to be happy with itself.

Thus, hopefully I’ve made my argument that Lisa Simpson’s bleak graph is flawed, if one considers every factor is a human’s life. And the future and the world can be viewed with a more optimistic outlook.

Posted in Rants, TV and tagged Rants, The Simpsons, TV.