Sunday was gaming day with GOKL and this time Ivan ran Eclipse Phase, the science fiction role-playing game with intriguing and extensive post-singularity and transhumanist ideas. Even running through the demo scenario in the free quick-start pdf, a lot of these high concepts shone through to us newbie players of the game, making the game even a more unique experience. (To be fair, I haven’t played GURPS Transhuman Space before to make a proper comparison, and the technology application in Eclipse Phase is much more high-concept than Shadowrun or Cyberpunk 2020.) 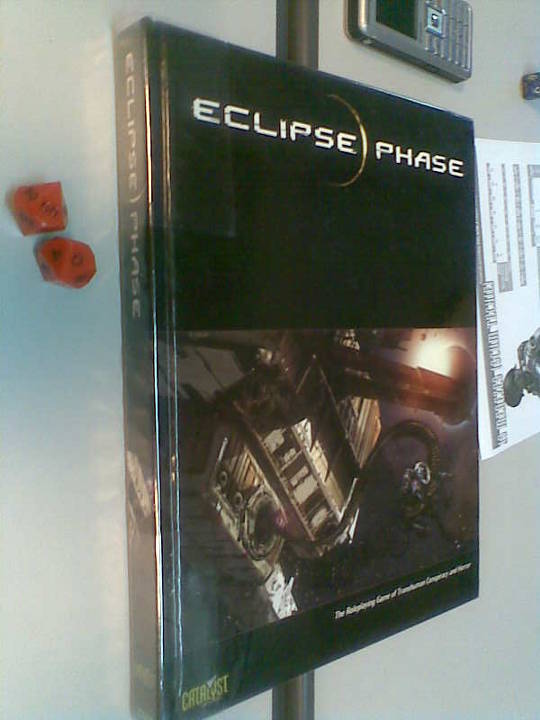 An “eclipse phase” is the period of time between when a cell is infected by a virus and when a virus appears in a cell and transforms it. During this period the cell does not appear to be infected, but it is.

The Eclipse Phase world is set in a future where advanced technologies exist that would awe you or horrify you or both. Some time in the past, humans of Earth developed cloning and genetic engineering, perfected nanotechnology and cybernetics, and created artificial intelligences – called TITANs – which turned upon their creators. These evolved seed AIs unleashed unspeakable weapons technology on the Earth and decimating the planet, before suddenly leaving en masse and disappearing into space. Where did they go, why did they leave, will they return and why did humanity discover what’s known as Pandora Gates in various locations in the solar system after they leave are huge mysteries to be solved.

On a macro level, humanity is divided into socio-political factions that range from the technologically responsible Argonauts, to the space-bound and wandering Scum, to the eugenics-driven Ultimates. In between the cracks, the criminal underworld thrives in the form of groups, like the Triads, Night Cartel and the nightmarish Nine Lives, which deals in illegal trading, replicating and enslaving of human souls and consciousness.

Yes, human “souls” are cheap and come in cans. A human Ego can be easily copied thanks to cortical stacks built into human brains that periodically archive your entire consciousness and memory. If you die, someone can easily remove your cortical stack and resleeve your consciousness (Ego) in a new body (Morph). This allow anyone with money to do so to be virtually immortal.

On the other hand, your cortical stack might be stolen by sinister parties, or illicitly duplicated and sleeved in other Morphs to be used as a slave on some colony. To try to deal someone Real Death, you have to shoot them in their cortical stacks. I say “try to” because you would never know if a person you shot has a copy of an old backup somewhere safe. A week later you might be facing his backup copy in a new Morph.

Or worse, 10 copies of the same Ego in various deadly Morphs trying to get revenge for killing him.

Humans with modified bodies can access the wireless Mesh, which is an omnipresent network of information used to store data, control remote hardware and communications. Modified humans are provided with a Muse – a virtual AI helper in their consciousness that does your legwork on the Mesh, like data-mining or attempt to break into a secure network as you perform tasks in realspace.

Resleeving in robotic forms or in cloned bodies are the most mundane concepts here. Human players can opt to be in spider-like Arachnoid Morphs (Tachikoma, yay!), the formless nanotech swarm Morphs (You play a talking, swirly cloud of doom), a Muse (the AI helper personality within the brain of another character), or an uplifted animal (like dolphins, gorillas, orangutans, octopuses and parrots.) How cool is that? You can play a space octopus with cybernetic implants which can surf the internet and use pistols to kill your enemies. Or you could play in a party where every character is a fork (duplicate) of one original Ego in multiple, differing (or the same) Morphs. 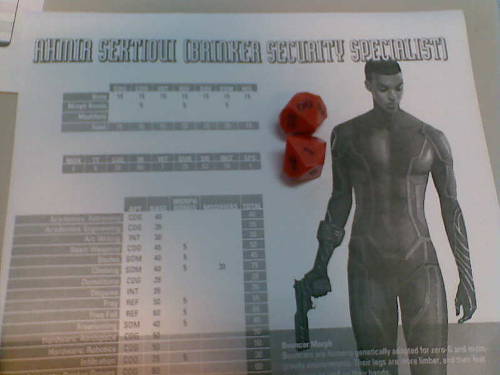 Gameplay was pretty easy, though it took a while for all us newbie players to figure out the concepts and how they relate to the game mechanics and the stats. Everyone has scores for Stats, Aptitudes and Skills. The basic mechanic is the percentile system. For example if your Kinetic Weapons skill is  45, then you have to roll 0-45 to succeed in shooting someone. Doubles, such as 33, 44, 55 are critical successes if below the score or critical failures if above.

I played Ahmir Sektioui, a Brinker security specialist who is of an Arab stock and also a Muslim. He has a Bouncer Morph which allows him to work in zero gravity better than others. Also he has grip pads implanted in his feet. Also, he really doesn’t have feet; he has hands (complete with opposable thumbs) at where his feet is supposed to be, allowing him to easily climb up and down zero gravity environment while handling multiple tools.

Other characters in the party include Gavin Gladwell, a criminal con artist; Zora Moeller, an anarchist saboteur; and Elis Menezes; a Scum techie. We all are – as it was deftly defined – agents of the Delta Green or the Global Frequency of the Eclipse Phase universe, an organization known as Firewall. 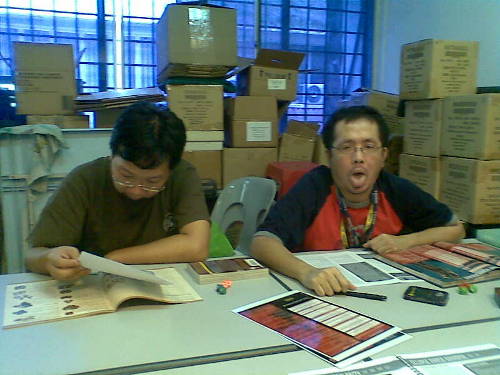 Players do not come with the boxes

The general description of the awesome session is as follows: The PCs meet on a Scum barge to investigate what might be an illegal art deal. Elis gets a tattoo. Investigations reveal that it might be an arms auction, not an art deal. We infiltrate the auctioneer’s cargo ship, docked to the Scum barge, as buyers to identify the merchandise. We are threatened by uplifted gorillas with guns. There is an battle with cheaply cloned, multiple insta-mooks in zero-gravity who try to kill everyone and grab the merchandise.

The merchandise casing is breached and release a deadly nanoswarm, a TITAN-era weapon of mass destruction. We shoot our way out. The nanoswarm starts eating everything and snake out tendrils to try to assimilate us. The barge jettisons the auctioneer’s cargo ship with us inside to prevent a barge-wide infection, and a ship with another covert Firewall agent fires a nuclear missile at us to destroy the infected ship. Everyone holds their breath and takes a walk in space without vacsuits – except Elis. She bought a suit earlier.

We see the nuke blast at an up-close-and-personal level in space. Radiation fries everyone to a crisp.

And then we move on to level two!

Incidentally, I now need a t-shirt that reads, “I played Eclipse Phase, I rolled a 99 and lived.”