Irfan played his first complete Star Wars Role-Playing Game adventure today, as everyone’s favourite intrepid astromech droid Artoo-Detoo. He was awesome at figuring out solutions to simple problems that were presented in the scenario that I cooked up. He even role-played Artoo well by having in-character conversations in regular robotic beeps.

We played on the living room carpet and I used the gamemaster (GM) screen for the first time ever, with the D6 rules and stats inserts I made. My coterie of white D6 were arrayed on the floor, while the singe red D6 served as a Wild Die.

The scenario was designed to be short and with minimal story twists.

Shortly after the Battle of Hypori that, Artoo-Detoo, the lone player character (PC), was sent by Clone Commander Cody for a mission. Orbiting the planet, say for story’s sake, Eiattu 6, Artoo’s task was to be flown from the Venator-class Star Destroyer Resolute to the surface of Eiattu.

There, Artoo will need to sneak into a Separatist safehouse containing a redundant tactical computer databank and hack into it to determine the position of Count Dooku and his fleet. 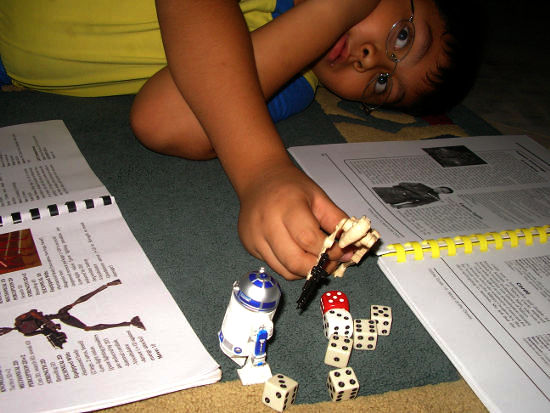 Artoo faces off a B1 battle droid

Artoo was supposed to be flown within a short distance of the safehouse in the hills, but the LAAT gunship he was in was shot by a ground-based missile. Before the gunship smashed into the landscape, I thought Irfan was going to get Artoo to attempt a controlled landing, but instead he did something I didn’t count on. He jumped.

However, he failed his rocket operations roll and slammed down hard into a sand dune. Thankfully his Strength roll’s Wild Die came up 6 twice! So Artoo shrugged off the damage which I attributed to sand absorbing the impact.

Using his sensors, he tried to get a fix on the location of the hill and the safehouse. But this time his Wild Die turned up a 1. I ruled that he knows the direction of the safehouse – which is south – but he doesn’t know how far it is. And it’s all desert as far as he can see.

After three hours of trudging along on desert sands, Irfan had Artoo roll over a dune which exploded to reveal a savage Kintan strider beneath. Winning the initiative, Artoo fired his cable shooter to try to entangle the beast’s legs and succeeded! However, the strider had a Strength of 6D and broke out of the cable trap. Artoo evaded a blow from the creature thanks to his relatively smaller size and spending character points, and tried to slash its legs with his circular sawblade, but again the strider’s tough hide protected it from harm. Irfan declared that Artoo would use his rockets to fly up and slash at the strider’s eye but its blow landed and Artoo came crashing down onto the sand with a definite wounded status: there were claw marks on his head and chest area!

Artoo attempted to flee the strider and hide under a sand dune while out of view from the chasing creature. The strider failed its Perception roll and failed to spot the hidden droid. After some time, Artoo proceeded south.

An hour later, Artoo came to a grassland. Soon there were small trees and bushes. All of the sudden, he was in a thick, forested area surrounded by tall trees. Soon, a river crossed and blocked his path. He fired his rockets and flew over the rushing water, but a large flying purple-yellow bird came out of nowhere and knocked him off his flight path. He spiralled down and splashed into the river. The fast-moving waters pulled him and before he went under, he saw that he was being pulled toward a waterfall!

He tried firing his rockets again, but they failed. So he let himself sink to the bottom and fought the current with his treads. Irfan’s successful Strength roll – despite the -1D penalty for being wounded – allowed him to reach the riverbank before he went over the fall. After shaking off excess water, Artoo continued south.

After another hour through the forest, he heard a voice pleading, “No, please. Don’t kill me.”

Sneaking closer, Artoo came to a clearing and a path where a lone B1 battle droid was threatening an unarmed human it had come across. The droid used its internal comlink to speak to someone and acknowledged that the human was probably a Republic agent and he had to be executed. Artoo rolled to the rescue by abruptly coming out of hiding and zapping the battle droid with his electroshock prod. “What the-,” began the astonished robot. After a brief period of yelling in pain, the battle droid fell motionless.

The man Artoo rescued was grateful and told him that he was a droid technician from a nearby town. He patched up Artoo’s damage with his tools. Artoo lost his wounded status. They said (and beeped) their farewells and the astromech droid continued south.

Soon, the forest ended. Trees became less dense and the terrain began to slope upwards. Artoo discovered the safehouse up the hill. It was guarded by a lone B1 battle droid. Irfan waited for nightfall before declaring Artoo to be creeping up the hill where boulders were lodged on the ground. At the right moment, he pushed a boulder off its resting place which rolled down the hill past the house and squished the battle droid into debris.

Artoo then quickly used his security skill to unlock the door. Inside the safehouse there was a cache of blaster rifle on the right wall, a holocomm device propped up against the left wall and a secure, encrypted computer built into the far wall. The computer was no match against Artoo’s computer hacking skills. 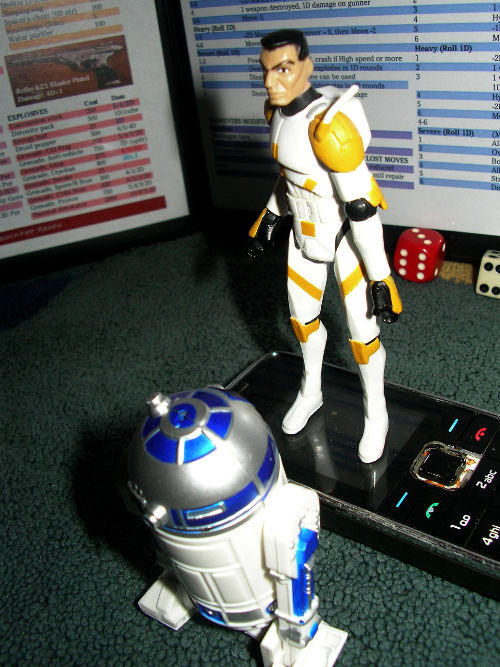 Cody should be glowing blue and lined with interference crackles

That was when Artoo discovered that the Resolute was in danger. A pair of Recusant-class light destroyers that belonged to the Separatists were about to drop out of lightspeed on top of the Resolute and blow it to bits with its shields inactive.

Artoo quickly downloaded the data and went to the holocomm unit to contact Commander Cody aboard the Resolute. Again, the holocomm’s security systems were overwhelmed by Artoo’s skills and the Resolute was warned just in time.

The two Recusant destroyers reverted in realspace and was surprised to see their turbolasers unable to breach the recently-activated shields. The Resolute destroyed one of the capital ships before the surviving vessel fled into hyperspace.

Cody told Artoo that a gunship was en route to pick him up at his location and thanked him for a job well done.

I awarded Irfan 8 character points after he used up most of his 7 original points during his fight with the Kintan strider.